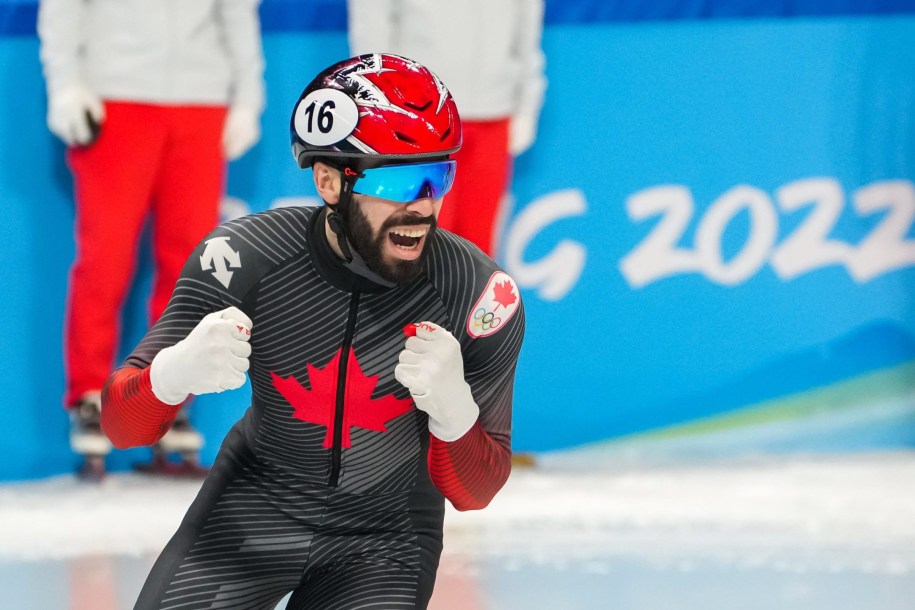 Patience paid off for Steven Dubois at Beijing 2022.

Skating in a crowded 1500m short track final, Dubois stayed steady in the back before making a move into the second spot with five laps to go. That second spot is where he would stay, edging Semen Elistratov of the ROC in a photo finish for silver.

“I knew that if I was smart in the race, use my legs and don’t make bad choices I could be there,” Dubois said. “That’s what I did. I did one pass, I guess two, but one big pass. And that’s all that it took to get a medal.”

Korea’s Hwang Daeheon won gold in the race that featured 10 skaters, four of whom earned spots through advancements. Despite the Olympic record-sized field, there was considerably less chaos than the three semifinals.

“When there’s 10 people in the race, you can’t really be in the back, because there’s no way you’re going to come back,” Dubois said. “You saw in this race, the top three skaters over there in the maybe last five, six laps, we all finished one, two three.

“I was going to go fast, because no one wants to be in the back.”

Dubois was one of the skaters that earned a spot in the final through advancement. Skating in the second of three semifinals, Dubois was in first place with 10 laps to go but then took a spill. Being in a qualifying position at the time, the Canadian advanced to the A final after penalties were assessed.

The wait for post-race confirmation that he’d advanced — giving him a shot at the podium — was a nervous one.

“It’s one of those things where I was in a position to be qualified for the A final and I couldn’t do anything about it,” Dubois said. “That moment I knew it was an advancement, but the announcer and the referee waited a long time, so I was starting to panic a bit after the race to be honest.”

Dubois is making his Olympic debut in Beijing after being a reserve with Team Canada in 2018. Two of Dubois’ current teammates, Charles Hamelin and Pascal Dion, teamed up to win bronze in the 5000m relay at PyeongChang 2018.

While Dubois was only an alternate back then, he feels training with that team and watching their success in PyeongChang created motivation.

“It felt like what I did the whole year was a small part of what they achieved (in 2018). I think it helped me motivate myself to get where I am now. I have to thank the last (Canadian) Olympic team and everyone who was there for the past four years.”

While he’s a first-time Olympian, Dubois has had success in the 1500m on the world stage. Dubois has won three medals in the event on the World Cup circuit since becoming a full-time team member in 2018-19. His best world championship result was a fourth-place finish in the 1500m event in 2019. Even with that success, Dubois said he had doubts in himself heading into the Olympic final — but a strong field brought out the best in him.

“I was shaking a bit when I got into the final. But I think having so many good skaters, it brought the best in me and that’s why I got to skate as good as I could and I got the silver medal. I’d like to thank all my competitors who helped me achieve what I did.”

Hamelin, meanwhile, received a penalty in his semifinal for a lane change causing contact, ending his opportunity to earn another Olympic medal in an individual event. Dion did not move past the semifinals.