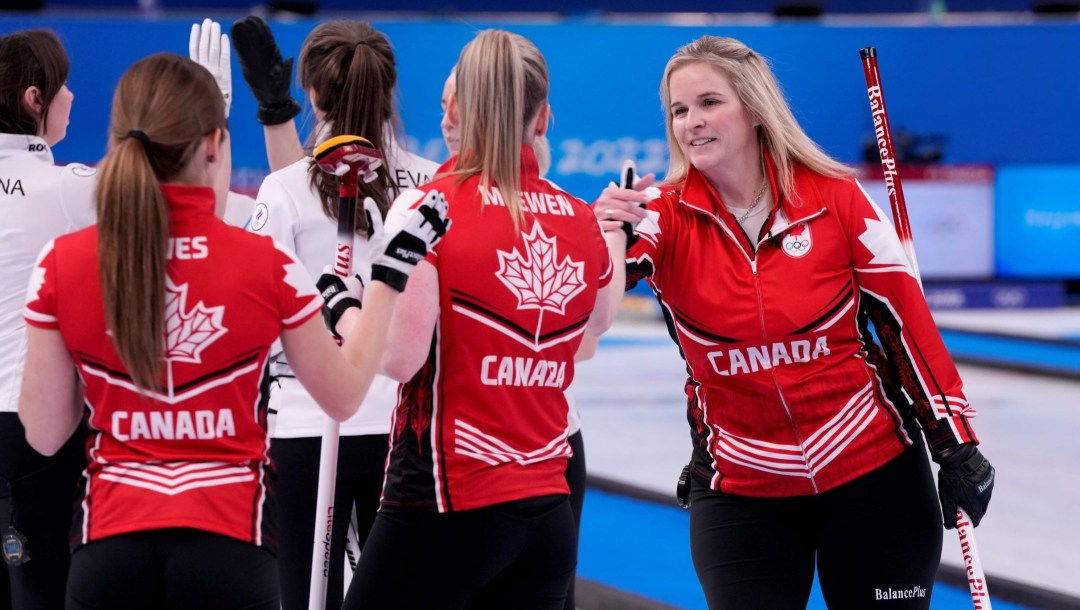 Jennifer Jones and Team Canada stole four points in the first two ends to beat winless Russia 11-5 to stop a three-game losing streak and improve their chances of getting to the playoffs in women’s curling at the 2022 Olympic Winter Games.

“One million percent we needed to win that game,” Jones said after the crucial victory that moved their record to 2-3. “That was an absolute must win. I thought we played well from the first rock to the last rock.”

“We got a couple of lucky breaks early, that definitely helped,” said coach Viktor Kjell. “But today was a real good game as a unit and as individual percentages as well.”

The Russian skip made her first successful shot of the game in the third end, slipping through a tight port to tap back a Canadian stone and sit on the button for a single. But she couldn’t bury her last-rock draw in four and Jones simply followed her down for a tap back to score two more for a 6-1 margin.

Russia got a pair back in five and were threatening in six until third Kaitlyn Lawes snuffed out their chance. Lawes went into the game with the lowest shooting percentage of all thirds and had made several key shots early, but none was more important than the double angled, double runback to take out a hidden Russia counter. That opened the door that led to Jones having a routine draw for two and an 8-3 lead. Lawes finished the game shooting 85 percent.

Team Canada got another steal of two in the ninth and Russia shook hands.

Jones, Lawes, second Jocelyn Peterman and lead Dawn McEwen went into the game after three tough losses to Japan, Sweden and Switzerland in which they had given up eight points in six stolen ends.

“Despite our record we were feeling pretty confident,” Peterman said of the team’s mindset going into the game. “The little breaks were kind of going against us and we had some breaks our way that game.”

In fairness, those losses were to the 2018 Olympic gold (Sweden) and bronze (Japan) medallists and the reigning world champions (Switzerland).

“It wasn’t that we were performing that poorly, we were just missing the wrong shots at the wrong time,” added Jones, who went into the game with the lowest shooting percentage of all skips, 71 percent, but improved that to 78 Monday. “We weren’t too disappointed in our play, we just had to come out and not make those mistakes.”

The Monday morning (Beijing time) win was vital to stay at three losses with four games remaining, including key matches against Great Britain and the United States. Canada’s other two games are against 2-4 China and 1-4 Denmark.

Canada is tied for sixth place with Korea behind 5-0 Switzerland, 4-1 Japan, 4-2 United States and Sweden and Great Britain at 3-2.

In every Olympics since 2010 there has been a playoff team with four losses. The issue for Canada, however, is if they end up in a multi-team tie, the tiebreaker is cumulative last stone draw and at the moment Canada is eighth of the 10 teams. The only two worst teams happen to be Great Britain and the United States, two of the teams ahead of Canada in the standings.