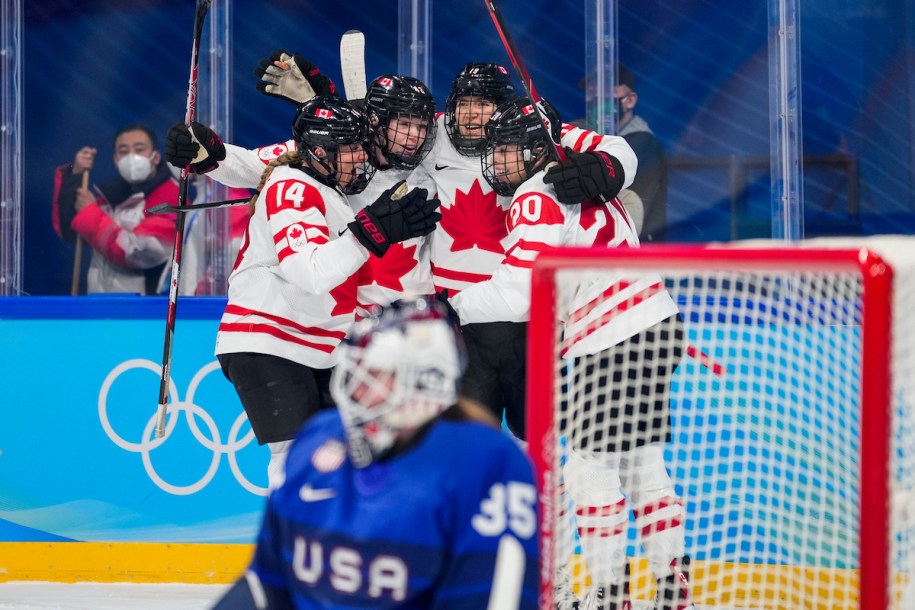 It’s been a historic Olympic Games for Brianne Jenner.

The three-time Olympian scored her ninth goal of Beijing 2022 in Team Canada’s 10-3 semifinal victory over Switzerland, tying the record for most goals scored in a single Olympic tournament. Jenner has played a key role in helping Canada to a perfect 6-0 record in Beijing — but a seventh win would be the team’s biggest.

Canada will face the United States, the defending Olympic champions, in the women’s hockey gold medal game Wednesday at 11:10 p.m. ET. The two rivals have met in five of the six previous gold medal matches since women’s hockey was added to the Olympic program at Nagano 1998 with the Americans winning the last one — 3-2 in a shootout — at PyeongChang 2018.

“I think we know that history, but we’re going to give ourselves a blank slate,” Jenner said about facing the Americans for gold. “We looked at it as an opportunity to go out there and claim a gold rather than looking at the history books and what has happened.

While Jenner leads the tournament in goals, Sarah Nurse leads in points, recording 16 (four goals and 12 assists) in six games. Nurse posted four assists in Canada’s semifinal victory and is looking to add a gold medal to the silver she won in PyeongChang.

“It is an exciting rivalry but our focus is we get to play another game,” Nurse said. “We came to play seven games and we wanted the last one to be the gold medal game.”

Nurse and the Canadians know they’ll need to have their best performance of Beijing 2022 in the gold medal game. Canada defeated the United States 4-2 in the preliminary round but were outshot 53-27. The team is also coming off a semifinal win that saw them give up three goals, the most they’ve allowed in any game in Beijing.

The United States enters the gold medal game with a 5-1 record in Beijing, their only loss coming to Canada. The team is led by Hilary Knight who has five goals and four assists.

Ann-Renée Desbiens has started four of Canada’s six games in net, posting a 4-0 record to go along with a 1.75 goals against average and .936 save percentage. Desbiens made 23 saves in Canada’s 3-2 overtime win over the United States in the gold medal game of the IIHF Women’s World Championship last August.

Marie-Philip Poulin scored the golden goal for Canada at that world championship and she’ll have plenty of attention on her in Wednesday’s contest. Not only does the Canadian captain sit second in tournament scoring with 14 points (four goals and 10 assists), but she scored the gold medal winning goals at both Vancouver 2010 and Sochi 2014.

Like Poulin, Rebecca Johnston is a four-time Olympian, debuting on home ice in 2010. After years of preparation and dealing with pandemic related challenges, Johnston says the team will be ready for one last game in Beijing.

“Everyone is excited and prepared,” Johnston said. “We worked all year for this, we worked so hard, so we’re going to be ready to go in that final game and really give it our all.

“That gold medal is definitely on our mind. That’s something we want to accomplish.”