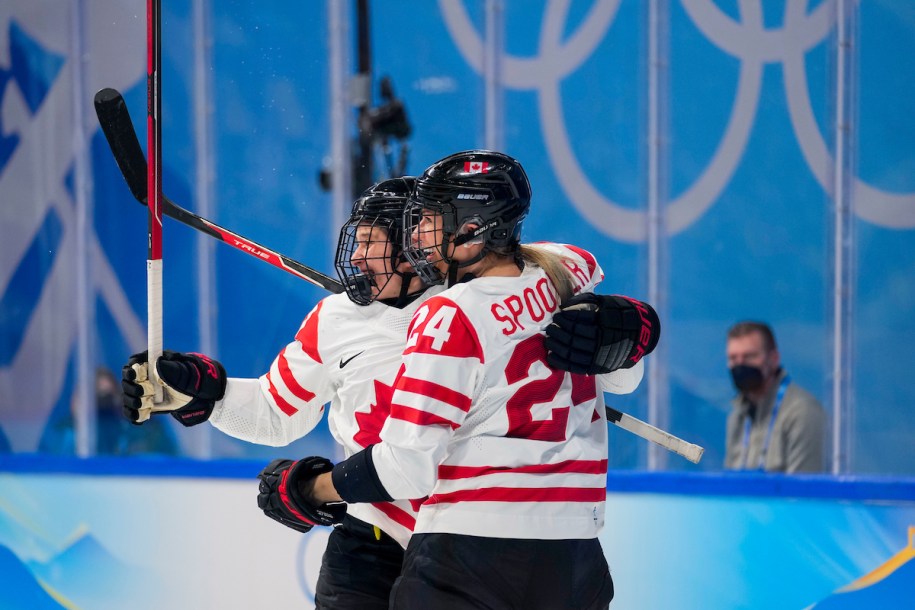 Brianne Jenner led the way with a pair of goals as Canada defeated the United States 4-2 on Tuesday at Wukesong Sports Centre in Beijing. Marie-Philip Poulin and Jamie Lee Rattray also scored while Ann-Renée Desbiens had a strong performance in net, making 51 stops in the win.

Both teams entered the final day of preliminary round action with 3-0 records. Canada, coming off a 6-1 victory over the ROC, had outscored opponents 29-3 at Beijing 2022 heading into this matchup. As expected, the United States gave the Canadians their first major test of the tournament.

The Americans got off to a quick start, outshooting Canada 12-2 at the first TV timeout. Desbiens came up huge on a few occasions, which included stopping Abby Roque in close. Shortly after, Canada turned the puck over and Abbey Murphy went in alone only to fire her backhand shot off the post.

Canada slowed down the United States’ momentum with a power play goal at 14:10. Poulin fired a pass to Sarah Fillier below the goal line. Fillier then fired a quick pass to Jenner in front who beat American goaltender Maddie Rooney upstairs to open the scoring.

After applying some more offensive zone pressure, the Americans tied the game at 9:17 of the second period. Dani Cameranesi accepted a pass from the behind the net but had her original chance stopped by Desbiens. Cameranesi stayed with the play and put in her own rebound to make it a 1-1 game.

The United States took a 2-1 lead at 11:34. On a power play, Amanda Kessel found Alex Carpenter who fired a backhand shot up and over Desbiens.

Canada responded quickly to Carpenter’s goal. Just 26 seconds later, Sarah Nurse found Jenner in the slot who netted her second of the game to make it 2-2.

Rattray put Canada back in front at 14:25. Natalie Spooner came out from behind the net and centered the puck through the crease. Rattray was parked in front and poked the puck past an outstretched Rooney, giving the Canadians a 3-2 advantage.

Poulin was sprung on a shorthanded breakaway late in the period and was awarded a penalty shot after being hooked up. On her free attempt, Poulin beat Rooney with a low shot over the netminder’s pad to extend Canada’s lead to 4-2 after two periods.

The pace slowed down in the third period as the Canadians worked to secure their lead. The United States went to the power play at 10:00 after Rebecca Johnston was called for unsportsmanlike conduct. The Americans applied lots of pressure in the offensive zone but were not able to score.

The United States went back to the power play with 2:37 remaining. The Americans pulled Rooney to create a six-on-four advantage but once again could not score, finishing 1/7 on the power play.

The victory gives Canada a 4-0 record in preliminary round play, securing the top spot in Group A. They’ll play the third seed from Group B in the quarterfinals.