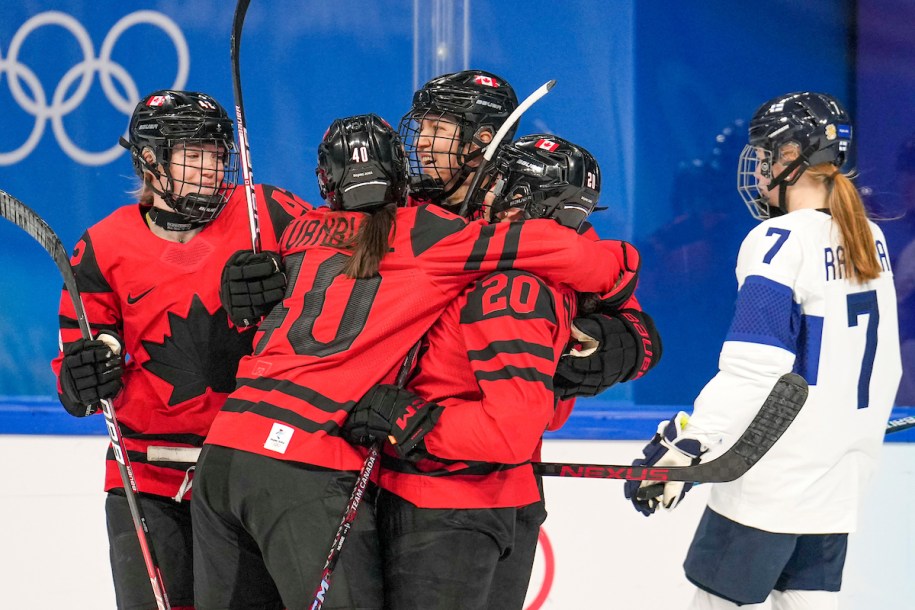 Team Canada had another offensive outburst in their second game of the women’s hockey preliminary round of Beijing 2022.

Hat tricks came from Sarah Nurse and Brianne Jenner while Sarah Fillier and Laura Stacey each netted a pair. Jamie Lee Rattray added a single. Fillier now has four goals and five points in her first two Olympic Games while veteran Natalie Spooner, who had four assists in this game, now has nine points.

Ann-Renée Desbiens, who also backstopped Canada in their win over Switzerland, made 28 saves in the victory.

Like in the tournament opener, Fillier opened the scoring with a goal just over a minute in, firing a hard wrist shot over the glove of Finland netminder Meeri Raisanen. Then at 12:45 of the opening frame, Finland turned the puck over to Nurse who beat Raisanen with a shot from inside the circle.

Finland got on the board at 18:27 of the first. Minnamari Tuominen had the puck at the blue line and fired a shot through a screen and over the blocker Desbiens. That made it a 2-1 game through 20 minutes.

Filler netted her second of the game at 3:22 of the middle frame. After a pass went off a skate, Fillier grabbed the loose pick and beat Raisanen upstairs with a backhand shot.

Nurse finished off a nice passing play with linemates Spooner and Rattray at 10:01 to make it a 4-1 game. Just 1:19 later, Jenner scored her first of back-to-back goals with a shot that went off Raisanen’s glove and in. Jenner scored again at 14:27, this time throwing the puck towards the goal only to have it go off a Finnish defender’s leg and in.

Stacey rounded out the second period scoring, firing a pass in front that went off a skate and in to give Canada a commanding 7-1 lead after two.

Rattray got Canada on the board in the third by firing a perfectly placed backhand shot over the glove of Finnish netminder Anni Keisala, who replaced Raisanen to start the period. Rattray was making the most of her opportunity to replace Mélodie Daoust on the team’s second line. Daoust, the MVP of last year’s IIHF Women’s World Championship, was injured in the tournament opener and Hockey Canada has listed her as day-to-day with an upper body injury.

Nurse completed her hat trick at 13:07. The two-time Olympian had a wide open net to score after Erin Ambrose found her with a cross ice pass.

The goals started to come quickly for Canada late in the third. Stacey netted her second at 14:10, firing a one-timer from the circle, and then Jenner completed her hat trick at 14:45 to make it an 11-1 final.

The Canadian women return to action on Sunday when they take on the Russian Olympic Committee and close out the preliminary round on Monday against rival United States.