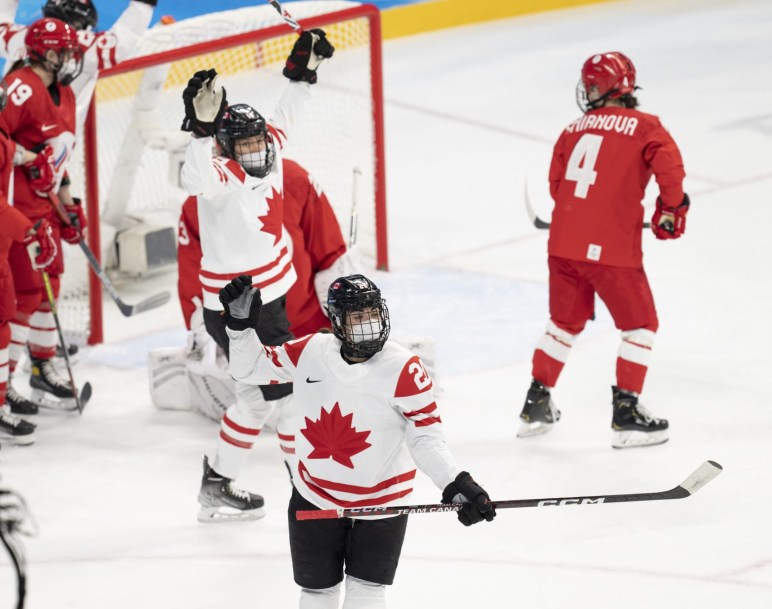 It was worth the wait for Team Canada.

Following a 75-minute delay to start the game, Canada improved to 3-0 in the women’s hockey preliminary round of Beijing 2022 with a 6-1 victory over the Russian Olympic Committee. The delay was reportedly due to an issue with ROC’s COVID-19 test results. Canada wore KN95 masks for the entirety of the game while ROC did the same for the first two periods.

The unusual start didn’t seem to faze the Canadians who scored twice less than 10 minutes into the contest at Wukesong Sports Centre. Sarah Nurse, Sarah Fillier, Jamie Lee Rattray, Erin Ambrose, Rebecca Johnston and Marie-Philip Poulin all scored in the win. Canada controlled most of the game, outshooting ROC 49-12.

After three games in Beijing, Canada has outscored opponents 29-3. They’ll look to keep the positive momentum going when they face their biggest rival, the undefeated Americans, on Monday at 11:10 p.m. EST. It will be the final game of the preliminary round for both squads.

Canada once again got off to a quick start, opening the scoring just 2:09 in. An ROC pass from behind the goal line was picked off by Nurse who quickly fired a shot past 17-year-old netminder Daria Gredzen. A few minutes later at 7:16, Canada took a 2-0 lead when Fillier tried to find Jocelyne Larocque only to have the pass go off an ROC skate and in.

Canadian goaltender Emerance Maschmeyer had to be sharp later on in the period, stopping Valeria Pavlova’s backhand shot on a breakaway attempt. Maschmeyer made 11 stops in her first start of the Olympic Games.

A power play goal from Rattray at 7:45 of the second period gave Canada a 3-0 lead. Gredzen stopped the original Natalie Spooner attempt but Rattray swept in the rebound to extend Canada’s advantage.

Ambrose made it 4-0 at 10:29 when her point shot went through some traffic in front of the goal and in. Not long after, Gredzen was replaced by Maria Sorokina in the ROC net.

ROC got on the board at 17:21. Anna Shokhina carried the puck in on an odd-man rush and fired a shot that beat Maschmeyer under the arm.

Just 39 seconds into the third and Canada on a power play, Johnston slid the puck five-hole on Sorokina to make it 5-1 Canada.

Poulin scored her first goal of Beijing 2022 at 5:50. The Canadian captain had a wide open net to score on thanks to a great cross ice feed from Brianne Jenner. It looked as though Canada had scored again at 11:31, this time from Fillier on a power play, but the goal was called back after an offside review.