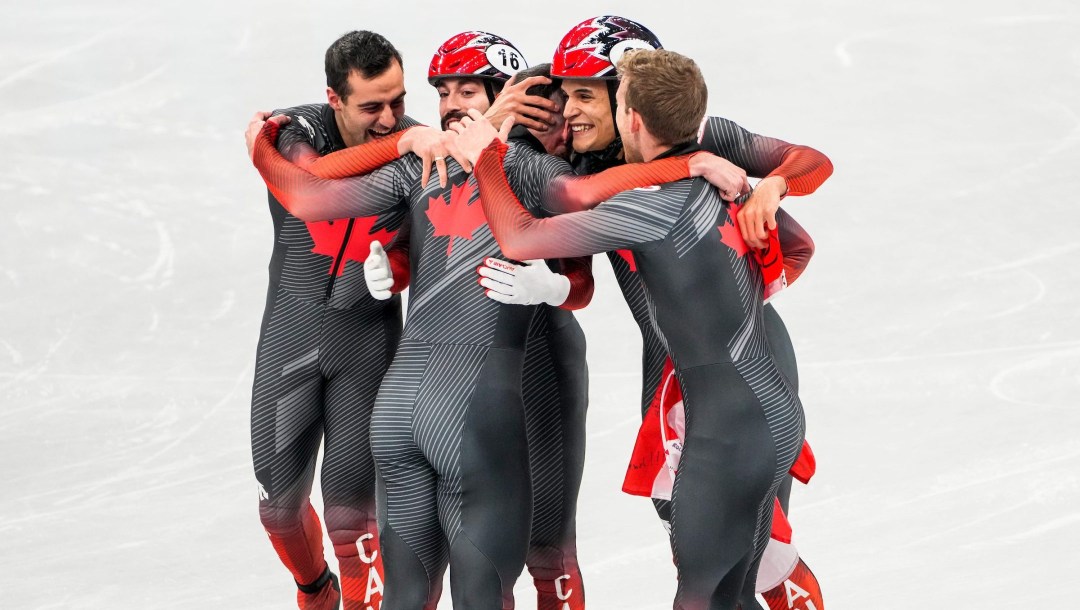 It was a race executed to perfection as the Canadian men’s 5000m relay team won Olympic gold medal at Beijing 2022, allowing Charles Hamelin to join Canadian Olympic royalty in his final race over the five rings.

Competing with Steven Dubois, Pascal Dion, Jordan Pierre-Gilles, and Maxime Laoun on the final day of short track speed skating, Hamelin may be joining some of Canada’s most decorated athletes, but to win the historic medal with this group of athletes, is something special.

“Finishing on top of the podium with these guys, it is living your dream,” said Hamelin after earning the sixth Olympic medal of his career. “These guys worked so hard every single day with me and that’s exactly the reason why we are here. We worked so hard for so long, and it just came easy at the end. In the final we just knew what to do, and we executed perfectly. For us it was a done deal with like 15 laps to go. We knew we were going to win.”

“It’s amazing, a dream come true,” added Pierre-Gilles. “I love these guys on and off the ice. It’s crazy good, we are a special team. We showed the world in the special year, we are dominant. We wanted so bad to show we are the best.”

The 5000m men’s relay final on Day 12 represented Hamelin’s final Olympic race and the mark that he will leave with the next wave of Canadian talent will be unmatched. His teammates wanted to get him on the podium, and together, they were ready to put on a performance to inspire athletes across the world.

“Charles means a lot to all the Canadian skaters,” said Dion. “He’s such an example, he’s worked so hard throughout his career, that’s why at 37-years-old, he’s still here, still so strong. He won a medal, he skated very well, and for all the skaters in the world, he’s such a great example of perseverance, he loves what he does, and that’s what makes him a champion.”

Dubois continued, “Charles has always been very welcoming to the new skaters. He made me feel like family and most importantly, he showed me how to work at training, even if you’ve achieved great things, to not settle and think that you’ve done it all. He’s a great example, great friend, and I’m very happy and proud I can say I won his last gold medal with him at these Olympics.”

Hitting the ice at Capital Indoor Stadium for one final Olympic race, the plan was executed flawlessly in the final. Conserving energy during the first half of the race, the Canadians stayed closely in third place, waiting for their opportunity. When a window opened, the Canadians broke free from the rest of the competitors, charging to the front of the group and never looked back.

The complete team effort ultimately led to Dubois racing down a clear path towards the finish line, stopping the clock at 6:41.257. South Korea (silver) and Italy (bronze) round out the podium.

Anchoring the Canadians over the final two laps of the race, Dubois saw the opportunity to solidify Canada’s win and capitalized. The gold medal now gives him the complete set, adding to his 1500m silver and 500m bronze at the Beijing 2022 Olympic Winter Games.

“It means so much,” said Dubois. “We had such a crazy season, and we wanted to show so bad what we could do. I saw on the last two exchanges that there were some small gaps and thought, ‘This is it’. We wanted to show how dominant we were in the relay and it meant so much for us to win this race. We’re just proud and grateful to have the chance to be at the Games, living this relay with our team, against these great teams around us, so it’s just an amazing moment.”

As short track speed skating wraps up at these Olympic Games, Hamelin has one more competition on his mind before calling it a career. Montreal will host the world championships in March. But for now, they will celebrate their gold medal achievement together.

“Winning with these guys is pretty awesome,” said Hamelin, ranking this experience near the top of his Olympic memories along with his Vancouver 2010 relay gold he won with his brother, François.

“I [have] passed so much time with them, on the ice and off the ice. They’re like family.”