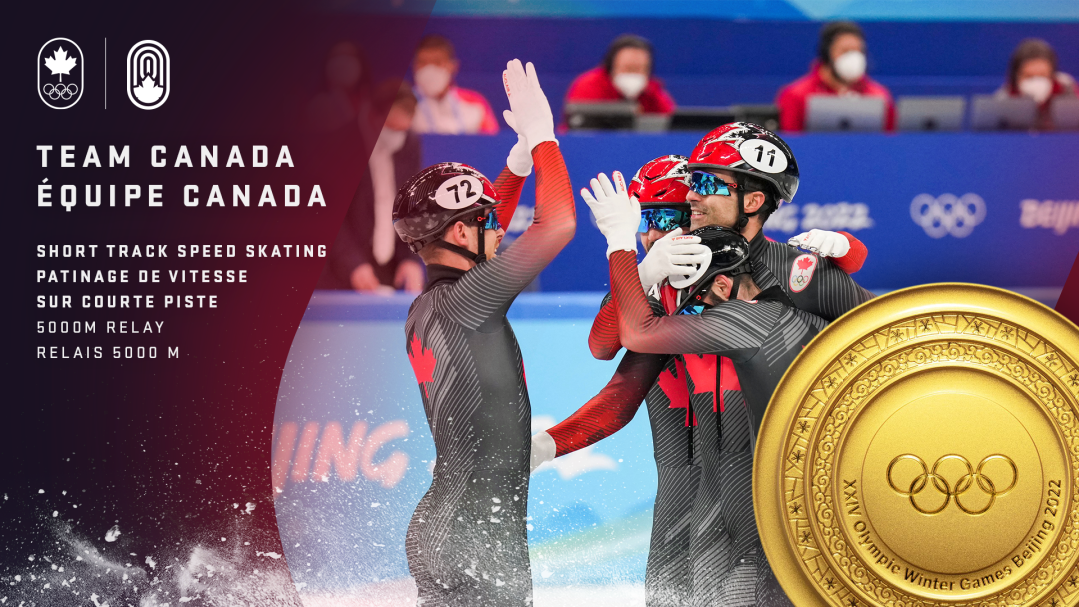 In the last Olympic race of his illustrious career, Charles Hamelin teamed with Steven Dubois, Pascal Dion and Jordan Pierre-Gilles for the top of the podium finish. Maxime Laoun will also receive a medal after racing in the semifinals, where the team won their heat to advance into the A final.

In the final, the Canadians executed their race strategy to perfection. They settled into third place for the first half of the 45-lap race, content to draft behind the leading South Koreans and save their energy. With 20 laps to go, a pass was made to get into second. On the exchange two laps later, they burst to the front and soon picked up the pace of the race. The Koreans were the only ones able to stay close to the speedy Canadians, but by the time Dubois took over for the last two laps, there was little doubt the gold medal would be theirs. Italy beat out the ROC for bronze in a photo finish.

For Hamelin, the gold medal has many historical implication. It is the sixth Olympic medal of his career, tying him with long track speed skater Cindy Klassen as Canada’s most decorated Winter Olympian. He is also tied with sprinter Andre De Grasse as Canada’s most decorated male Olympian, one behind swimmer Penny Oleksiak for the all-time lead, a record she set this past summer at Tokyo 2020.

His four Olympic gold medals tie him with hockey players Jayna Hefford, Hayley Wickenheiser, and Caroline Ouellette for the most ever by a Canadian athlete. This is the fourth Olympic relay medal Hamelin has won. He was a silver medallist in his Olympic debut at Turin 2006 before winning gold at Vancouver 2010. He was part of the bronze medal-winning team at PyeongChang 2018. Individually, he won 500m gold in Vancouver and 1500m gold at Sochi 2014.

For Dubois, who had already won silver in the 1500m and bronze in the 500m, it is his third medal of Beijing 2022 as he completes the full set. Dion adds to the bronze he won in the 5000m relay four years ago at PyeongChang 2018. Pierre-Gilles and Laoun will stand on an Olympic podium for the first time.

This is the seventh Olympic medal Canada has won in the men’s 5000m relay since it was added to the Olympic program at Albertville 1992. Canada only missed the podium at Lillehammer 1994 and Sochi 2014 and has more medals in the event than any other country. It is the fourth time Canada has won gold in the relay, winning back to back at Nagano 1998 and Salt Lake City 2002 before the victory on home ice at Vancouver 2010.