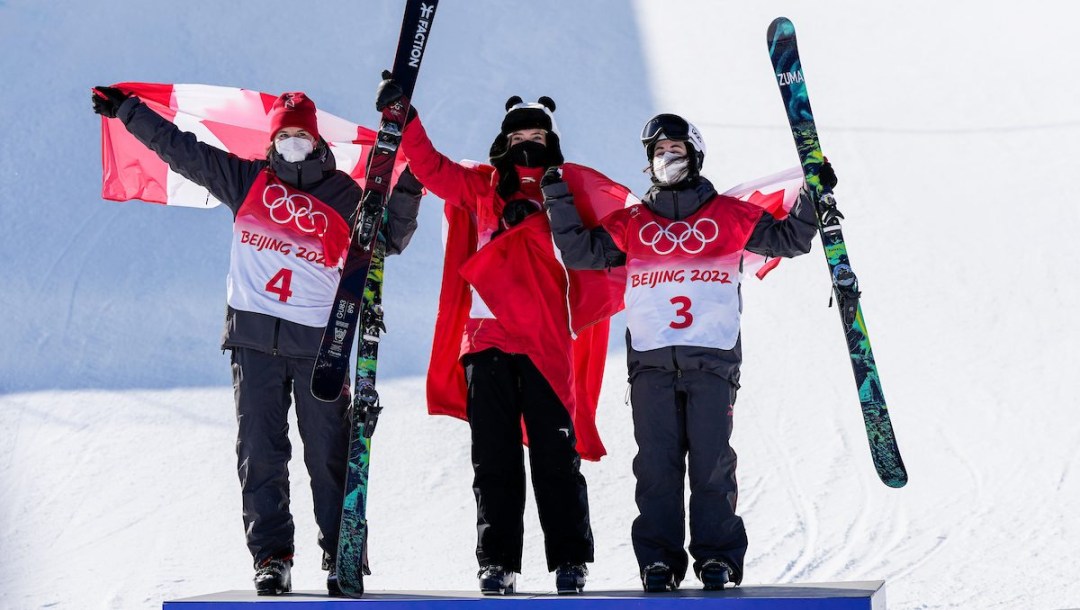 As Rachael Karker and Cassie Sharpe shared a celebratory hug towards the end of the women’s ski halfpipe final, six words could be heard loud and clear:

“We’re on the Olympic podium together!”

Sharpe, who won gold in the event at PyeongChang 2018, took silver in Beijing, while Olympic newcomer Karker won bronze. It was an Olympic dream for the Canadian teammates after years spent training together and pushing one another to new competitive heights.

“It was amazing,” said Karker. “Cassie and I have shared so many podiums over the years and I’m so happy we were also able to get this one.”

The jubilation at Genting Snow Park was a far cry from the situation a year ago, when Sharpe was undergoing reconstructive knee surgery (during which her femur was fractured) after a nasty crash. Back then, it was unclear whether she could make it to Beijing, never mind get back on the podium.

She couldn’t get back onto snow until late 2021 and was still testing her physical capabilities in the weeks leading up to the Beijing Games. The night before the final, Sharpe wrote a note to her future self: “no matter what happens today, I’m proud of myself.”

“It feels surreal at this point. I can’t even put it into words,” she said. “I’ve been through hell and back the last year, so I’m just so grateful that all the pieces that I’ve worked so hard on came together today.”

While Sharpe was claiming Olympic gold in 2018, Karker was still emerging on the scene. She had her first career World Cup podium that year, and just missed the podium in halfpipe at the 2019 FIS World Championships.

But she would continue collecting podium finishes on the World Cup circuit and at the X Games, including a halfpipe silver at the 2021 FIS World Championships. Now, there’s an Olympic podium to add to her list of accomplishments.

“I’m very happy; I was hoping to come out with a medal and I just hoped I’d make Canada proud and happy to be here,” said Karker.

“We were just so happy to share this, and it was always a dream for it to be both of us, and we did. So we are just overwhelmed with emotions, just super happy with each other.”

And while Sharpe and Karker were thrilled to share the podium with one another, they were similarly excited to share it with the utterly unstoppable Eileen Gu, who will finish these Games with two golds and a silver.

“She’s definitely one of the top girls of our sport and she pushes all of us to be better,” said Karker of the 18-year-old who represents China. “I’m super happy to have her in the sport with us.”

Sharpe was even more direct with her praise for Gu: “She is a machine.

“She’s extremely talented. I’m so proud of her, can’t wait to see what she continues to do and she’s gonna take halfpipe skiing so far.”

But while athletes like Gu represent the future of women’s freeskiing, Sharpe and Karker were both sure to also pay tribute to one of the sport’s iconic pioneers: Sarah Burke.

The Canadian trailblazer, who passed away in 2012, was one of the driving forces behind getting women’s freeskiing on the Olympic program, which happened at Sochi 2014.

“Every day when we go to the wax cabin we’ve got a Canada flag on our door, we’ve got Sarah’s name across that flag,” said Sharpe. “She’s definitely here with us and is the reason we are here.

“It’s an honour to be on the podium and representing what she believed in.”

Karker, who said Burke was “an icon in Canadian for halfpipe skiing”, is proud to be part of carrying that legacy forward.

“I’m definitely excited to keep going and to build on this and hopefully to get to another Games at some point.”