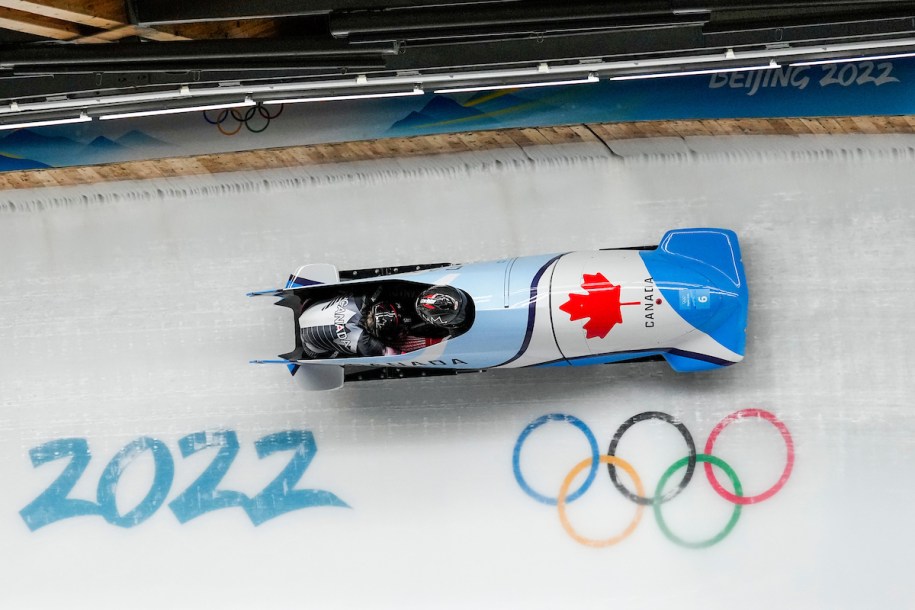 After the first two heats of the two-woman bobsleigh competition, Team Canada’s Christine de Bruin has a shot at a second medal at Beijing 2022.

De Bruin, who has already won bronze in the women’s monobob event, and brakewoman Kristen Bujnowski are just 0.42 out of medal contention heading into the final two heats. The Canadians trail American pilot Elana Meyers Taylor, who sits in third with a time of 2:02.79.

De Bruin, who finished seventh in the two-woman event during her Olympic debut at PyeongChang 2018, feels she’s made key mental adjustments in Beijing to improve her driving.

“I started putting a lot of pressure on myself in training, just to be perfect,” de Bruin said. “And I kind of let that mess me up. I was like, I need to go back to what I was doing in monobob. Be kind to myself and just do the lines I know how to do and don’t make it perfect. Just drive like I know how to drive.”

The Canadian sled sat in fifth position after the first heat. Despite a slower start in heat two, de Bruin and Bujnowski had a cleaner run and were able to slide into fourth after a rough second run by American Kaillie Humphries, who moved down into fifth.

Canada’s Cynthia Appiah and brakewoman Dawn Richardson Wilson currently sit in eighth position after two heats with a time of 2:03.64. Appiah, like de Bruin, competed in the monobob event but finished off the podium in eighth.

“Today’s been very good,” Appiah said. “It’s a marked improvement from the monobob. I was just telling myself to have fun and I was getting the training runs that I expected of myself. I just tried to manifest that in the race today.

“I don’t think there’s much to improve on. We’ve been nailing the starts, which has always been a strong suit of ours. It’s just a matter of putting two more consistent runs like I did today.”

The third Canadian sled in the two-woman event, piloted by Melissa Lotholz with brakewoman Sara Villani, sits in 16th with a time of 2:04.21.

The final two heats of the event will take place Saturday morning beginning at 7 a.m. ET.