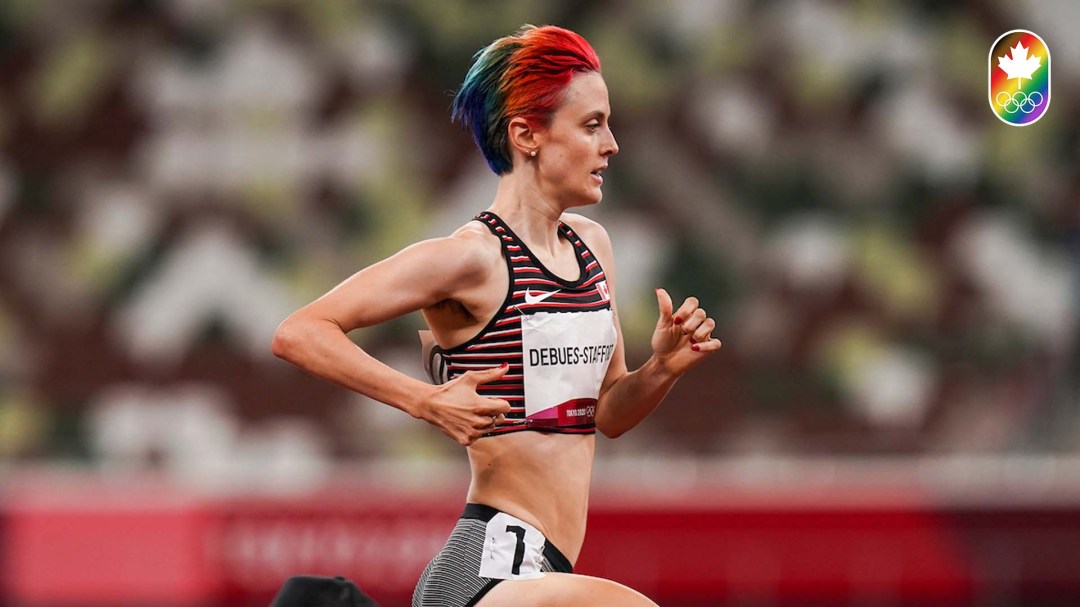 June is Pride Month. It is a time to recognize the impact that 2SLGBTQI+ folks have had on equality and civil rights locally, nationally, and globally. This month aims to increase understanding of and reduce violence towards 2SLGBTQI+ people.

The acronym 2SLGBTQI+ (also seen as LGBTQI2S+) is used to reference all people with diverse gender identities and experiences of attraction (sexual orientation), including those who identify as Two Spirit, lesbian, gay, bisexual, trans, intersex, queer or questioning. To learn more, please visit Egale Canada.

Let’s take a look at just some of the Team Canada athletes who proudly represent these communities by sharing their stories.

Competing for Team Canada at Tokyo 2020 and winning gold with the women’s soccer team, Quinn became the first openly transgender and non-binary athlete to win an Olympic medal. They had come out as trans through their social media almost a year before the Games took place. Quinn has continued to share about their journey and that of their teammates as they celebrated that great Olympic gold with the country.

Olympic bronze medallist and now-retired rugby star Ghislaine Landry came out in 2006 when she was 18. In 2018 she married the love of her life, Michaela, and in September 2021 they welcomed their baby girl into the world. After being honoured for her great career on the field with her family during a World Rugby Sevens Series match in Langford, B.C. earlier this spring, Landry reflected on the importance of visibility.

Before he made his Olympic debut at Rio 2016, Markus Thormeyer worried that coming out as gay to his training group might change the dynamics and compromise his and their chances of making it to the Olympics. But when hiding his sexuality from his team became a huge distraction and started to affect his relationships and training, he realized that something had to change.

After building up the courage to share his sexuality with his teammates — who proudly supported him — he felt like he could finally be comfortable in his own skin and show his true self. He told his story publicly in February 2020, just a few months after making an individual event final for the first time at the FINA World Championships.

Chances are if you follow two-time Olympic gold medallist Mélodie Daoust on Instagram you would know that her son Mathéo and her partner Hanna are her whole world. Whether they’re cheering her on from across the world or meeting her at the airport to check out her shiny new bling, this support system means everything.

Olympic medals aren’t the only shiny things these two have on their minds. Team Canada Olympians Stephanie Labbé and Georgia Simmerling announced their engagement in August 2021 after four years of dating. They have been through a lot together — the highest of highs and the lowest of lows — but they are always there for each other. One of the most important things in their relationship is the acceptance they give one another to just be themselves.

About a year ago, three-time Olympian Paul Poirier shared that he wasn’t always comfortable and confident in his skin. He said he treated his sexual orientation as “a flaw that had to be compensated for”. Putting pressure on himself to appeal to every person he came in contact with, he started to lose who he was as a person. But in the absence of a heavy competition schedule because of the pandemic, he had the time to reflect on his personal life experiences and the importance of just being himself.

You might remember Gabriela DeBues-Stafford and the iconic rainbow hair she sported at Tokyo 2020. The two-time Olympian posts a lot of photos of her and husband Rowan on her Instagram, which may lead to assumptions about her sexual orientation. DeBues-Stafford proudly identifies as bisexual and queer.

Several years ago, she had anxiety that the gender of her eventual life partner would be her deciding whether she was gay or straight, but she ended up finding someone who fully accepted every part of her. In an Instagram post she wrote “if you’re bisexual, pansexual, queer: you are valid. You have nothing to be ashamed of, and you deserve people who love and respect you and your queerness.”

It wasn’t until after she left the competitive world behind that two-time Olympian Kaitlyn Weaver felt comfortable with sharing her sexual orientation. Feeling stereotyped as a figure skater, she suppressed her true self which took a huge toll on her mental health. In 2021 she announced through her social media that she identifies as a queer woman. Since then she has been working hard to pave the way for queer-identifying people in the sport of figure skating.

Annie Guglia took advantage of Pride month to reaffirm the importance of taking action to help include people from 2SLGBTQI+ communities and fight prejudice throughout the year. The skateboarding athlete who competed at Tokyo 2020 is happy to be able to openly be herself and live out her passion for skateboarding in an environment that embraces diversity.

She takes advantage of her social media platforms to give advice to those who want to be allies — write their pronoun in their bio, do not assume that everyone is straight, cisgender or binary, educate themselves on diversity of gender, help people from 2SLGBTQI+ communities to change laws that are harmful to them.

The word pride holds special significance for Emily Clark. A little over a year before Beijing 2022, she had chosen this word to guide her in what she brings to the world everyday. This year, the Beijing gold medalist is proud of where she comes from, the player she is on the ice and the person she is outside of sport. She has grown to be proud and true to every part of herself.