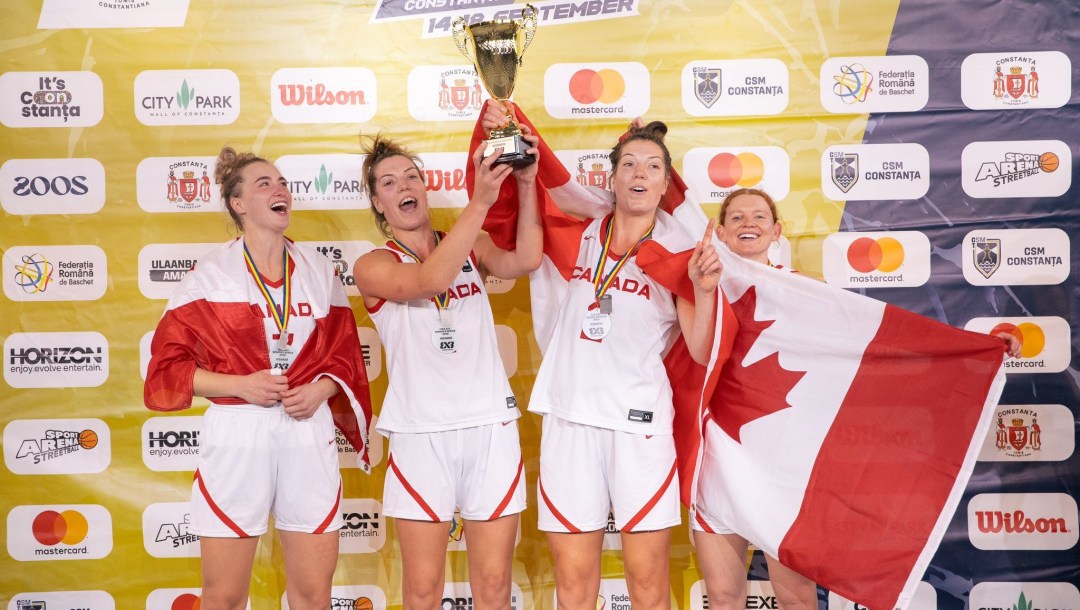 It was a wonderful weekend for Team Canada in several sports.

The women’s 3×3 basketball team capped off a dominant season by winning their series finale. Meanwhile, the men’s tennis team pulled off the improbable to clinch a spot in the knockout stage of the Davis Cup Finals.

Get all the details on the weekend that was:

Canada’s women’s 3×3 squad had another dominant performance, this time at the FIBA 3×3 Women’s Series Final in Constanta, Romania. They took the title with a perfect 5-0 record, culminating in a 21-16 win in the final against France.

The team of Katherine Plouffe, Michelle Plouffe, Paige Crozon, and Kacie Bosch had an incredible season on the 3×3 circuit. They finished with a remarkable 28-3 record for a winning percentage that nearly eclipsed 90 per cent. Their title in Constanta was their fourth in a season that only featured eleven stops. No other team won more than two events.

Michelle Plouffe was named MVP of the final. The 30-year-old dominated nearly every stat category throughout the tournament and put up 14 of Canada’s 21 points in the final.

Canada had opened the group stage of the Finals with a 2-1 victory over South Korea. Vasek Pospisil kicked it off with a three-set singles win over Hong Seong Chan, 4-6, 6-1, 7-6(5). After Auger-Aliassime lost in straight sets to Kwon Soonwoo, he teamed with Pospisil to get the needed win in doubles, 7-5, 5-7, 6-3.

Next up was Spain, who boasted World No. 1 Carlos Alcaraz and were playing in front of the home crowd in Valencia. The pressure was on Auger-Aliassime after Pospisil dropped the first singles match to Roberto Bautista Agut. But Auger-Aliassime added himself to the very short list of Canadians to defeat a World No. 1 when he defeated Alcaraz in three sets, 6-7(3), 6-4, 6-2. Canada clinched the tie when Pospisil and Auger-Aliassime won the doubles match against Marcel Granollers and Pedro Martinez 4-6, 6-4, 7-5.

In Chennai, India, Gabriela Dabrowski won her second WTA doubles title of the year. This time she was alongside Brazil’s Luisa Stefani and the pair had absolutely no problems living up to their No. 1 seeding.

They didn’t drop a set en route to the title, capped with a win over Georgia’s Anna Blinkova and Natela Dzalamidze, 6-1, 6-2.

Fellow Canadian Eugenie Bouchard advanced to the semifinal round of the women’s doubles alongside Belgium’s Yanina Wickmayer. But they retired in the second set against the eventual runners-up. Bouchard also made it to the quarterfinals in singles, her best result in over a year.

Linda Morais (68kg) and Karla Godinez Gonzalez (55kg) both won bronze medals in their respective weight classes at the World Wrestling Championships in Belgrade, Serbia. Morais, a former world champion at 59kg, is taking on the challenge of the new weight class ahead of Paris 2024.

Two other Canadian women made it to bronze medal bouts. Justina Di Stasio (76kg) and Ana Godinez Gonzalez (62kg) both finished tied for fifth in their events. The top Canadian man at the worlds was Amar Dhesi (125kg) who also finished fifth in his weight class.

Kelsey Lalor has dreamed of wearing the maple leaf on her chest for as long as she can remember. Watching...