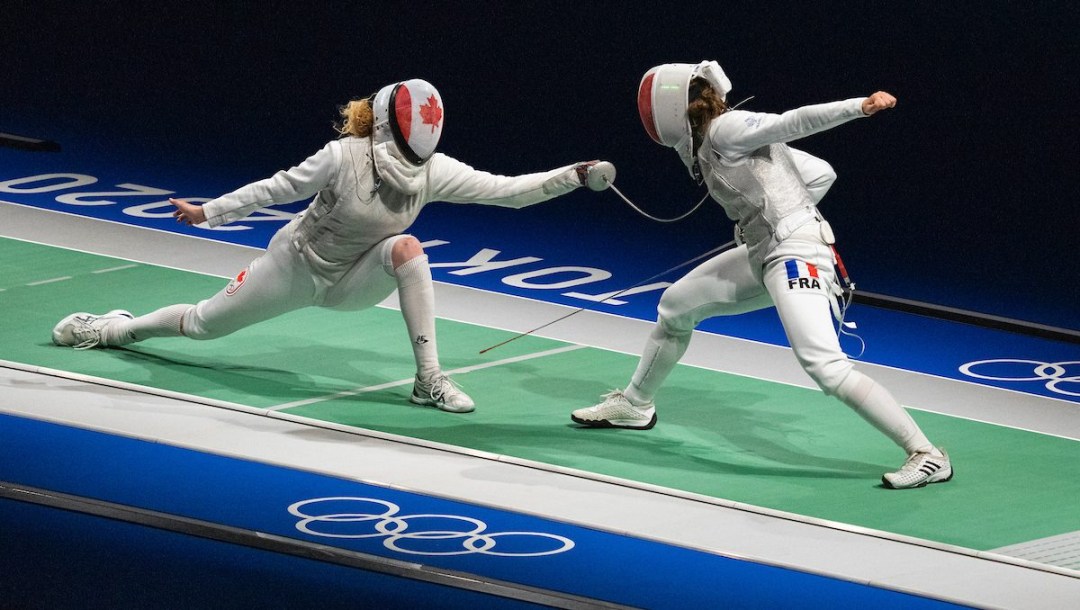 “Now I can dedicate myself fully to becoming the best fencer that I can be.”

That is what winning a Murphy Family Award means to Eleanor Harvey, Canada’s top fencer and the number three ranked fencer in the world. This year alone, she has won a gold medal at the Zone Championships in Paraguay, a silver medal at the Fencing Grand Prix in Korea, and a silver at the World Cup in Poland where she was the first Canadian to make a World Cup final in women’s foil.

“Being a Murphy Family Award recipient means so much to me as someone who grew up not knowing how we would be able to afford the next tournament. My mom and grandma made so many sacrifices to support me chasing my dreams,” said Harvey. “Now I know that financially I will be in the position, as I try to qualify for the Paris 2024 Olympic Games, to do everything that I need to prepare.”

Created by Glenn and Stacey Murphy, the Murphy Family Awards give promising athletes and Olympic hopefuls the peace of mind to focus more fully on their training, a welcome reprieve from outside financial demands. Recipients are well-established in their sport with a high international ranking and a strong probability of representing Team Canada at an upcoming Olympic Games.

Preparing for the Olympic Games requires singular dedication, passion and resilience. Athletes must learn to balance intense training and competition schedules with outside interests and commitments. Fortunately, Team Canada athletes are up to the challenge.

Meet Rose Woo, an elite-level artistic gymnast and another recipient of a Murphy Family Award. She is a 13-time finalist at World Cup or Challenge Cup competitions and, at 22 years old, already a veteran of two Olympic Games.

Woo was a member of the Canadian team that placed ninth at the Rio 2016 Olympic Games and recovered from a left Achilles’ tendon tear in 2018 to earn the spot as traveling alternate on the Canadian team at last summer’s Tokyo Games.

Not one to rest on her heels, shortly after the Olympics, Woo placed 18th all-around at the World Championships in Kitakyushu, Japan, landing in her first world all-around final. Later that September, Rose and her sister Victoria (also a gymnast) launched Elegant Woo’s leotard company.

Woo considers the Murphy Family Award an integral part of her success. “I have had so many injuries throughout my career so to keep healthy and strong, I need to do physiotherapy, Pilates, strength and conditioning, etc. All my rehab is completely self-funded which has caused a great amount of anxiety,” she explained. “This award allowed me to reduce my stress levels and concentrate on what I have to do to recover faster and more efficiently,” she said. “The Murphy Family is definitely a part of my success.”

Both Harvey and Woo have their sights firmly set on the Paris 2024 Olympic Games and know the Murphy Family Award will help them get there.

The Canadian Olympic Foundation is proud to announce the 2022 recipients of the Murphy Family Awards:

Congratulations to the latest bursary recipients!

Thank you to the Murphy family for their investment in Team Canada. Their support of Canada’s top athletes and Olympic hopefuls offers the flexibility for athletes to invest in whatever resources are necessary to help them achieve peak form for the Olympic Games.

Support from donors plays a huge role in the success of Team Canada athletes. “The Murphy Family Award means so much to me,” said Woo. “I can’t express my gratitude enough for having received it.”

For more information about the Canadian Olympic Foundation and how you can support Team Canada, please visit olympicfoundation.ca.

Download the Team Canada app to track athlete’s journeys and results as they prepare for Paris 2024 and beyond.