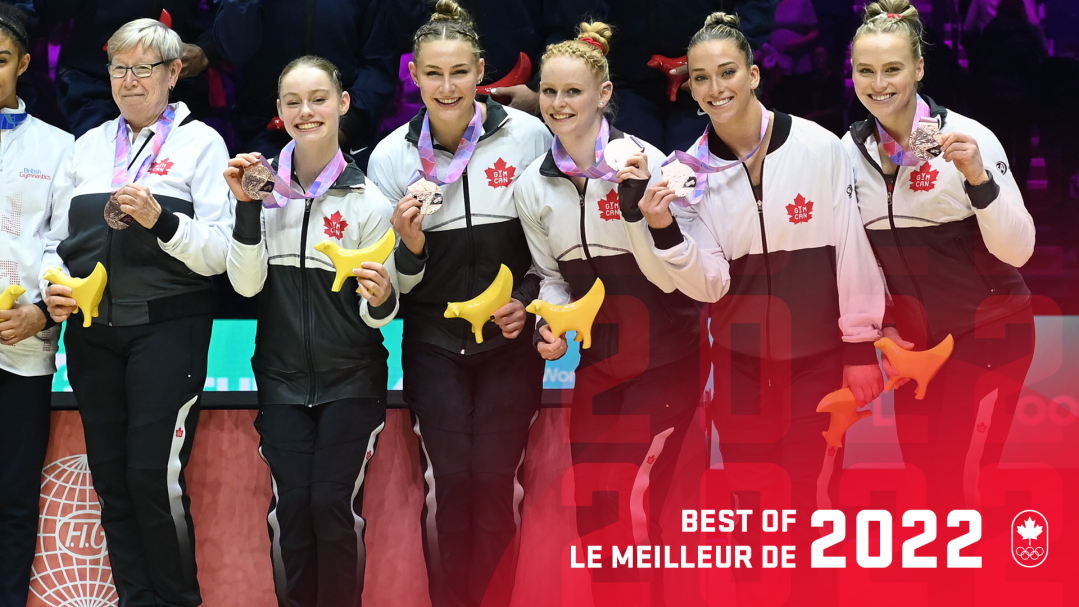 Over the last decade, Ellie Black has risen from being an off-the-radar Olympian at London 2012 to a globally-recognized and respected superstar.

At the same time, Canada has grown from being an afterthought in women’s artistic gymnastics to a country that is constantly pushing for the podium.

But it was still quite the surprise when Black and her teammates Laurie Denommée, Denelle Pedrick, Emma Spence, and Sydney Turner captured bronze at the 2022 FIG Artistic Gymnastics World Championships in Liverpool, England. Not only was it Canada’s first ever team medal at the artistic gymnastics worlds, it qualified Canada a full women’s team for Paris 2024.

So how did they make history? The Canadian way, of course – with solid, consistent routines and incredible camaraderie and support.

At 27, Black was the oldest competitor in the women’s team final. The importance of her veteran leadership cannot be understated as she was surrounded by four world championship débutantes.

Sadly absent from the squad was two-time Olympian Shallon Olsen, who had to withdraw just days before the start of competition following the sudden death of her mother. The steadiness usually provided by Olsen, a 2018 world medallist on vault, was sure to be missed.

Early on, it looked that way as Canada squeaked into the team final after placing eighth in qualification.

But then – according to those in the know – came one of the craziest team finals in history.

With Olympic team spots up for grabs for the first time this quadrennial, it was certainly a pressure-packed situation. Rotation after rotation, teams such as China, Italy, and Japan that were expected to be in the medal mix kept watching their gymnasts fall from apparatuses.

The Canadian team did not. In fact, they were the only team not to record a single fall throughout the final.

It was only fitting that the most successful artistic gymnast Canada has ever had got to close it out on her best apparatus. While Black was rocking her beam routine (and celebrating with perhaps the biggest lasso/fist pump ever seen in the sport), a Japanese gymnast came off the uneven bars, taking her team off the podium.

When the final scores were revealed, the screams from the Canadian contingent reverberated throughout the arena.

For all of her individual accomplishments (and there have been a lot of them), it was clear that for Black, this bronze medal meant everything.

“I was so proud and so blown away,” she said. “The team is my favourite and to be able to be up there on the podium with the team, it’s the best feeling.”

That was just the start of what were arguably Black’s personal best world championships.

She went on to finish in the top five of the individual all-around for the third time in her career at the worlds. She just missed the podium in the vault final, coming a mere 0.05 of a point shy of the bronze medal.

On the last day of competition, the spotlight was back on Black on the beam. It was the sixth straight time she had qualified for the eight-woman beam final at the world championships. She had finished fourth on the apparatus at Tokyo 2020 where she had aggravated an ankle injury that she still had to be mindful of in Liverpool.

Her routine wasn’t perfect, but it was just what she needed to earn her first world championship medal on an individual apparatus as she captured the silver.

There are many words and phrases that can be used to describe Black: loyal, humble, focused, team player, and hard worker are just some of them.

In the words of Olympic champion and CBC analyst Kyle Shewfelt: “Ellie is exactly the type of ambassador you want representing your country on the world stage.”

With longevity rarely seen in women’s artistic gymnastics, Black is still giving everything she has to further the development of the sport in Canada. The reaction of her teammates in Liverpool would be Exhibit A for how they feel about her efforts.