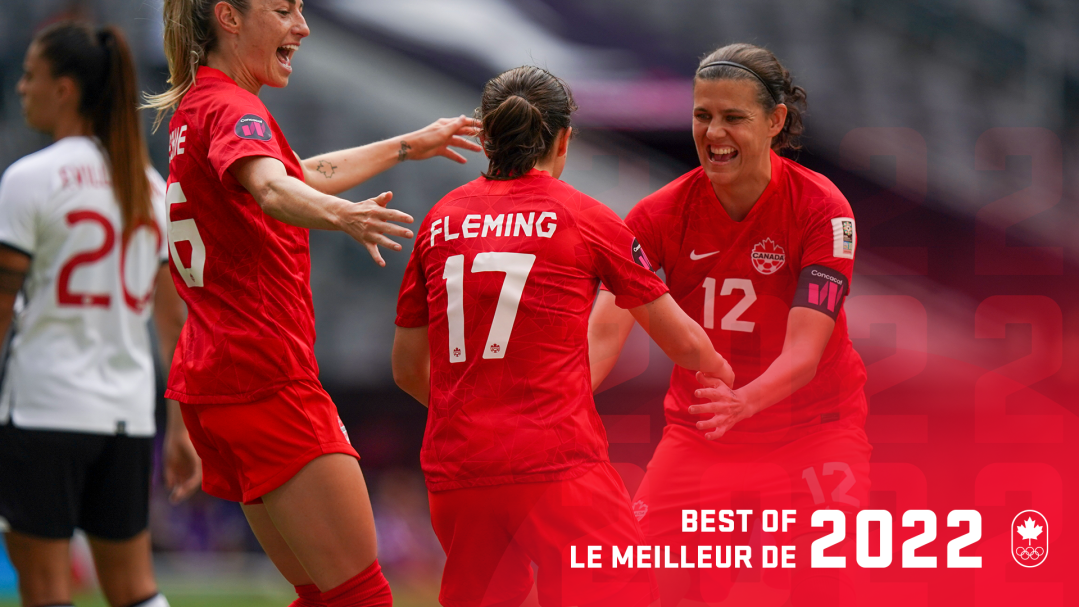 For both Canada’s men’s and women’s national soccer teams, the story of 2022 was FIFA World Cup qualification.

This was the first time both squads successfully qualified for their respective World Cups in the same calendar year. But if the last 12 months are any indication, it won’t be the last time.

The men’s team got things off to a flying start with three straight wins in World Cup qualifying. First, a 2-0 win in San Pedro Sula, Honduras (the site of much historic misery for the team) on January 27, followed by a 2-0 win over the United States in Hamilton, Ontario on January 30.

Another tidy 2-0 decision over El Salvador on February 2 kept Canada undefeated through 11 matches in the final round of qualifying. Head coach John Herdman’s side was on the cusp of Canada’s first berth in the men’s World Cup since 1986.

Later in February, the women’s national team saw their first action of 2022, in the inaugural Arnold Clark Cup. The team had a solid showing: a 1-1 draw against England, a 1-0 win over Germany, and a 1-0 loss to Spain.

By the time March rolled around, the men knew they just needed a win to clinch a spot at Qatar 2022. That fateful day came on March 27, a 4-0 triumph over Jamaica at Toronto’s BMO Field that sealed the team’s qualification.

One down, one to go.

The women looked to build momentum for their own summertime World Cup qualifying tournament with a trio of home friendlies. Head coach Bev Priestman’s side went undefeated: 2-0 vs. Nigeria in Vancouver and 2-2 vs. Nigeria on Vancouver Island in April, and 0-0 vs. South Korea in Toronto in June.

Then, the main event: the CONCACAF W Championship. It was the regional tournament to determine who would reach the 2023 FIFA Women’s World Cup and the women’s Olympic tournament at Paris 2024.

Canada went three-for-three in the group stage, defeating Trinidad & Tobago, Panama and Costa Rica, to clinch a spot at Australia-New Zealand 2023. A semifinal win over Jamaica set the stage for a showdown with the United States, with one Olympic berth up for grabs.

In a hard-fought final on July 18, Canada came up just short in a 1-0 loss. But the team can still earn the chance to defend their gold medal, via an Olympic play-in against Jamaica in September 2023.

READ: How John Herdman defined a decade in Canadian soccer

Next up, the men played a series of friendlies in September and November as World Cup preparation. It was a mixed bag of results: wins over Qatar and Japan, a loss to Uruguay, a draw with Bahrain.

Most notable may have been 20-year-old Ismaël Koné scoring his first national team goal, against Bahrain. It helped secure him a World Cup roster spot that no one could have seen coming at the start of 2022.

The women were getting their own business done in the autumn, with five wins in six friendlies between September and November. But even more importantly, they learned their fate for next year’s World Cup.

The World Cup draw on October 22 saw Canada placed in Group B alongside Nigeria, Ireland and the co-hosts, Australia. It’s a challenging group for what would be captain Christine Sinclair‘s sixth (and perhaps last) World Cup.

But of course, Sinclair has never been afraid of a challenge… more on that in a moment.

First, a word about another Canadian captain who finally got his own World Cup moment. After 20 years with the national team, Atiba Hutchinson led Canada out against Belgium on November 23.

The Canadians impressed observers worldwide with their performance against the world’s No. 2 side, losing 1-0. Four days later, Alphonso Davies scored Canada’s first-ever goal at the men’s World Cup, which would prove to be the tournament highlight.

A 4-1 loss to Croatia and a 2-1 loss to Morocco closed out the adventure in Qatar. But the experience came with plenty of “learnings” (as Herdman would call them) for Canada’s co-hosting of the tournament in 2026.

The year closed off with some more exciting news for the future. Sinclair and former teammate Diana Matheson announced their involvement in a new Canadian women’s professional league, set to kick off in 2025.

Matheson is currently pursuing an Executive MBA at the Smith School of Business, driven by a desire to help establish a league like this one.

So while World Cup qualification may have been the immediate big story in 2022, it was also about planting seeds for the years to come.