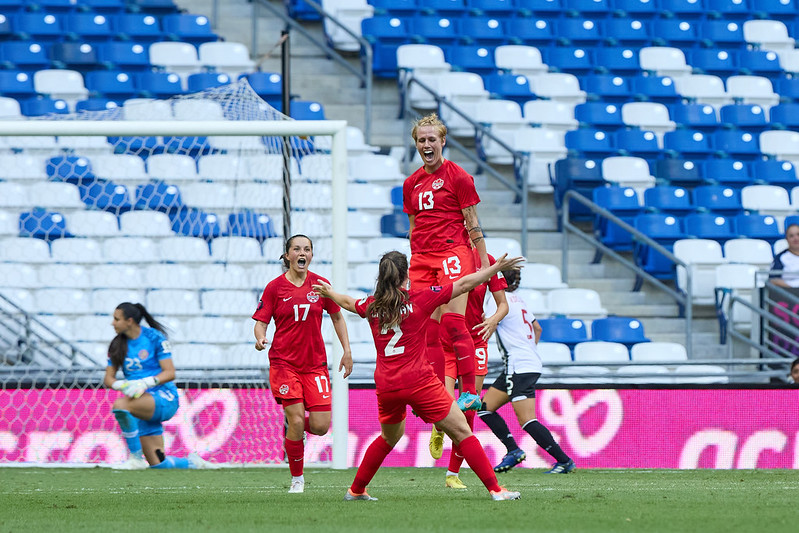 Canada’s quest to repeat as Olympic champions in women’s soccer is underway at the Concacaf W Championship in Monterrey, Mexico.

The eight-team tournament will determine which teams from the Concacaf region (North and Central America, and the Caribbean) qualify for both the 2023 FIFA Women’s World Cup and the women’s soccer competition at Paris 2024.

Canada faces Trinidad & Tobago (July 5, 6-0 win), Panama (July 8, 1-0 win) and Costa Rica (July 11, 2-0 win) in group stage play. The other group features the USA, Mexico, Jamaica and Haiti. The top two teams from each group earn automatic spots in next year’s 32-team Women’s World Cup, while the third-place finishers will also have a shot via the intercontinental playoffs.

Qualifying for the 12-team Olympic competition is trickier: only the winner of the W Championship secures a spot. The runner-up and third-place team will meet in September 2023 to determine the region’s other Olympic participant.

Canada got off to a perfect start and never looked back, en route to a victory that secured first place in Group B.

The reigning Olympic champs opened the scoring in the 5th minute. Nichelle Prince’s precise pass put Jessie Fleming in behind the Costa Rica defence and the 24-year-old coolly finished for her 17th national team goal.

Prince nearly doubled the lead five minutes later, as some nice ball movement gave her a scoring chance from close range. But Costa Rica goalkeeper Daniela Solera stuck out her left foot and made an impressive save.

The Canadians looked sharp in attack for most of the first half, finding plenty of channels through the Costa Rican defenders. But the tempo slowed somewhat amid sweltering conditions, with the temperature feeling upwards of 43 C at field level.

“I don’t think we can underestimate what the heat does,” head coach Bev Priestman said after the game, acknowledging that it can lead to sloppy passes, particularly as the game goes on. “It was incredibly hot, you could probably see that in the players.”

The score held at 1-0 by halftime, with Canada ruing a number of missed scoring opportunities that could have padded their lead.

Canada was boosted by the halftime additions of Adriana Leon and Jordyn Huitema, but it was Costa Rica who were on the front foot to start the second half. The central defensive duo of Kadeisha Buchanan and Vanessa Gilles, however, had things well under control.

Yet it was another Canadian substitute—Sophie Schmidt, making her first appearance of the tournament—who would deliver the game’s next goal. The 34-year-old found the ball at her feet inside the Costa Rica penalty area and expertly curled it in off of the goal post in the 69th minute.

“I was over the moon for Sophie,” said Priestman, noting the hard work that the veteran puts in for the team on and off the field.

The insurance goal eased the pressure somewhat, and the Canadians spent much of the remaining time comfortably controlling the ball.

The team’s best chance of the late going came from Huitema, who found herself in on goal but couldn’t put her shot past Solera. Teammate Cloé Lacasse got to the rebound but put it off of the goal post.

“We knew we were going to rise to the challenge today,” said Priestman. “I was really pleased. Overall, I thought it was a professional performance. It wasn’t perfect, but it was professional.”

Canada will head into Thursday’s semifinal against Jamaica, who finished second in Group A with two wins and a loss. The other semifinal will see Costa Rica go against the USA, who won Group A with three wins.

With a hard-fought victory over Panama, Canada achieved one of its goals at this tournament: qualifying for next year’s FIFA Women’s World Cup.

It was a spirited, physical match, with Panama providing a much stiffer challenge than the Canadians faced in their tournament-opening encounter with Trinidad & Tobago.

Canada’s best chance in the early going came in the 19th minute, when Ashley Lawrence lofted in a perfectly weighted cross from the left side, and Adriana Leon headed just over the crossbar.

In the 42nd minute, Leon lobbed a beautiful chip over the Panamanian defence for Nichelle Prince, but her toe-poke effort went just wide of goal.

Despite Canada holding the bulk of possession and attempting several different approaches in attack, the game remained scoreless at halftime.

Just a minute after halftime, Leon forced a fingertip save from Panama goalkeeper Yenith Bailey with a right-footed blast from 25 yards out.

Canada’s constant pressure finally paid off in the 64th minute when Julia Grosso showed quick footwork in front of goal and put home her third goal in two games.

But Panama, ranked No. 57 in the world, didn’t roll over. In the 80th minute, Rosario Vargas drifted in a long-range shot that had Canadian goalkeeper Sabrina D’Angelo reacting quickly to ensure her net was covered.

The second half saw six minutes of stoppage time, owing to numerous stoppages with Panama players going down. And at the very end, Canada nearly found a second goal, as Jayde Riviere whipped in a well-placed ball across the face of goal that just barely eluded a sliding Jordyn Huitema.

The 1-0 final score assured Canada a top-two finish in Group B, and sets up an extremely interesting matchup against Costa Rica. The two teams are tied in points, goals scored and goal differential.

That means a win for either side would clinch first place, but a draw would mean turning to the “fair play points” tiebreaker, based on yellow and red cards received during the tournament.

Whoever wins Group B will likely avoid facing the USA (ranked No. 1 in the world) in the semifinals, leaving plenty for Canada to play for on Monday.

Canada controlled the play from start to finish and opened the tournament with a resounding win.

But Sinclair would find the breakthrough in the 27th minute, putting a powerful header past goalkeeper Kimika Forbes, off of a pinpoint cross from Ashley Lawrence. It was Sinclair’s 190th goal for Canada, extending her lead atop the list of international goal scorers in soccer history.

The captain was the focus again several minutes later when she was fouled inside the penalty area, earning Canada a penalty kick. But Jessie Fleming, who famously scored the winner against the USA in the Tokyo 2020 semifinals, put the spot kick over the crossbar.

The Canadians poured on the pressure as the first half wound down. First, Forbes denied a powerful strike from Deanne Rose with a fingertip save. Then, in stoppage time, Janine Beckie found the back of the net but the goal was disallowed due to offside.

Despite a relentless attack from Canada (ranked No. 6 in the world), the defensive efforts from Trinidad & Tobago (No. 76) held the halftime score to 1-0.

To shake things up, Priestman made a massive substitution in the 60th minute, bringing in Jordyn Huitema, Adriana Leon, Julia Grosso and Allysha Chapman. The move paid off seven minutes later, as quick passing inside the penalty area between Fleming and Huitema set up Grosso to score Canada’s second goal of the night.

It was the 21-year-old’s first goal from open play for the national team, though she did score the decisive penalty kick in last summer’s gold medal shootout.

And it wouldn’t take long for Grosso to double that total; in the 79th minute, she received a low cross from Beckie and slotted home from close range.

Fleming would get her goal in the 84th minute, turning home a nice cutback from Beckie. About a minute later, Beckie would notch a goal of her own, with Grosso providing the incisive through ball past an exhausted Trinidad & Tobago defence.

Beckie would be provider once again in the first minute of stoppage time, as yet another low cross was deftly turned home by Huitema for her 15th national team goal.

The late onslaught puts Canada in first place in Group B on goal differential, ahead of Costa Rica, who defeated Panama 3-0 on Tuesday night.