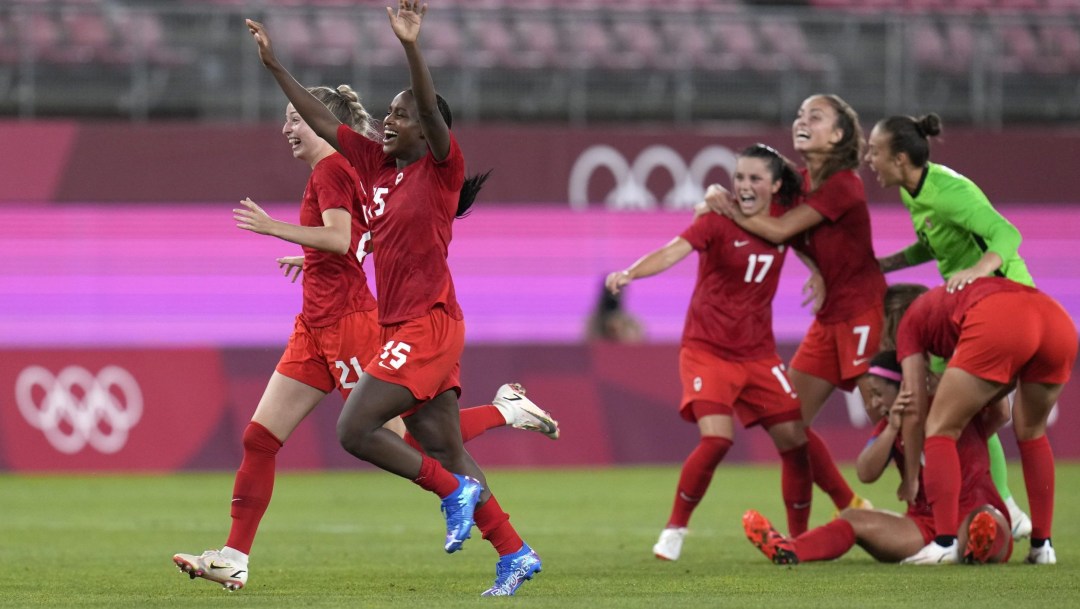 Team Canada has guaranteed themselves an Olympic medal in women’s soccer with a win that was 20 years in the making.

Canada defeated the United States 1-0 in the semifinal on Day 10, gaining some measure of redemption for the Americans’ victory in the semifinal at London 2012. Prior to these Games, Canada (No. 8 in the FIFA Women’s Ranking) hadn’t beaten the USA (No. 1) in a senior international match since 2001.

It was a tight, evenly played first half with neither team getting a clear-cut chance at goal. The biggest talking point was starting American goalkeeper Alyssa Naeher suffering an early knee injury and needing to be replaced by Adrianna Franch.

With both teams seeking a shakeup, the substitutions came furiously at the 60th minute. Quinn and Nichelle Prince, who’d looked dangerous for Canada, were replaced by Julia Grosso and Deanne Rose. The Americans introduced the highly experienced trio of Megan Rapinoe, Carli Lloyd and Christen Press.

The tempo changed immediately, with the Americans forcing a string of good saves from Stephanie Labbé.

But the game was turned on its head in the 72nd minute. Rose chased down a long ball into the American penalty area and was tripped by American defender Tierna Davidson.

Captain Christine Sinclair initially stepped up to take the ensuing penalty kick, but then deferred to youngster Jessie Fleming.

The 23-year-old placed her shot perfectly to score on Canada’s first shot on target in the entire match.

Fleming said that she’d decided the night before where she would place her shot, if she were to take a penalty kick in the match.

“I was just trusting myself in that moment to put it in the spot,” she said. “I knew I could do it.”

Canada had conceded late goals earlier in the tournament, against Japan and Great Britain, making the final portion of the semifinal even more nerve-wracking. But head coach Bev Priestman said the team learned from those experiences.

“We put attention on that when it happened to us in the group stage and it set us up nicely,” she said. “To grow through adversity only helps you push on in a tournament.”

Priestman said she was “over the moon” for players like Sinclair, who’ve carried the pain of that London 2012 semifinal loss with them all this time.

“All credit to the players, they left everything out there, it meant so much to them to get to this final,” she said. “You’ve seen that in the shift that they put in.”

Fleming, who was 3 years old when Canada last beat the USA, expressed delight at being able to contribute at such a crucial moment.

“There’s a group of players on our team who have been working for this for 20 years,” she said. “Just seeing them so excited, crying after the match and in that moment, it just means a lot to us as a group.”

Canada will now play Sweden, the reigning silver medallists, in the gold-medal match on Thursday (10 p.m. ET). Win or lose, this will be Canada’s best-ever Olympic result in women’s soccer, following bronze medals at London 2012 and Rio 2016.