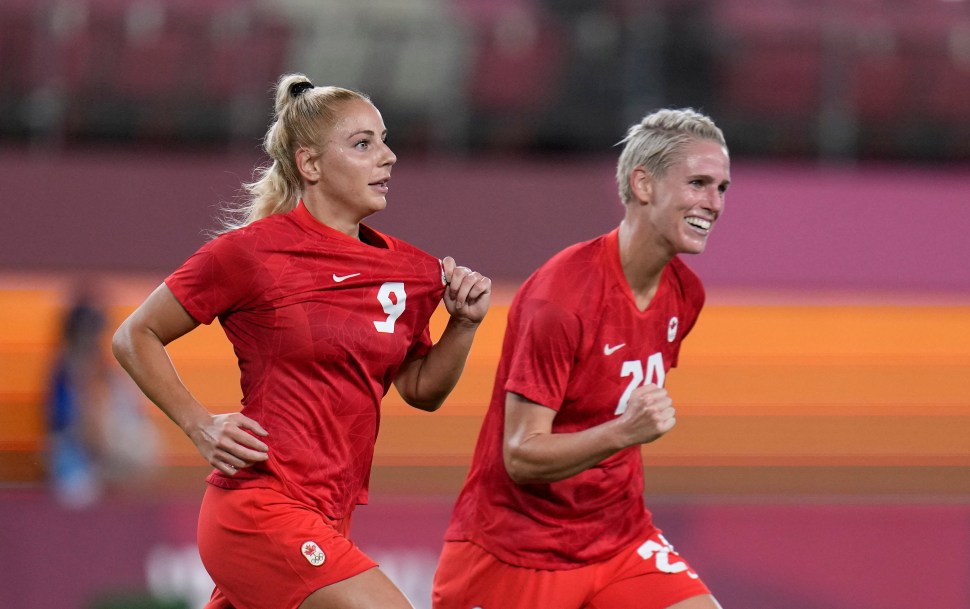 It’s not the result they wanted, but it was good enough for Canada to reach the women’s soccer quarterfinals at Tokyo 2020.

For the second time in the tournament, Canada let a potential win slip away in the game’s dying minutes, settling for a 1-1 draw with Great Britain on Day 4. The result means that Canada finishes second in Group E with a win and two draws.

With a quarterfinal berth all but assured even before kickoff, head coach Bev Priestman rotated her lineup. The Canadian goal came from Adriana Leon, one of four players (along with Evelyne Viens, Vanessa Gilles and Sophie Schmidt) making their first starts of the tournament.

Notably, all-time top scorer Christine Sinclair was kept out of the lineup entirely, with Kadeisha Buchanan wearing the captain’s armband in her place. Stephanie Labbé was back in goal after suffering an injury in Canada’s opening 1-1 draw with Japan.

It was a cagey first half on a soggy day at Kashima Stadium, with neither side wanting to show too much.

The best early chance came from Great Britain in the 33rd minute. Rachel Daly received a pass behind the Canadian back line, but was denied a shot by a good recovery tackle from Ashley Lawrence.

Jordyn Huitema, the highly touted 20-year-old striker, came on as a halftime substitute to earn her first minutes as an Olympian. Jessie Fleming also joined the action, with Deanne Rose and Janine Beckie, who scored both of Canada’s goals against Chile, getting some rest.

But it was Leon who’d find the scoring breakthrough in the 55th minute. Lawrence made a dashing 40-yard run down the left flank before fizzing a pass across the British penalty area. It found Leon, whose composed left-footed finish was her 20th career goal for Canada.

Great Britain came tantalizingly close in the 68th minute. Caroline Weir’s shot eluded Labbé, but struck the crossbar, then the goal post, before rolling to safety. But Weir had the last laugh in the 85th minute, as her long-range shot took a massive deflection off a defender and found the back of the Canadian net.

With Olympic newcomer Gabrielle Carle coming on as a second-half substitute, all but one of Canada’s 22 players have seen the field in Canada’s three group-stage games. It was a purposeful decision by Priestman ahead of the all-important knockout stage.

“We rested some legs [against Great Britain] and we’re ready to go,” she said after the match. “I just went into this game with the bigger picture in mind, and that’s what those subs reflected.”

Priestman admitted that the result against Great Britain was somewhat disappointing, given how it came about. But she said that going undefeated in the group stage is “nothing to scoff at”. Canada will come out all guns blazing in the next game, and go from there.

“We’re absolutely clear: we want to get on that podium.”

Canada moves onto the quarterfinals (Friday, 4 a.m. ET) to face a familiar Olympic opponent: Brazil. Those two teams met in the bronze-medal match at Rio 2016, in which Canada earned a 2-1 victory for their second consecutive Olympic bronze.