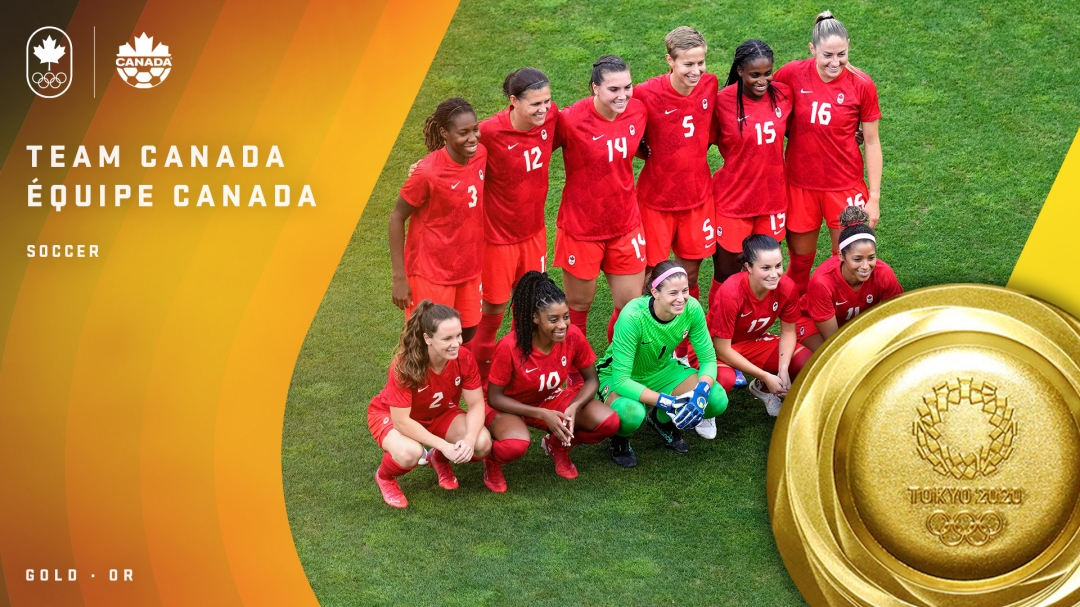 The goal for Team Canada coming into Tokyo 2020 was to change the colour of their medal — and that’s exactly what they did.

The Canadians won gold in women’s soccer on Day 14, after the final against Sweden ended 1-1 and Canada prevailed 3-2 on penalty kicks. It’s the team’s best-ever Olympic result, following bronze medals at London 2012 and Rio 2016.

Christine Sinclair, Sophie Schmidt and Desiree Scott are now three-time Olympic medallists, while 11 other players became two-time medallists. One of those is midfielder Quinn, who has now become the first openly transgender and non-binary athlete in any sport to ever win an Olympic medal.

This is Canada’s 22nd medal at Tokyo 2020, matching the nation’s total from Rio 2016 and Atlanta 1996. It was also the first time that the gold-medal match in women’s soccer has been decided on penalty kicks.

The match was originally scheduled to kick off at 11 a.m. local time on Friday at Olympic Stadium. But after a request from both teams to avoid the scorching midday heat, it was moved to 9 p.m. local at Yokohama International Stadium.

Canada weathered some early pressure, with Stephanie Labbé called into action to make important diving saves in the 17th and 29th minutes. But the Swedes had their breakthrough in the 34th minute, as Stina Blackstenius got behind the Canadian defence and found the back of the net.

Head coach Bev Preistman made some halftime adjustments, bringing in Julia Grosso to replace Quinn and Adriana Leon to replace Janine Beckie. Then in the 63rd minute, Deanne Rose entered the game in place of Nichelle Prince.

Shortly thereafter, Sinclair was fouled in the penalty area and the referee, after video review, awarded Canada a penalty kick. Just like in the semifinal against the United States, Jessie Fleming stepped up and scored to make it 1-1.

Grosso, a 20-year-old first-time Olympian, scored the winning goal for Canada on the sixth round of penalty kicks. Fleming and Rose also scored for Canada in the shootout, while Labbe made two saves.