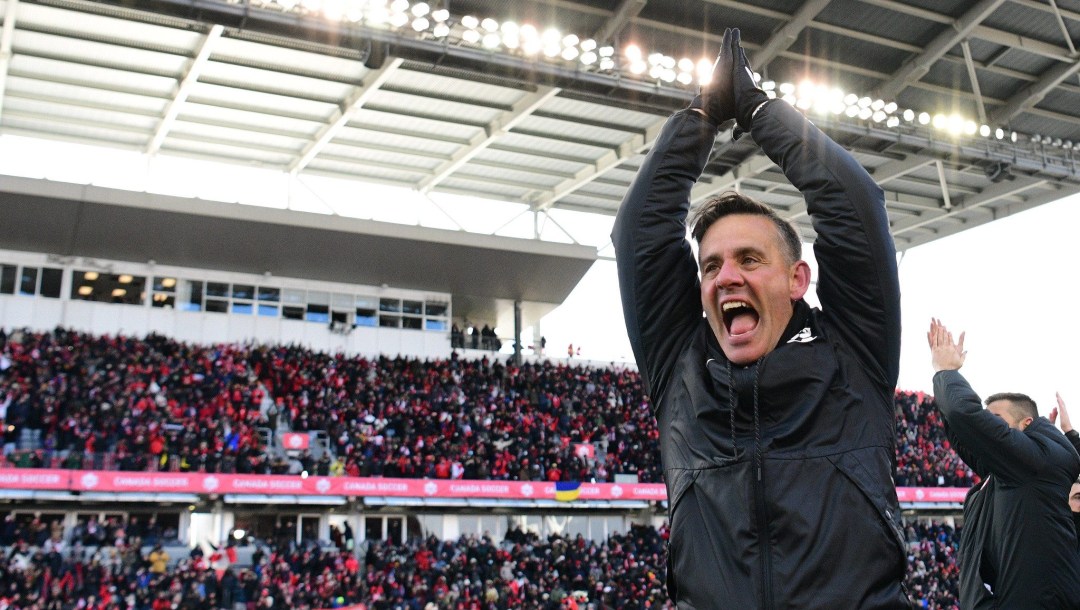 No head coach has ever influenced an entire nation’s soccer fortunes quite like John Herdman has done in Canada.

That’s a bold claim, to be sure. There are myriad tales of managers rejuvenating moribund national teams or leading plucky underdogs on rags-to-riches quests. But how many involve working magic on both the men’s and women’s sides of the game?

Beyond Herdman, very few. Indeed, when Canada takes the field in Qatar later this month, he’ll become the first manager in history to lead teams into both the men’s FIFA World Cup and the FIFA Women’s World Cup.

Absolutely no one could have predicted this is how things would turn out when Herdman was first hired. So, how did we get here?

Arriving on the scene

His predecessor as Canadian head coach, Carolina Morace, had boasted name recognition and an impressive resumé upon arrival. She surprised many on the team when she resigned her post following Canada’s last-place finish at the 2011 Women’s World Cup.

Herdman, then 36 years old, was tasked with picking up the pieces — and they came together quickly. Just a month after he was hired, Canada won a first-ever gold at the Pan American Games in Guadalajara, Mexico.

“We were knocked down after the World Cup, we fell down,” goalkeeper Karina LeBlanc told the CBC at the time. “John came in and he said: ‘What do you guys want?’ We said, ‘We want a gold medal.'”

Herdman’s capacity to motivate and inspire players, as we’d come to learn, is one of his trademark strengths. And this was just a first glimpse of what was possible.

Bringing Canada into the bronze age

In fairness, Herdman certainly had solid personnel to work with. Upon his arrival, national-team stalwarts such as LeBlanc, Erin McLeod, Diana Matheson, Rhian Wilkinson and Melissa Tancredi were all in the prime of their careers.

And oh, there’s also captain Christine Sinclair, one of the greatest players of all time.

Still, heading into London 2012, the team had plenty to prove. In their only previous Olympic appearance four years earlier, Canada had been knocked out in the quarterfinals. And in London, the team stumbled out of the gate with a 2-1 loss to Japan.

But the team didn’t crumble as they had a year earlier at the World Cup. They gave the top-ranked Americans all they could handle in an epic semifinal, then claimed a thrilling last-minute win in the bronze-medal match.

Herdman’s squad played the USA again a year later, in a home friendly in Toronto promoted as a rematch of that Olympic semifinal. While it fell short of that billing, one roster decision stood out: 17-year-old Kadeisha Buchanan played the full 90 minutes, admirably shutting down American star Abby Wambach.

Indeed, when Canada successfully defended their Olympic bronze medal at Rio 2016, it was thanks in large part to a group of under-21 players — Buchanan, Ashley Lawrence, Janine Beckie, Quinn, Jessie Fleming, Deanne Rose.

They’re household names now, but at the time, they were just kids. Herdman believed in those youngsters and they repaid the faith. It’s a trend that would play out time and again over the years.

Now for something completely different

By the middle of 2017, a road map for both Canadian national teams seemed clear. Herdman would guide the women through the 2019 World Cup and the 2020 Olympic cycle while newly-hired Octavio Zambrano would try to take the men to Qatar 2022.

Zambrano came into his job with nearly a quarter century of coaching experience on three different continents and the early on-field returns with the Canadian men’s team were positive. So it came as a shock to everyone when, on January 8, 2018, Canada Soccer announced that Herdman would be taking over.

The move was met with skepticism from those who pointed out Herdman had never coached a men’s national team. But the Englishman didn’t shy away from the scrutiny. In February 2019, he boldly predicted Canada would qualify for the 2022 FIFA World Cup, a “crazy thought” for even some of his players given their then-world ranking of 79th and the team’s reputation over the preceding three decades.

Canada’s first major competition under Herdman was the 2019 Concacaf Gold Cup. A 2-0 lead over Haiti in the quarterfinals seemed to have Canada set for its deepest run in the tournament in over a decade. But then, a second-half meltdown and a 3-2 loss left a team in disarray with World Cup qualifying around the corner.

If Herdman was going to work his magic again, the clock was ticking.

The ascent of the brotherhood

In October 2019, a few months after that Gold Cup debacle, Canada was set to face the USA in Toronto once again. It was a competitive match with plenty at stake, but the home side hadn’t defeated their southern neighbours in nearly 35 years.

That was about to change… and it would send the team on a years-long momentum streak that hasn’t ended yet.

The starting lineup featured a pair of teenagers, 18-year-old Alphonso Davies and 19-year-old Jonathan David. It was Davies who would score the opening goal in what would be a historic 2-0 win for Canada. The post-match praise for Herdman was effusive.

“Every minute of the day, he has a motivational speech,” striker Lucas Cavallini told the CBC. “That’s why we’re here.”

Said David: “This guy knows what he’s doing… because he has a tactic every game.”

And that’s just it. Motivational abilities are great, but can only get a team so far. Herdman’s precise preparation and tactical flexibility have been just as important to his teams’ success, if not more so.

Those qualities were on full display once World Cup qualifying got underway in early 2021. Canada went on a remarkable run with just two losses in 20 matches to clinch a long-awaited World Cup berth and fulfill Herdman’s bold prophecy.

Putting it all together

Though the landscapes are somewhat different for the two national teams, they had one thing in common before Herdman arrived. Success was the hope, but never the expectation. Fans had become accustomed to not getting their hopes too high.

Now, a podium finish is the goal for the women’s national team in every tournament. Meanwhile, the men aren’t just going back to the World Cup; they’re entering with the chance to pick up some points.

It all started back at London 2012. And as for where it goes? That chapter is yet to be written.