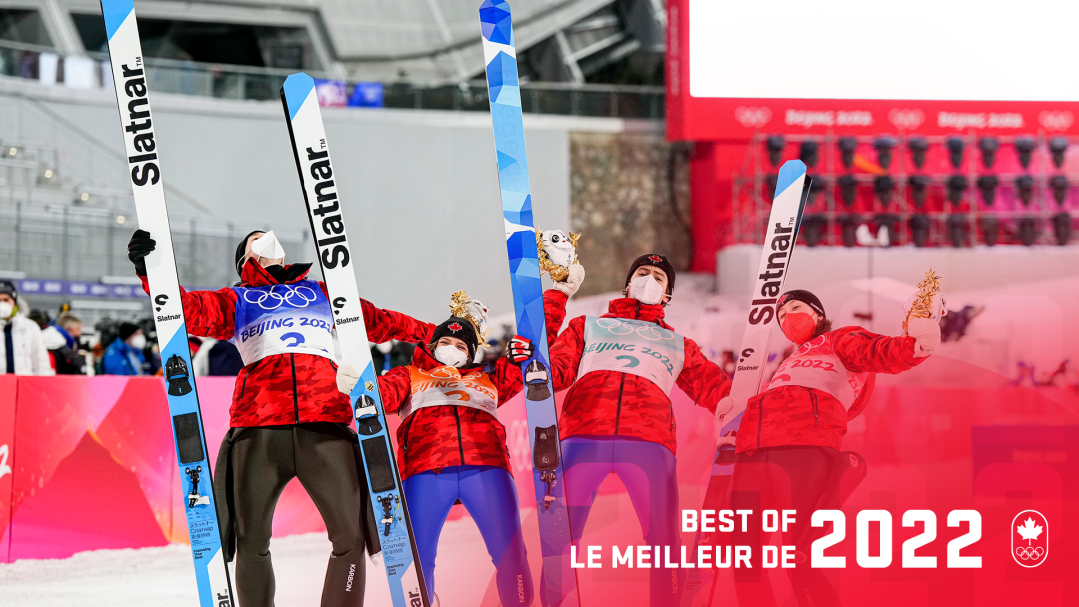 Between the Olympic Winter Games and the plethora of world championships that took place in 2022, there were a lot of standout performances by Team Canada athletes this year.

We want to give a shout out to as many as possible.

Though many athletes and teams were spotlighted earlier in our Best of 2022 series, here are a few more we didn’t want to forget before the calendar flips over to 2023:

History made in ski jumping

It took almost a century, but at Beijing 2022 Canada finally won its first ever Olympic medal in ski jumping. The quartet of four-time Olympian Mackenzie Boyd-Clowes and first timers Alexandria Loutitt, Matthew Soukup, and Abigail Strate made the big breakthrough in the Olympic debut of the mixed team event, winning the bronze medal.

“I’m still processing it. It doesn’t feel real yet!”

Loutitt can be forgiven for her disbelief as no one would have predicted a ski jumping podium for Canada. To pursue their passion, the team is based in Slovenia because there are no suitable ski jumping training facilities at home. They are hopeful that the way they overcame adversity inspires others and has a long term positive impact.

Strate is also on the cusp of being a solo star. At the first on-snow World Cup of the 2022-23 season, she just missed a medal as her fourth-place finish was the best result by any Canadian ski jumper in seven years. She followed up with another fourth-place finish the following week, which just amped up the anticipation for what could be next.

On the last day of Beijing 2022, Justin Kripps, Ben Coakwell, Ryan Sommer, and Cam Stones got their storybook ending. After four years growing together, they won the bronze medal in four-man bobsleigh. It’s almost unheard of for a crew to stay intact that long, but Coakwell said he felt in his gut the potential they had.

Though it was a full team effort, the pressure is always strongest on the pilot. But Kripps drove as he needed to to prevent a German podium sweep. In doing so, he became the first Canadian pilot to win Olympic medals in the two-man and four-man events, as he added to the two-man gold he won at PyeongChang 2018.

“This team that has just been grinding for four years… for it to culminate in an Olympic medal is just amazing,” said Kripps, who would later in the year announce his retirement on the same day as Sommer and Stones.

Earlier in the Games, Christine de Bruin won the bronze medal in the Olympic debut of the women’s monobob event, proving that she was one of the best drivers in the world.

For the first time since 2018, Canada was back on the podium at the Women’s World Curling Championship. After winning their third straight national title at the Tournament of Hearts, Team Einarson (skip Kerri Einarson, third Val Sweeting, second Shannon Birchard, lead Briane Meilleur, fifth Krysten Karwacki) won the bronze medal in front of the home fans in Prince George, B.C.

Saved their best for last

Vanessa James and Eric Radford competed together for just one season, but they made it a memorable one. At the 2022 ISU World Figure Skating Championships in Montpellier, France they landed themselves on the pairs podium. Fifth after the short program, they came through with their best free skate of the season to move up to win the bronze medal. After taking some time to celebrate and reflect, they announced their retirement in July.

It wasn’t the gold that is always hoped for, but Canada gave its all at the men’s IIHF World Hockey Championship in Finland, coming away with the silver medal. They fought to make it to the final where they ran into a Finnish team that not only had the home crowd behind them but also featured many players who had been part of their country’s first Olympic gold in hockey in February. Still, Canada pushed them to overtime and came home with heads held high.

Golden in the ring

Tammara Thibeault finally got the gold. After winning bronze the last time the IBA Women’s World Boxing Championships were held in 2019, Thibeault steamrolled her way to the final of the women’s 75kg event in Istanbul and claimed the title of world champion. Later in the summer, she would also win gold at the Commonwealth Games.

Thibeault wasn’t alone on the world podium. In the 66kg event, Charlie Cavanagh captured silver in her world championship debut. Her only defeat came against a reigning Olympic and world champion who was fighting in front of her home fans in Turkey.

Silver on the beach

In just their fourth tournament together, Brandie Wilkerson and Sophie Bukovec captured the silver medal at the FIVB Beach Volleyball World Championships in Rome. While it was a dynamic debut, the partnership would not be a long term one. In October, it was announced that Wilkerson would partner with Melissa Humana-Paredes while Bukovic would join up with Sarah Pavan in a major swap amongst Canada’s elite teams on the road to Paris 2024.

Brooke Henderson keeps making history. With two more LPGA Tour titles in 2022, she upped her career total to 12, increasing her mark for most pro wins by a Canadian golfer. In June, she claimed the ShopRite LPGA Classic in a playoff. But her greatest glory of the year came at the Evian Championship in July as she became the first Canadian golfer to win multiple major titles.

It was all part of an incredibly consistent season that saw her earn 10 top-10s as she competed week in, week out against the best in the world.

The big question surrounding Canadian diving this year was who would step up to fill the holes left by the retirements of Jennifer Abel and Meaghan Benfeito. We didn’t wait long for the answer.

READ: Mia Vallée back on podium with silver at FINA World Championships

In her debut at the FINA World Championships this summer, 21-year-old Mia Vallée won silver in the 3m springboard and bronze in the 1m springboard. She also teamed with 20-year-old Margo Erlam to finish fifth in the 3m synchro. Vallée cemented her new star status at the Commonwealth Games a month later when she won 1m gold, 3m bronze, and shared 3m synchro bronze with Erlam.

This year was also one of resurgence for the Canadian men’s diving team. At 20 and 19, respectively, Rylan Wiens and Nathan Zsombor-Murray won bronze for Canada’s first ever world championship medal in the men’s 10m synchro event. They had only competed together for the first time just a few weeks before. They followed up with a silver medal at the Commonwealth Games where Wiens also won silver in the individual 10m platform.

Hugo Houle wins for his brother

It was newsy enough that Hugo Houle’s victory in Stage 16 of the Tour de France made him just the second Canadian man to ever win a stage of the most prolific of cycling’s Grand Tours. But as he coasted through the last few kilometres with a commanding lead, his emotions started to build before they spilled over once he crossed the finish line.

READ: Houle becomes second Canadian to ever win a stage at the Tour de France

For a decade, Houle had longed to win his first international road race in memory of younger brother Pierrik, who had been killed by a drunk driver while he was jogging in 2012. Only the most stoic of people could hold back the tears while watching Houle get hugged by his team – including fellow Canadian Michael Woods – and dedicate his “unreal” win to Pierrik.

Paddling to the podium

Canadian paddlers enjoyed the opportunity to race in home waters at the ICF Canoe Sprint World Championships in Dartmouth, Nova Scotia. Six medals were won by Canadian boats, though none in Olympic program events.

With only four crew members carrying over from the Olympic gold medal-winning boat, Canada captured bronze in the women’s eight at the World Rowing Championships.

“We went out and we wanted to have a race that we would have no regrets and could be proud of every stroke and I think we did that,” said Sydney Payne.

Medals on the mat

Canada came away from the World Wrestling Championships with two bronze medals. Linda Morais, former world champion at 59kg, had a successful move up to the 68kg category as she looks ahead to Paris 2024. Karla Godinez Gonzalez earned her own medal in the non-Olympic 55kg event.

Two years away from the Olympic debut of breaking, Canada can boast the b-boy world champion. Philip Kim (aka Phil Wizard) won the WDSF World Breaking Championships a year after he had to settle for silver. We’re looking forward to many more great battles from the b-boy.

It wasn’t a huge surprise that Catherine Beauchemin-Pinard and Jessica Klimkait both came home from the World Judo Championships with medals. After all, they are Olympic medallists. But if Beachemin-Pinard’s 63kg silver and Klimkait’s 57kg bronze were in the expected category, Kyle Reyes’ silver in the men’s 100kg event certainly was not.

Not since 1999 had a Canadian judoka won a world championship medal in his weight class. Ranked outside the top 30 coming in, Reyes earned some upsets and took advantage of others to record the best result of his career.

Dylan Bibic had a world championship debut for the history books. The 19-year-old track cyclist became the first Canadian to ever win the world title in the men’s scratch race. He was also Canada’s first world champion in any men’s track cycling event in almost four decades. His reward? Getting to sport the coveted rainbow jersey distinctive to world champions for an entire year.

Maude Charron may be an Olympic champion, but in a way she was starting all over again in 2022. The weight class in which she had been victorious at Tokyo 2020 was removed from the Olympic program for Paris 2024. So she made the decision to drop down and compete at 59kg. In her first international competition at this new weight, Charron won bronze at the 2022 IWF World Championships.