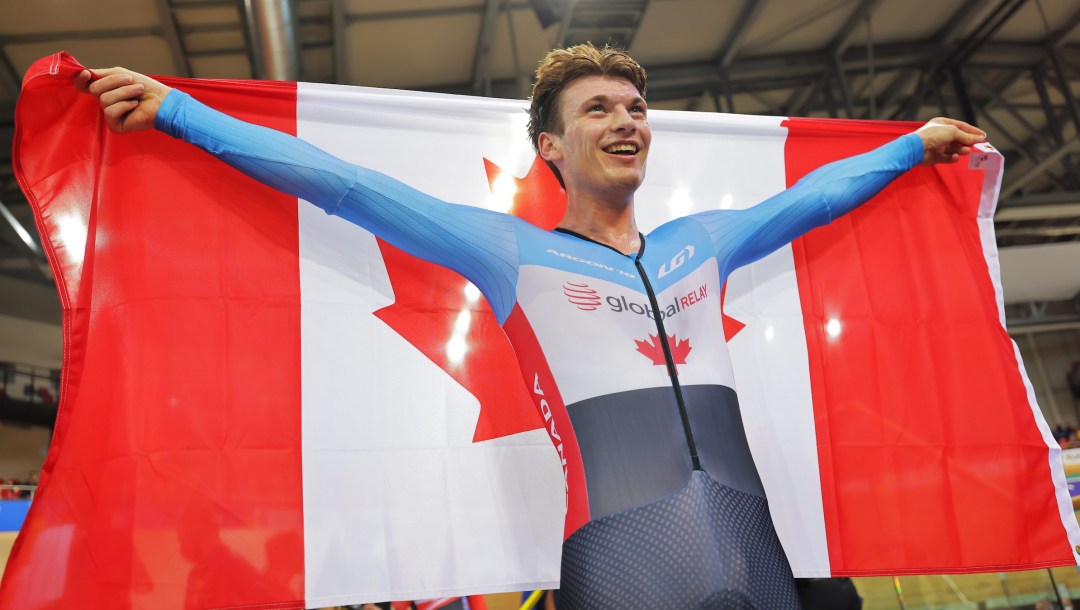 It was an exciting last couple of days for Canadian sports fans.

Félix Auger-Aliassime kept himself busy by winning in Florence, Dylan Bibic made Canadian history at track cycling worlds, and Olympic medallists in short track and long track speed skating got their seasons started on a high note.

Tennis: An ace seals the deal in Florence! 👀 🎾

At the ATP 250 Firenze Open in Florence, Italy, Félix Auger-Aliassime defeated American J.J. Wolf in the final for his second career ATP singles title. In Sunday’s final, the Canadian claimed victory in straight sets (6-4, 6-4). He served an ace for the championship-winning point. The 22-year-old won 85 per cent of his first serves and had 11 aces in the match while Wolf only had three.

With this weekend’s result, Auger-Aliassime further solidifies his positioning for the ATP Finals in Turin next month. This week he will look to continue his streak at the European Open, another ATP 250 event. He’s seeded second in the draw behind Hubert Hurkacz and will have an opening round bye.

At the WTA 500 San Diego Open in California, Gabriela Dabrowski and her partner Giuliana Olmos of Mexico finished as the runners-up in women’s doubles. The second-seeded pair fell in the final match in three sets (1-6, 7-5, 10-4) against Americans Coco Gauff and Jessica Pegula.

Dabrowski comes off 11 straight wins, as her undefeated record since the U.S. Open comes to an end. During this stretch, she only lost one set in 11 matches in addition to capturing a pair of titles in Chennai and Tokyo.

Earlier this week, Dabrowski and Olmos qualified for the WTA Finals in Fort Worth, Texas set to begin at the end of the month. This will be their first appearance as a team at the year-end tournament and Dabrowski’s fourth appearance overall.

The UCI Track World Championships were held over the weekend in Saint-Quentin-en-Yvelines, France — the venue that will host Olympic track cycling at Paris 2024. Dylan Bibic finished first in the men’s scratch race to claim the coveted rainbow jersey in the event. At just 19-years-old, the endurance rider became the first Canadian man to win a world title in track cycling in almost four decades and is Canada’s first ever world champion in the scratch race.

In the women’s omnium, Maggie Coles-Lyster was knocking on the door of the podium with a fourth-place finish. After the four races, the Canadian had collected 97 points, leaving her two points shy of the bronze medal.

Canadian ice dancers Marjorie Lajoie and Zachary Lagha captured gold at the Budapest Trophy. This marks their second international victory of the season on the ISU Challenger Series. The duo finished first in both the rhythm dance and free dance programs to crack the 200-point barrier for the first time on international ice. Their 202.40 overall score is a new personal best.

Fellow Canadians Alicia Fabbri and Paul Ayer finished just off the podium in fourth position with 168.85 points in their international season debut.

Amélie Kretz finished eighth at the Triathlon World Cup in Tongyeong, South Korea. The Canadian finished with a time of 1 hour 58 minutes and 44 seconds on the Olympic distance course (1.5km swim, 40km bike, 10km run). After coming out of the water in 13th place, Kretz missed the first group of cyclists by a few seconds during the transition, which would have allowed her to stay with the leaders.

With the third fastest time in the running leg, she climbed a few places to equal her best result of the season.

The Canadian Short Track and Long Track Speed Skating Championships took place together for the first time ever at the Centre de glaces in Quebec City. Several skaters took the opportunity to start a new Olympic cycle in a good way. Here are some highlights from the competition:

Laurent Dubreuil stole the show on the opening day, finishing the men’s 500m in a blistering 34.379 seconds to claim the national title in front of family and friends. This is one of the fastest 500m races ever on a low altitude oval. He went on to also win gold in the men’s 1000m. In the women’s 500m, Carolina Hiller earned her first career national title, skating to a personal best time of 38.420 seconds.

Triple Olympic medallist Isabelle Weidemann also got her season off to an impressive start with gold medals in the women’s 3000m and women’s 5000m, as she set a track record of 6:48.585 in the latter. Ted-Jan Bloemen was victorious in the men’s 5000m and 10,000m.

Ivanie Blondin also earned two national titles in the 1000m and 1500m, the latter with a track record time of 1:55.509. Connor Howe took the victory in the men’s 1500m. He would also be crowned national champion in the mass start alongside Valérie Maltais in the women’s event.

Dubois won both 500m races and finished first in one 1000m race and one 1500m race. Pascal Dion ranked second overall while Maxime Laoun was third. Dion won the 1500m race that Dubois did not while Laoun won the other 1000m race.

Boutin won both 500m races as well as one 1000m race. Placing behind her in the overall standings was Courtney Sarault who won a 1500m race and the 1000m that Boutin did not. Renee Steenge was third overall after winning one of the 1500m races.