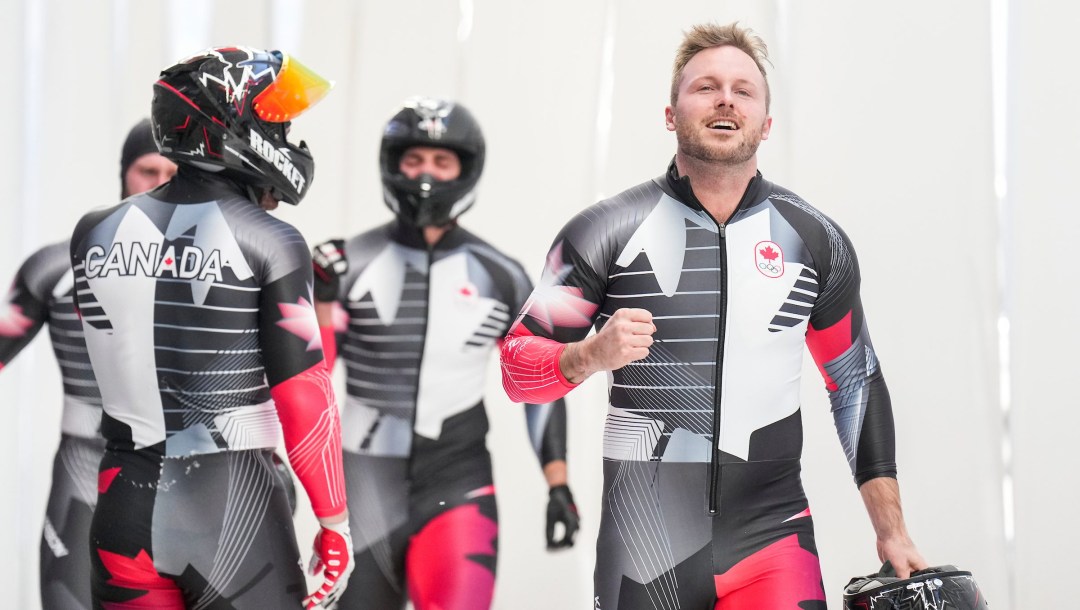 Justin Kripps and teammates Ryan Sommer, Cam Stones and Ben Coakwell had a clean final run to claim the bronze medal in the four-man bobsleigh on the final day of the 2022 Olympic Winter Games in Beijing.

Kripps needed a clean run to hold off Christoph Hafer of Germany and prevent a German sweep of the medals. He did just that and although he posted the fastest speed in both the third and fourth runs, he wasn’t able to close the gap on the top two German teams.

The bronze was Canada’s first four-man medal since Lyndon Rush drove his sled to bronze at Vancouver in 2010 and only Canada’s third Olympic medal ever in the event. Vic Emery was the pilot of the gold medal-winning crew at Innsbruck 1964.

“It’s crazy,” Coakwell said of the feeling of standing on the podium.” I did some reflecting about our journey last night and I feel like everything just lined up for us. When we came together four years ago I had a feeling in my gut. We proved what a team can do when it’s allowed to grow together. It’s an insane feeling to have this happen. It’s like a dream.”

For Kripps, who faced the pressure of driving to try to hold off Hafer, it was “definitely a combination of joy and relief. I like to think I deal with pressure really well. I train for it, do mental training and meditation. When you cross that finish line all of sudden you’re aware of how much pressure there was so in that moment it felt amazing to have accomplished it.

“It was such a battle for third with Hafer. He was storming right from the second run. The Germans have been so fast down the track…their equipment is running super, super well.

“I made a mistake coming out of corner five but everything else was pretty much perfect. I thought it was going to be down to the hundredths and it was.”

One of the keys, he said, was to not get caught up in the moment and just use their experience to have the run needed to hold the third-place position.

“Just do our thing, try to use the last four years of our racing together and all my driving experience to just not get too caught up in the race,” he said of his thoughts before the final run. “Just focus on the process and try to lay down clean runs and get something on the push, we didn’t push that well on the third heat so we wanted to really get a couple of hundreds out of it because we knew everything was going to matter.”

Christopher Spring with Mike Evelyn, Sam Giguere and Cody Sorensen in the sled, had a solid forth run of 59.46 to move up two spots to finish ninth in 3:56.99.

Taylor Austin with teammates Daniel Sunderland, Jay Dearborn and Chris Patrician, were unable to qualify for the final run and finished in 23rd position.

The Kripps sled was third after the first two runs a day earlier, about four-tenths of a second off Friedrich’s pace. The Canadians had the slowest start (4.96 seconds) and the slowest time (58.44) of the top three sleds in the third run. That allowed the two top German teams to solidify their gap over the Kripps crew.

Heading into the final run Kripps was more than four-tenths of a second behind Lochner who was two-tenths back of Friedrich, who once again posted the top run time of 58.17. All three had slower final runs as the track ice continued to soften and slow the sleds. Friedrich had the fastest final run of 59.13. Lochner was timed in 59.30 and Kripps in 59.27.

The Yanqing National Sliding Centre track, which resembles a dragon tail winding along a ridge has a height difference from top to bottom of about 150 metres, enabling the drivers to hit speeds of up to 140 kilometres an hour. Of course, they also have to navigate the 16 curves and the only 360-degree loop on any bobsleigh track in the world, including the infamous “dragon’s tail” S-bend in turns 12 and 13.

Few other than the top half dozen sleds managed to cleanly navigate the 1110-metre long course. Friedrich and Lochner both rubbed the wall but neither touch interfered with their speed enough to change their positioning.

The win for Friedrich is his fourth Olympic gold medal and his second bobsleigh double-double, having won the two-man earlier in the Games. He is the first man to achieve that double-double twice. Kripps makes his own history as the first Canadian pilot to win Olympic medals in the two-man and four-man events. This bronze will join the gold from the 2018 Olympic two-man race in his trophy case.

But it clearly meant a lot to Kripps that his crew had the performance they wanted at the time it mattered most.