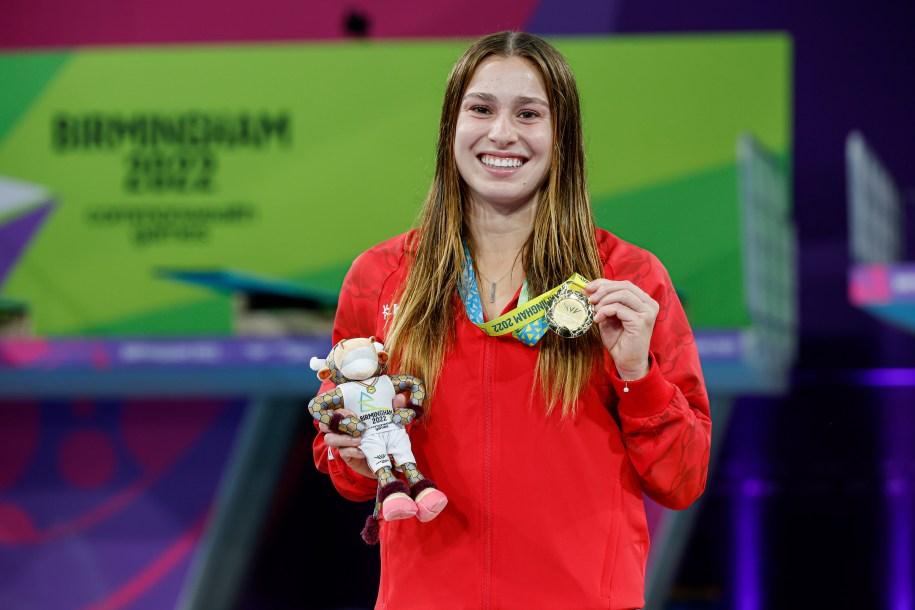 On the eighth day of competition at the 2022 Commonwealth Games in Birmingham, England, Canadian athletes won eight medals.

There were two in the diving pool as Mia Vallée continued her meteoric rise and six on the wrestling mat highlighted by a dominant performance from Amar Dhesi.

Here’s a quick look back at the action, including some other Canadians who maintained their march towards the podium:

Mia Vallée was the model of consistency in the final of the women’s 1m springboard. After winning bronze in this event at the FINA World Championships in late June, Vallée claimed the Commonwealth Games gold medal. She totaled 291.85 points from her five dives, giving her a 12.25-point margin of victory.

After ranking second by less than half a point following the first dive, Vallée took over top spot and never relinquished it. Her teammate Margo Erlam placed ninth in the final.

Rylan Wiens and Nathan Zsombor-Murray followed up by winning the silver medal in the men’s 10m synchro event. They totalled 413.85 points for their six dives as they finished 15.93 points back of the gold medallists, Matty Lee and Noah Williams of England. The English duo were the silver medallists at the FINA World Championships where the Canadians won bronze. Wiens and Zsombor-Murray finished just 1.29 points ahead of the bronze medallists, Domonic Bedggood and Cassiel Rousseau of Australia.

There were six Canadians in medal matches on Friday, including four who were wrestling for gold.

Amar Dhesi was the only one able to claim a gold medal on the day, earning the victory by fall in the men’s 125kg freestyle event. He dominated the match against Zaman Anwar of Pakistan, scoring his first points just 30 seconds in and getting the score up to 9-2 before the match was over in two minutes and 10 seconds.

Ana Godinez Gonazalez got the early jump in the women’s 62kg final, taking a 4-0 lead on her opponent, Sakshi Malik of India, into the mid-match break. But less than a minute after they resumed, Malik pinned the Canadian to get the victory by fall and send Godinez Gonzalez home with silver.

Linda Morais won her own silver medal in the women’s 68kg event. She lost to Blessing Oborududu of Nigeria 5-1 in that final. Lachlan McNeil will be coming home with silver in the men’s 65kg freestyle event. He was defeated 9-2 by Bajrang Punia of India in the final.

There are multiple Canadians who will get a chance to race for the podium this weekend. Brendon Rodney was second in his 200m semifinal heat and heads to the final as the fifth-fastest man with his time of 20.68 seconds. Natassha McDonald finished second in her 200m semifinal heat to only the two-time reigning Olympic champion in the event, Elaine Thompson-Herah of Jamaica. McDonald’s time of 23.21 seconds was a season best and ranks her sixth heading to the final.

It was quarterfinal day in the women’s and men’s tournaments. Sarah Pavan and Melissa Humana-Paredes earned a straight sets win (21-9, 21-11) over a Sri Lankan pair to move onto the semifinals on Saturday in which they will face Alice Zeimann and Shuanna Polley of New Zealand. The Canadians are the defending Commonwealth Games champions.

Sam Schachter and Daniel Dearing defeated their opponents from Cyprus 2-0 (21-9, 21-11) to advance to a semifinal meeting on Saturday against English duo Javier Bello and Joaquin Bello.

Michelle Li took the next step towards winning a second career Commonwealth Games gold medal. The 2014 women’s singles champion won her Round of 16 match 2-0 (21-10, 21-9) over Khan Insyirah of Singapore. Li’s quarterfinal will take place on Saturday.

A day after they won gold in the team event, Carmel Kallemaa and Suzanna Shahbazian both finished in the top eight in the individual all-around final. Kallemaa placed sixth while Shahbazian was eighth. They’ll be back on the floor on Saturday for the individual apparatus finals.