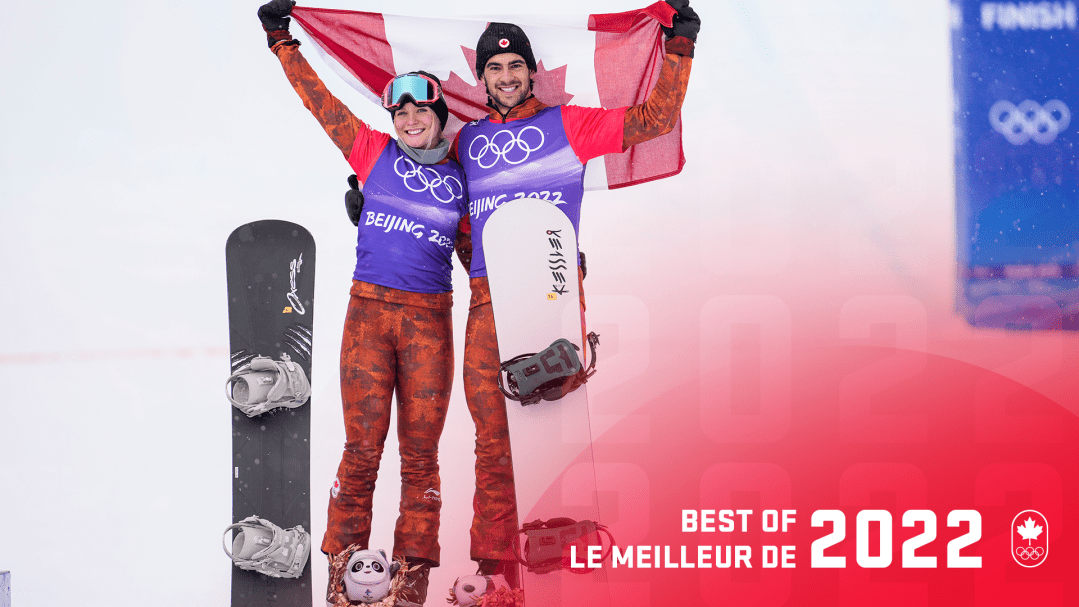 Whether we’re talking about double podiums at the Olympic Games, medal records being broken at the X Games, or the GOAT claiming yet another Crystal Globe, it was a banner year for Canadian snowboarders and freestyle skiers.

Here’s a look back at some of the highlights:

For years, the names Max Parrot and Mark McMorris have been synonymous with snowboard greatness. In 2022, it was easy to see why.

In Beijing, they shared the men’s slopestyle podium for the second straight Games as Parrot won Canada’s first ever Olympic gold in the event while McMorris earned his third consecutive Olympic bronze medal.

With his clutch final run, McMorris became the first athlete to win three straight Olympic bronze medals in the same individual event at the Winter Games.

A week later, Parrot was back on the podium after winning big air bronze in one of the most competitive finals ever. It’s hard to believe that just three years earlier he was undergoing chemotherapy for cancer.

Their podium party got started when O’Dine won bronze in the women’s event, four years after she couldn’t compete in her Olympic debut at PyeongChang 2018 because of a concussion. For an athlete with just one World Cup medal to her name, it was the ultimate breakout performance. Coming after two tough years that included the loss of her brother to cancer, it was a true tear-at-the-heartstrings moment.

The next day, it was Grondin’s turn to shine. At just 20 years old, he captured the silver medal in the men’s event, getting edged out for the victory in a photo finish.

Two days later, the pair joined forces for the Olympic debut of mixed team snowboard cross. There was drama in the women’s leg of the final when Italian racer Caterina Carpano landed on O’Dine’s back as they went over a jump. O’Dine picked herself up, climbed up the hill ahead of her, and made her way to a waiting Grondin at the bottom for the bronze medal.

More bling for the king

Mikaël Kingsbury may not have won a second straight moguls gold at Beijing 2022, but he did come home with the silver. The first male moguls skier to win three Olympic medals, he is Canada’s most decorated freestyle skier ever at the Games. While many fans were disappointed, Kingsbury was quick to acknowledge the great performance of Olympic champion Walter Wallberg of Sweden. True sportsmanship, indeed.

Of course, the Olympics were just one competition. By the end of the 2021-22 season, Kingsbury had added nine more World Cup victories to his all-time leading total. He broke through the 70-win mark and the 100-podium mark on the circuit as he won the overall season titles for moguls and dual moguls. He now has a remarkable 21 Crystal Globes in his collection.

“We’re on the Olympic podium together!”

Cassie Sharpe and Rachael Karker produced Canada’s second double podium of Beijing 2022 when they won silver and bronze, respectively, in women’s ski halfpipe. For the duo who had constantly pushed each other over the last couple of years, it was a dream come true.

Though Sharpe was the defending Olympic champion, it was remarkable she was even able to compete. At about the same time one year earlier, she was undergoing reconstructive knee surgery and had a fractured femur. Still figuring out what she was capable of just a couple of weeks before the Games, she put it all together to reach the podium.

Heading into Beijing 2022, it had been 20 years since Canada last won an Olympic medal in aerials. The young trio of Marion Thénault, Miha Fontaine and Lewis Irving ended the drought with a slightly unexpected bronze medal in the Olympic debut of the mixed team aerials event. Though they knew they had it in them, they had never before advanced to a team event final.

It was hard to believe that Thénault had only been skiing for about four years after being recruited by Freestyle Canada via RBC Training Ground. The Olympics were Irving’s first competition in months after he tore an MCL in an early season crash. At just 18 years old, Fontaine was a link back to the original glory days of Canadian freestyle skiing. His father, Nicolas, was among those nicknamed the “Quebec Air Force” during the 1980s and 1990s.

That label is ready for a redux.

Another medal for Marielle

Eight years after she was Olympic champion, Marielle Thompson earned her second ski cross medal, taking silver at Beijing 2022. She kept alive Canada’s streak of reaching the podium in every women’s ski cross event since the event joined the Olympic program at Vancouver 2010.

In a sign of Canada’s depth, four of the eight semifinalists were Canadian.

Though they didn’t have the podium performances they hoped for in Beijing, just a week or two prior, multiple Canadians conquered the X Games.

It all goes to show that on any given week, there are multiple Canadians to keep an eye on in freestyle skiing and snowboard.