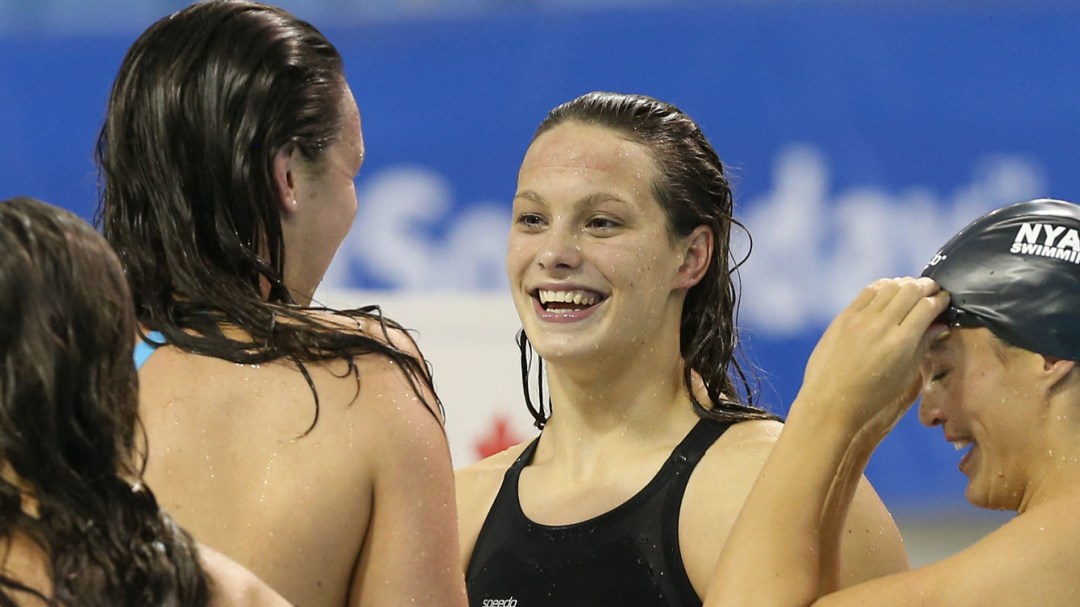 The women continued to rule the pool on the penultimate night of competition at the Canadian Olympic Swimming Trials, highlighted by Penny Oleksiak demolishing the national 100-metre freestyle record by half a second.

It was a hotly contested event, tight across the pool through the first half of the race. Oleksiak was in lane four, with record holder Chantal Van Landeghem right next door in lane five.

“My goal going in was to hang on as long as I can beside her,” said Van Landeghem.

“Penny has been lighting it up this week and she works so hard she deserves that record,” said Van Landeghem. “I’m honestly very happy she got it. She destroyed it. It wasn’t even close.” 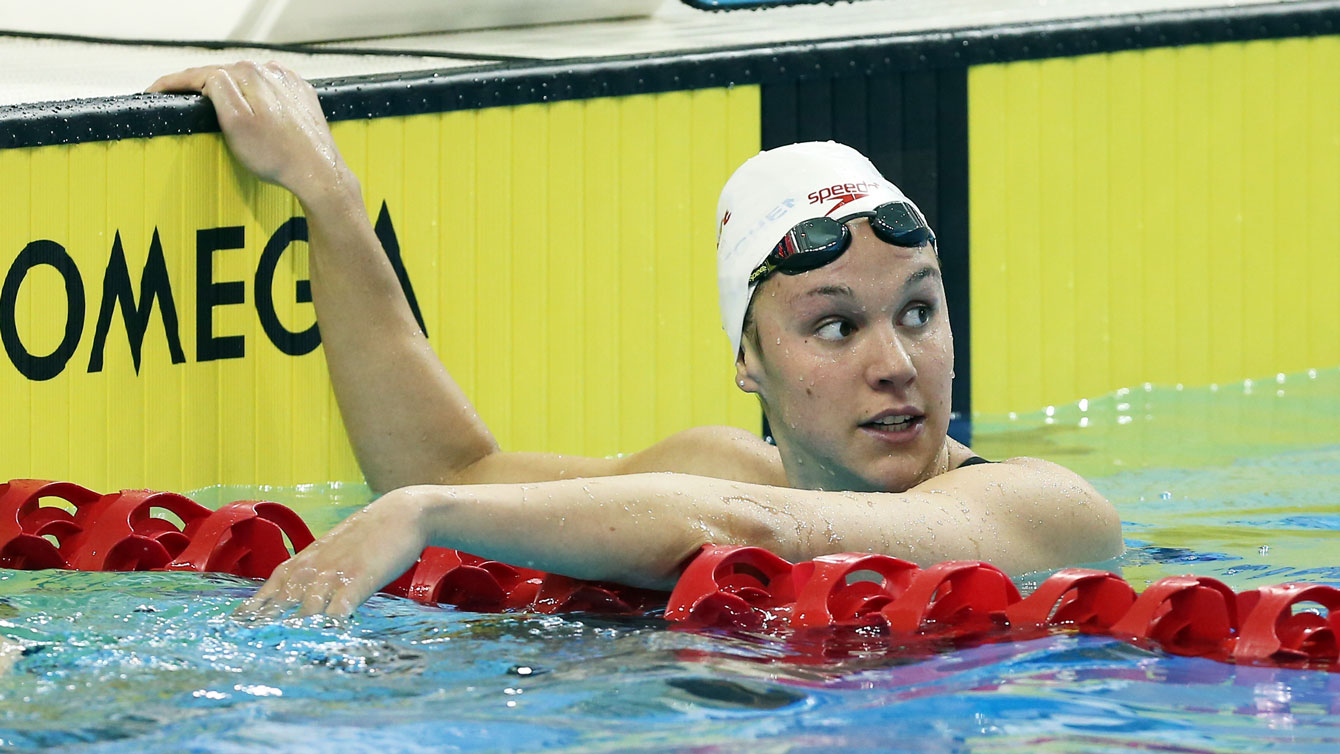 Along with her second Canadian record of the week, following her earlier victory in the 100m butterfly, Oleksiak now holds the world junior record and is ranked fifth in the world in the 100m freestyle this year.

While Oleksiak and Van Landeghem qualify for the 100m freestyle at Rio 2016, all four women who train together at the Swimming Canada High Performance Centre – Ontario will compete in the 4x100m freestyle relay.

“Getting to go with the three girls I train with every day, they helped me so much, they really pulled me through that race,” said Oleksiak. “For sure that’s going to help the relay team. We all know each other really well and we corroborate really well. We’re very strong as a team.” 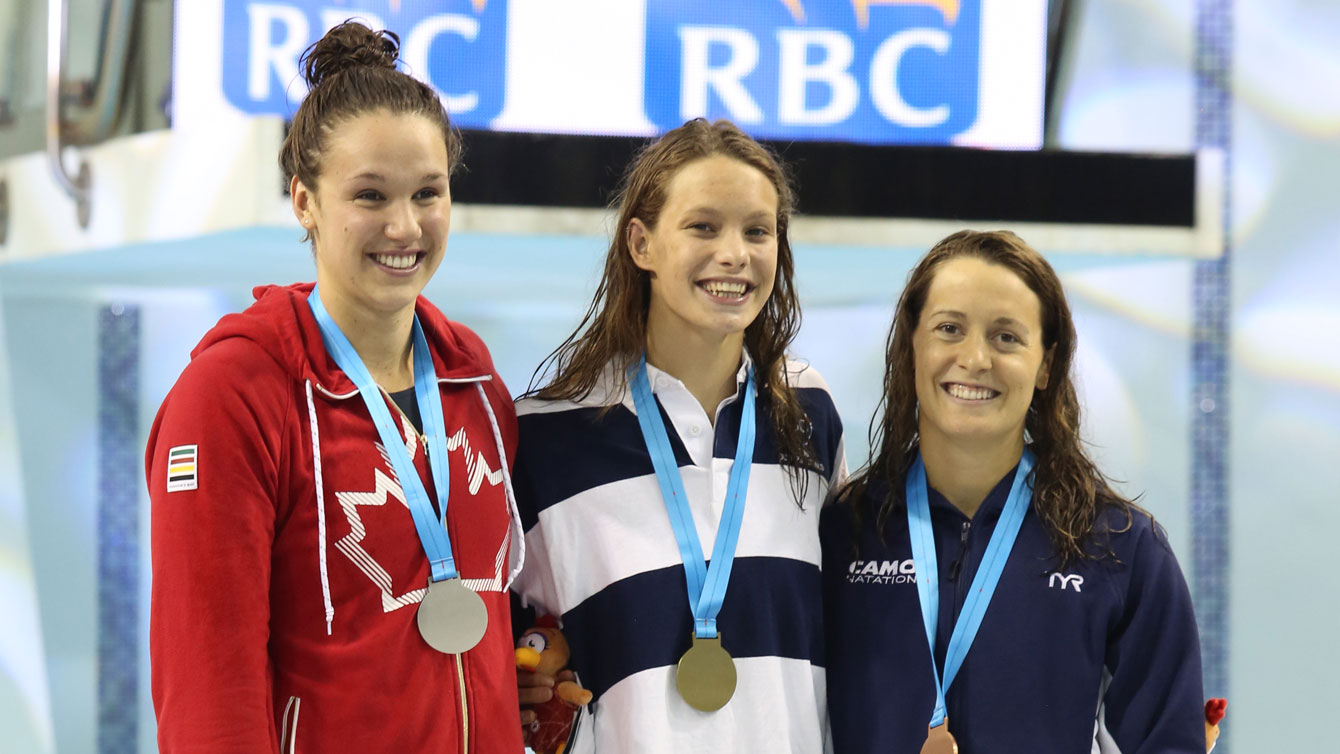 “It’s so exciting to have four girls qualify 54 seconds or faster,” said Van Landeghem. “That’s huge. It’s very exciting for Rio. I think we could do something very big there in the summer. It’s going to be phenomenal. We’re only going to get faster from here on out.”

The 6’1” (and still growing) Oleksiak, whose older brother Jamie is a defenceman with the NHL’s Dallas Stars, has now qualified for five events and is likely to be part of the 4x100m medley relay as well. For Van Landeghem, the result is sweet redemption after she missed the London 2012 team by a hundredth of a second in the 50m freestyle, the event in which she was fifth at last year’s world championships. She was brought to tears when she realized her father had surprised her by travelling from Winnipeg to see her compete in Toronto.

Brittany MacLean came close to her third national record this week, finishing just 1.38 seconds shy of her own mark in the 800m freestyle. Clearly the queen of the distance freestyle events in Canada, MacLean had already broken the Canadian records in the 200m and 400m. Add in the 4x200m freestyle relay and she’s in for four events in Rio.

“This meet is a great way to practice for that,” said MacLean. “I swam the same amount of races. Hopefully I’ll get some second swims in Rio. It’s a good way to practice what to expect this summer. I think the best motivation – what I learned (from) London when I made it – I don’t want to just go to the Olympics. I want to do something special at the Olympics.”

As the race went on, MacLean just kept increasing her lead on the field, making it increasingly difficult for cameras to keep her and the rest of the swimmers in the same frame. At the end, her time of 8:21.40 was almost 17 seconds faster than anyone else and ranks her third in the world this year. 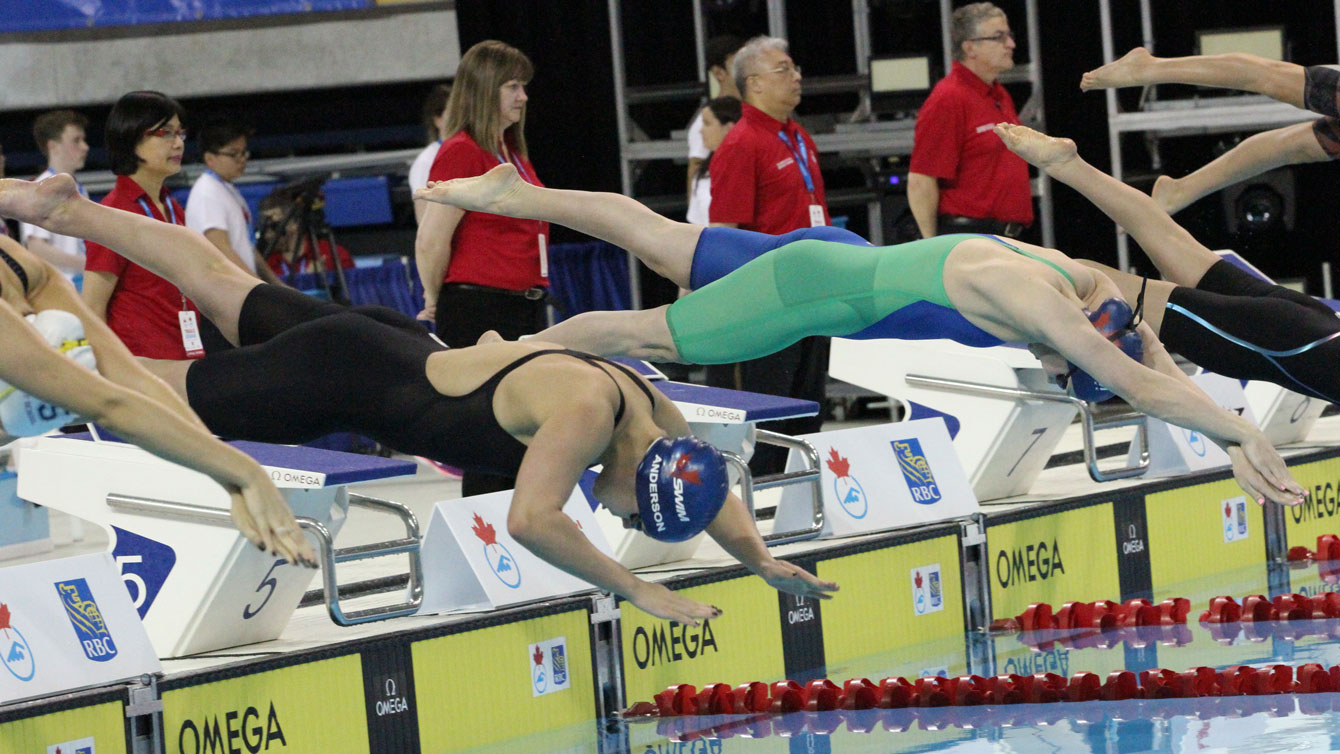 “I assumed with the crowd noise I was probably close to the Canadian record, but I mean all I can do right now is do my best… for now it’s a good starting point.”

Canada’s 200m breaststroke gold-silver punch from the Pan Am Games also locked up their Olympic spots. Kierra Smith took the victory in 2:23.91, giving her a second individual event after her win in the 100m breaststroke.

She had been neck-and-neck with Martha McCabe at the three-quarter mark. The 2011 World bronze medallist finished in 2:25.13 to make her second Olympic team.

“This is the weirdest feeling I’ve ever had after a race,” said McCabe. “It’s out of body, it’s really weird. I can’t explain it and I’ve never had that before. I think it was really hard for me to wait, to be in Toronto and wait and my family is all here. Even the whole time I was in the water (after the race) talking to Kierra ‘Did I make it? Are you sure I made it?’” 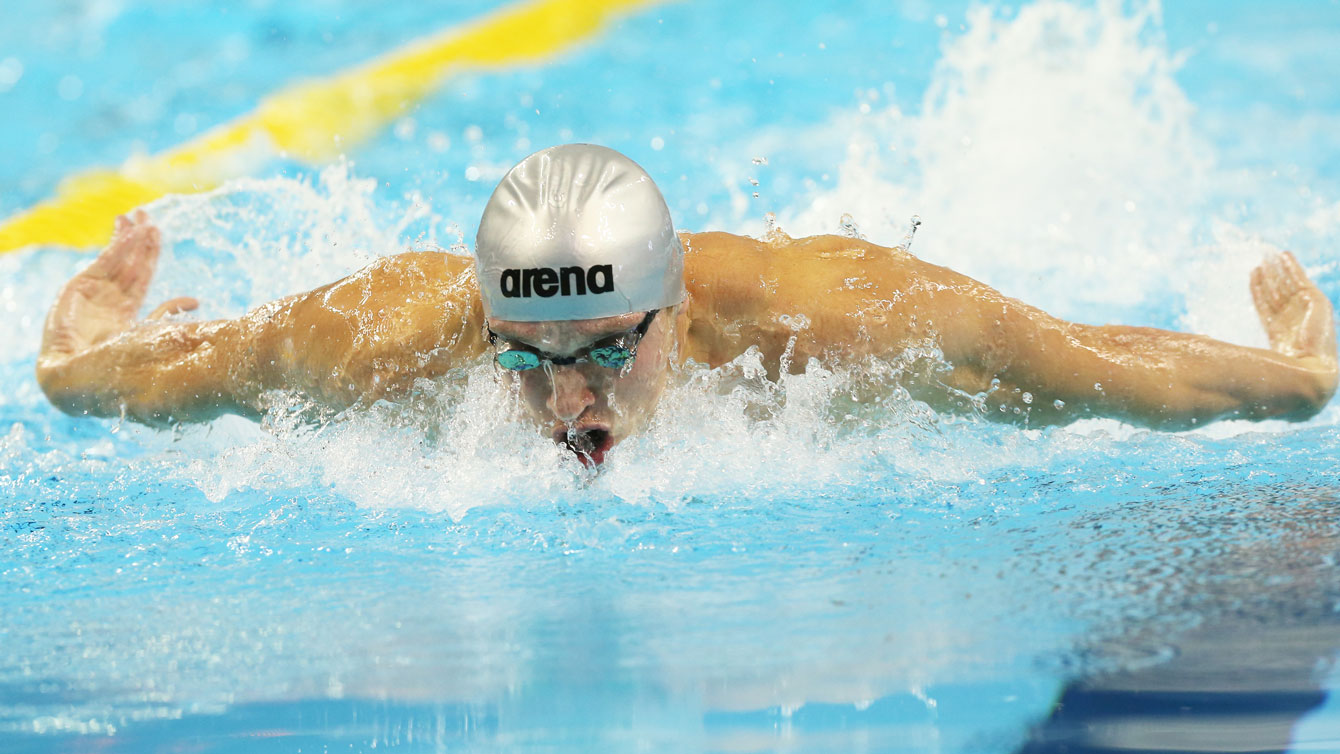 Santo Condorelli in the preliminaries of the men’s 100m butterfly at Rio Trials on April 9, 2016 (Photo: Scott Grant via Swimming Canada).

It was a tough night for the Canadian men. Jeremie Dezwirek came just 0.09 short of the Olympic Qualifying Time (1:58.22) in the 200m backstroke. Santo Condorelli was disqualified in the prelims of the 100m butterfly because of a bad turn. Already on the Olympic team in the 100m freestyle, he’ll have to wait to see whether he will be named to start in the butterfly event in Rio in the absence of another qualifier.

The Trials come to an end on Sunday, culminating in the official nomination of Canada’s swimming team for Rio 2016. 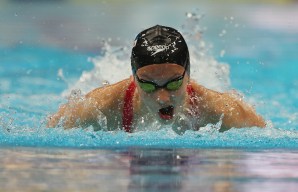