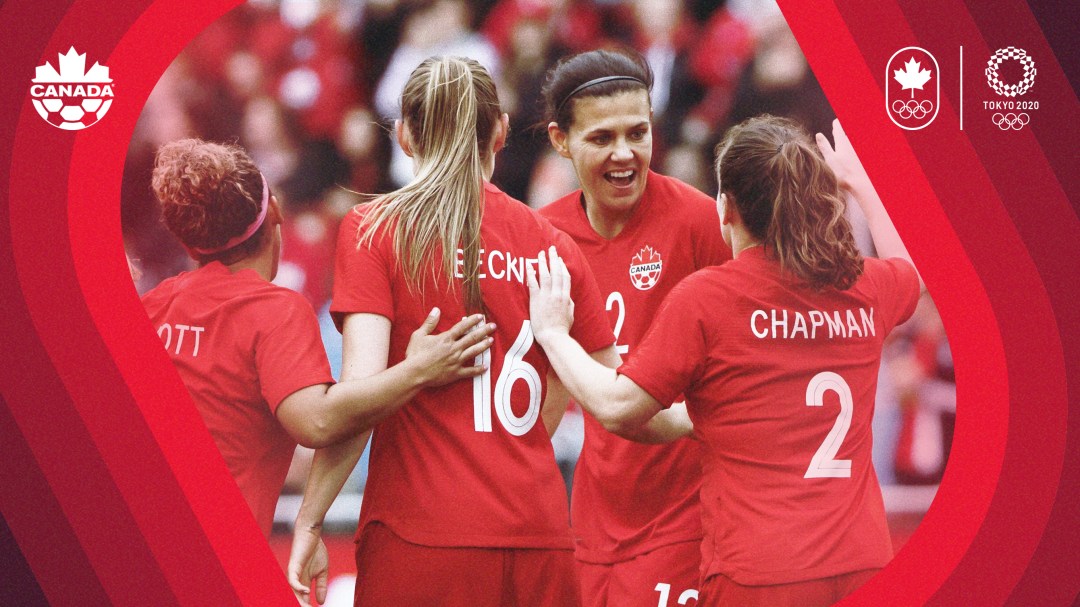 Team Canada will be going for a third straight Olympic medal in women’s soccer this summer.

The roster includes 12 members of the bronze medal-winning team from Rio 2016 and two players who won bronze at London 2012.

The team will be led by Christine Sinclair, who will be competing in her fourth Olympic Games. After debuting at Beijing 2008, she was a key contributor to the back-to-back bronze medals at London 2012 and Rio 2016.

Sinclair is Canada’s most successful soccer player ever and will once again wear the captain’s armband. She put her name into the history books in January 2020 when she scored her 185th international goal – the most ever by any player – during the Concacaf Women’s Olympic Qualifying Tournament. She currently sits on 186 goals.

At the end of 2020, Sinclair was named Canada’s Female Athlete of the Year by the Canadian Press. She previously won that same Rosenfeld Award as well as the Lou Marsh Award as Canada’s Athlete of the Year in 2012 after leading Canada to Olympic bronze. She was selected as Team Canada’s Closing Ceremony flag bearer at London 2012.

Desiree Scott is the other two-time Olympic medallist on the team. At London 2012 she played every minute of Canada’s six matches. She was similarly impactful at Rio 2016, playing all except 16 minutes of Canada’s six games. She now has more than 160 senior international appearances for Canada.

Among the other returnees from Rio 2016 are Kadeisha Buchanan, Stephanie Labbé, and Quinn.

In 2020, Buchanan took home her fourth Champions League title with her pro club Olympique Lyon of the Division 1 Féminine. Over the last six years, the defender has been named the Canadian Player of the Year three times, winning the award in 2015, 2017 and 2020 for her on-field efforts.

Labbé will be guarding the net for her second straight Games. In her Olympic debut in Rio, Labbé started five of Canada’s six games, allowing just four goals. She won the Golden Glove Award at the Concacaf Olympic Qualifier and started all four of Canada’s games at the 2019 FIFA Women’s World Cup.

Quinn was the highest-drafted Canadian in the NWSL when they were selected third overall by the Washington Spirit in 2018. They will make more history at Tokyo 2020 as one of the first openly transgender athletes to compete at the Olympic Games. They came out publicly in 2020 to be more visible and hopefully open the door to Olympic participation for more transgender athletes.

With just seven caps, Viens is an even newer face on the senior national team. She made her international debut in February 2021 at the SheBelieves Cup. She was named Canada Soccer Player of the Month for April 2021 after scoring her first goals with the team in friendlies against Wales and England.

Sixteen members of the Olympic team suited up for Canada at the 2019 FIFA Women’s World Cup in France where the team earned a 2-1 record in the group stage with wins against New Zealand and Cameroon before falling to Sweden in the Round of 16.

Canada booked its ticket to Tokyo 2020 by advancing to the final at the Concacaf Olympic Qualifying Tournament in February 2020, where they were the runners-up to the United States. Sixteen members of the Olympic team were part of that qualification process.

After no on-field action for almost a year due to the COVID-19 pandemic, some team members competed at the SheBelieves Cup in February 2021. In April, there were international friendlies against Wales and England, with Canada winning both matches. More international friendlies followed against the Czech Republic and Brazil in mid-June, with both games ending in 0-0 draws.

At Tokyo 2020, Canada will start in Group E alongside host country Japan, Great Britain and Chile. Canada’s first match will be against Japan on July 21, followed by Chile on July 24 and Great Britain on July 27.