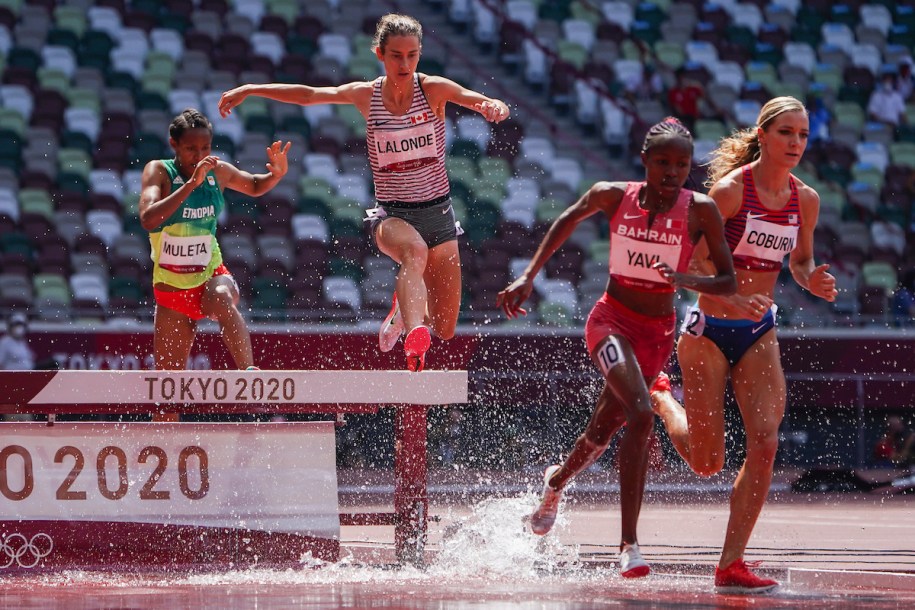 It was another hot and humid day inside the Olympic Stadium for day three of athletics. Geneviève Lalonde used that to her advantage, bringing the heat onto the track for the women’s 3000m steeplechase as she broke the Canadian record with a time of 9:22.64.

“I’m very, very happy,” said Lalonde, who took nearly five seconds off the national mark. “Once I stepped out on the line, I knew that it was going to be something special.”

At her second Olympic Games, Lalonde added, “I’ve got so much support back home, helping me out. The Canadian public and community, I honestly feel so humbled to be able to represent them and every time I step out into the stadium; the lights come on and I’m ready to go.”

Lalonde will advance into the final on Thursday while Alycia Butterworth (9:34.24) and Regan Yee (9:41.14), who set the old Canadian record at the Olympic Trials in late June, will not advance past their Olympic debuts.

In the women’s hammer throw, Camryn Rogers didn’t waste any time, needing only her first throw to qualify for the final, throwing past the qualifying mark of 73.50, with her throw of 73.97m. Jillian Weir, throwing 68.68m, will not advance.

“I stepped into the circle for the first time and took my first [warm up] throw and just thought to myself, ‘You know what, I think it’s going to be a good day, you can do this,’” said Rogers, who is making her Olympic debut. “When you have your first throw and it’s good, it’s stable, and it’s together, it gives you that little boost of confidence.”

Christabel Nettey was on the runway for the women’s long jump, capping off her competition with a third attempt mark of 6.29m, but will not advance into the final. In the men’s 800-metre semifinal, Marco Arop finished seventh in his heat and will not advance while Django Lovett cleared 2.30m, finishing in eight place overall in the men’s high jump final.

“I’m grateful for the Japanese people for hosting these events, and taking on this burden for the rest of the world,” said Lovett, thanking the host country Japan for these Olympic Games. “It has truly been a gift for everyone, and I hope the world recognizes it and we owe a debt of gratitude to the Japanese people.”