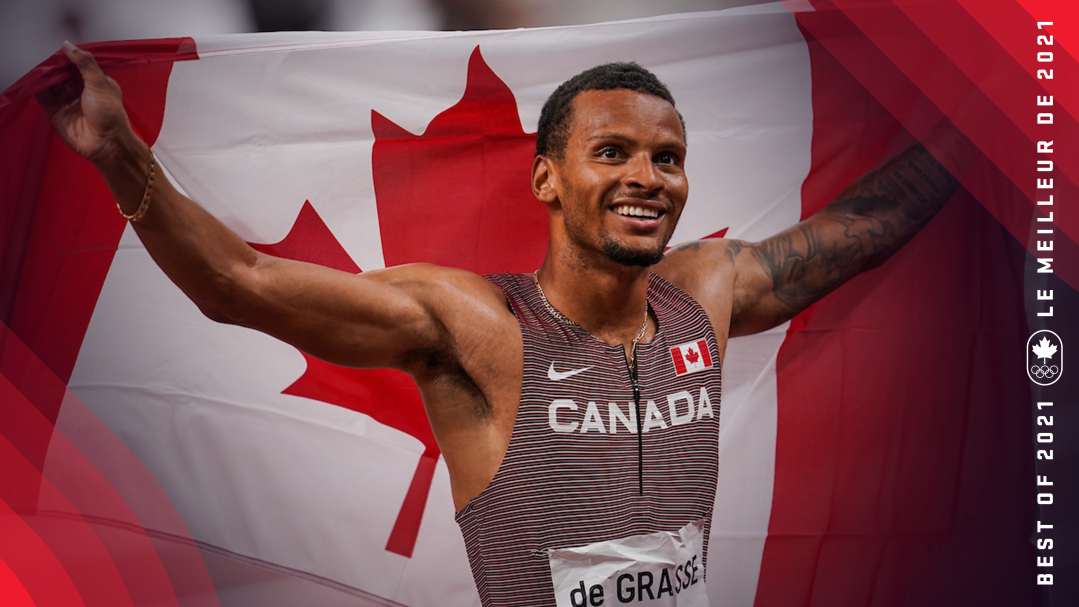 Two Olympic appearances and not a single podium missed.

Andre De Grasse continued his run of success on the track at Tokyo 2020 and became Canada’s most decorated male Olympian in the process as he went three-for-three in Tokyo, just as he did at Rio 2016.

Here’s a recap of de Grasse’s record-setting Olympic performances from this summer:

Andre De Grasse won gold in the 200m sprint and set a national record time of 19.62 seconds in the process. The gold was Canada’s first in the 200m since Amsterdam 1928 and the first gold medal of De Grasse’s Olympic career.

Just a few days earlier, De Grasse ran a personal best time of 9.89 seconds to claim bronze in the 100m for a second straight Olympics. He became the first Canadian to win multiple Olympic medals in the 100m.

READ: Tokyo 2020 about growth and redemption for Team Canada athletics

Towards the end of the Games, Canada won its second straight Olympic medal in the men’s 4x100m relay, taking bronze in 37.70 seconds. The team included Aaron Brown, Jerome Blake, Brendon Rodney, and was anchored by De Grasse.

De Grasse’s perfect track record at the Olympics has helped Canada reemerge as an athletics powerhouse. He made sure to mention Canada’s male sprinters are hungry for more at Paris 2024.

“We’ll be back and I feel like we’ll be an even better team,” De Grasse added. “I feel like we can bite the national record. We have three other fast guys here.”