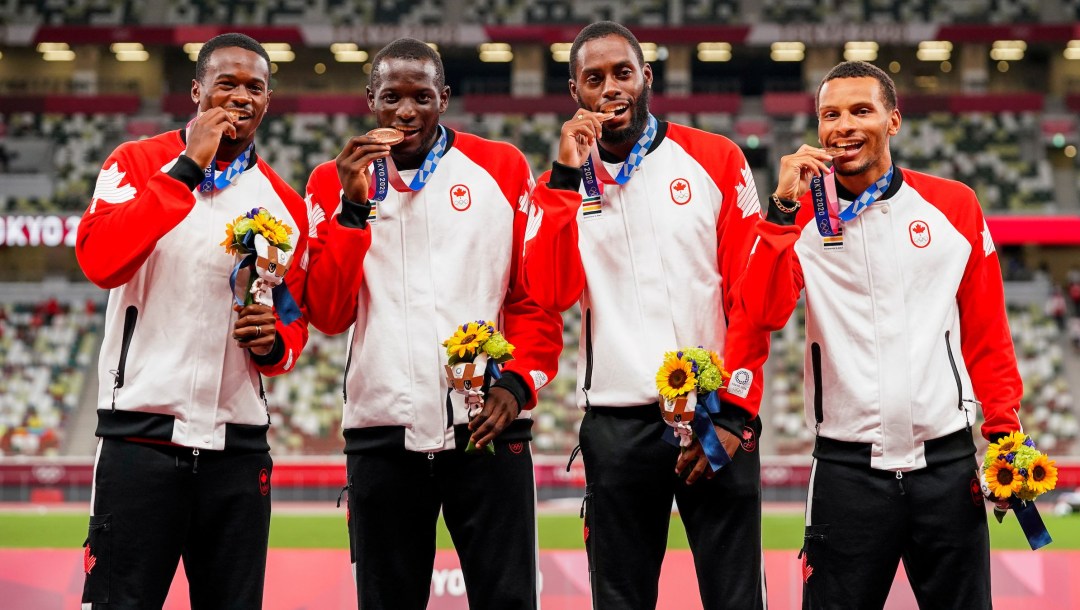 It was as hot and humid as predicted for the Tokyo 2020 athletics competition, but Canada came prepared and brought some of the heat onto the podium.

After 10 days of competition, Canada will conclude the Olympic Games with six medals (two gold, one silver, three bronze) in athletics, matching their total from Rio 2016. Andre De Grasse led the way, stepping onto the podium three times inside Olympic Stadium. He has never failed to medal in an Olympic event in his career and hopes to continue that momentum with Paris 2024 just three years away.

But before we start thinking about the future, let’s acknowledge some of the most outstanding performances, achievements and debuts from Canadian athletics we saw over the last week and a half in Japan.

Entering Tokyo 2020, De Grasse had become synonymous with Canadian athletics and a household name in the sport. After earning another three medals, De Grasse brought his to career Olympic medal count to six, trailing only swimming phenom Penny Oleksiak, who won her Canadian all-time-leading seventh Olympic medal at these Games.

In addition to his gold medal in the 200m, De Grasse will depart Tokyo with two bronze medals from the 100m and 4x100m relay.

At his third Olympic Games, Damian Warner gave the decathlon everything he had to achieve the dream of celebrating atop the Olympic podium.

Competing in the grueling two-day event consisting of 10 different events, Warner grabbed the lead right from the start and never looked back. In a field of his own, he set Olympic decathlon bests in the 100m (10.12 seconds), 110m hurdles (13.46 seconds), and long jump (8.24m) and became just the fourth decathlete to surpass the 9000-point mark with 9018, breaking the Olympic record last held by American Ashton Eaton. Warner also becomes the first Canadian Olympic decathlon champion.

She won’t have a medal from her Tokyo 2020 experience but Geneviève Lalonde will be leaving happy after her performance in the women’s 3000m steeplechase. After seeing her Canadian record broken by teammate Regan Yee earlier this year, Lalonde knew there was ‘something special’ standing on the start line of the semifinal. Nine minutes 22.64 seconds later, Lalonde reclaimed her Canadian record, taking nearly five seconds off the national record and seven seconds off her personal best.

She wasn’t done there, as she qualified for the final and once again, lowering her record to 9:22.40 to finish a Canadian best ever 11th in the women’s 3000m steeplechase.

You can see it on his face, every time he runs, Mohammed Ahmed is a fighter. After getting athletics started for Canada in the 10,000m final, where he finished sixth, Ahmed wouldn’t let the opportunity in the 5000m pass him as his smooth running and final kick at the bell lap saw him climb to the silver medal spot on the podium.

As the 2019 World bronze medallist and holding the world’s third-fastest time this season heading into Tokyo 2020, Ahmed improved on his fourth-place finish from Rio 2016 to win Canada’s first Olympic medal in a men’s long distance track event.

Heading up to Sapporo, Evan Dunfee could not have written a better send off for the longest Olympic race walking event. He clocked a time of 3:50:59 to earn his first Olympic medal in the men’s 50km race walk.

Thinking of his friends, family, and the words of his nanna, Dunfee was ‘over the moon’ as he charged down the last few metres to claim his Olympic bronze medal.

Racing in hot and humid conditions around the Sapporo Odori Park, his bronze medal is Canada’s first Olympic medal in the 50km race walk, improving on his fourth place finish from Rio 2016.

Sixteen years after her Olympic debut at Athens 2004, Malindi Elmore made her return to the Olympic Games at Tokyo 2020.

Trading in her 1500m spikes for marathon shoes, Elmore finished ninth in the women’s marathon, clocking 2:30:59. She was the top Canadian in the race, ahead of Natasha Wodak (13th) and Dayna Pidhoresky (73rd).

After failing to qualify for the 2008 and 2012 Olympics, Elmore hung up the track spikes and walked away from the sport. But after her first marathon in 2019, the fire was reignited and the comeback was on. Two years later, she recorded the second-best Canadian Olympic result ever in the women’s marathon.

The Canadian squad of Aaron Brown, Jerome Blake, Brendon Rodney, and De Grasse claimed a second straight Olympic bronze medal for Canada in the men’s 4x100m relay. Proud of their moments and accomplishments, the sprinters vow to be stronger and faster in Paris 2024 in hopes of changing the colour of the medal, a mantra that certainly worked for the women’s soccer team.

Canada had a number of athletes making their Olympic debuts in Tokyo, proving they belonged among the world’s best.

Camryn Rogers had an incredible performance in the women’s hammer throw, only needing one throw to qualify for the final, where she finished in fifth place, easily a Canadian best-ever result.

Justyn Knight went stride for stride with the Olympic men’s 5000m field, finishing third in the first round heats before crossing the finish line in the final with a time 13:04.38 for seventh place.

After clearing 2.28m in qualifying, Django Lovett contained the pressure of being the only Canadian in the high jump final. His 2.30m height landed him in eighth overall.

The women’s 4x400m relay squad consisting of Alicia Brown, Madeline Price, Kyra Constantine, and Sage Watson may have repeated their fourth place finish from Rio 2016, but the team improved their time from 3:26.43, lowering it to a season-best time of 3:21.84. The team will look to take the next step in Paris 2024.