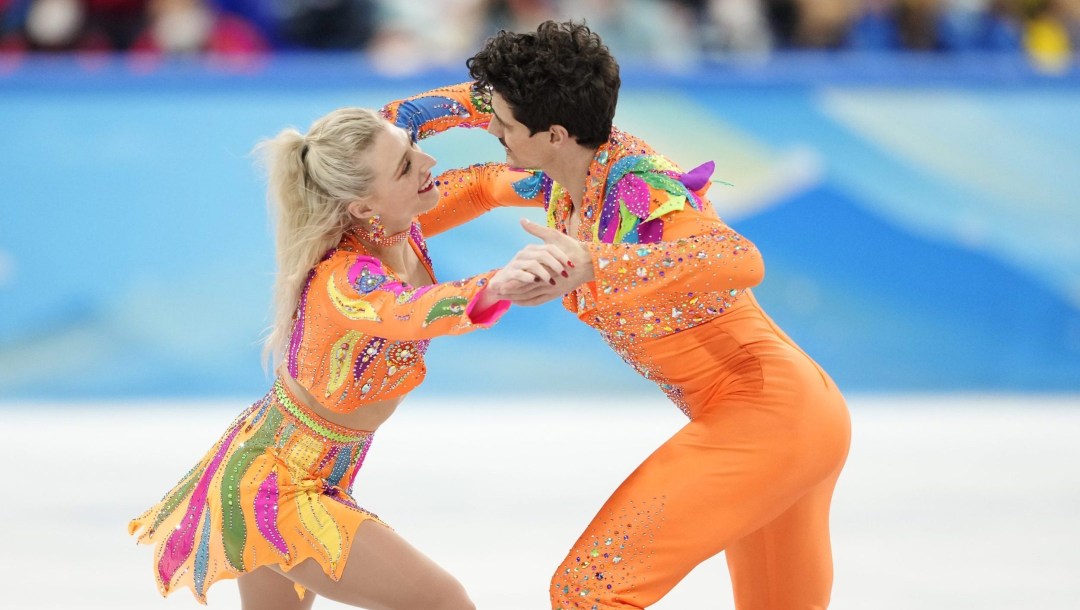 After the first day of the figure skating team event at Beijing 2022, Canada sits in sixth place, two points behind Italy for the cutoff to advance to the free skates.

Canada accumulated 16 points based on the results from the men’s and pairs’ short programs and the rhythm dance. The women’s short program will take place on Sunday morning in Beijing (Saturday night in Canada).

Roman Sadovsky was the first Canadian to take to the ice at the Capital Indoor Stadium. Coming into the Games, it was expected that reigning national champion Keegan Messing would skate in the team event, but he has been delayed getting to Beijing while awaiting a negative COVID-19 test that will allow him to travel. Sadovsky had stepped up in September to earn Canada a second men’s Olympic spot and then claimed that for himself with his silver medal at the national championships in January.

In his first Olympic appearance, Sadovsky had a tough start, turning a planned quad salchow into a triple. He landed a beauty of a triple axel but then had some difficulties with the required combo and was only able to tack a double toe onto his triple lutz. Sadovsky scored 71.06 points to finish in eighth place, giving Canada three points toward the team score.

“Overall, I am pretty disappointed. I made some uncharacteristic mistakes. I don’t necessarily miss that many quad (salchows). There were some weird moments out there,” said Sadovsky, who also noted how great the energy was that he felt from his teammates in the kiss and cry.

Next up was the rhythm dance. Reigning world bronze medallists Piper Gilles and Paul Poirier had a strong performance, but did not achieve the levels on all of their technical elements that they would have liked. Their twizzles and required Midnight Blues sequence were both scored at level three rather than the top level of four. Their midline step sequence went in as a level two.

Gilles and Poirier totalled 82.72 points for their rhythm dance, but the technical elements score was the difference in ranking them fourth behind Italy’s Charlene Guignard and Marbo Fabri. That added seven points to Canada’s team score.

“We are really pleased with out performance today,” said Poirier. “It’s our first time getting back competing on Olympic ice. That is a really big deal for any athlete, so we’re really happy to have the team event together.”

The day concluded with the pairs’ short programs. Three-time national champions Kirsten Moore-Towers and Michael Marinaro got the nod for Canada. Moore-Towers had some slight issues with her solo triple toe loop but made a great effort to get the landing on the throw triple loop. They scored 67.34 points, a season’s best for them after a disappointing fall on the Grand Prix series. That ranked them fifth, adding six points to Canada’s team score.

The United States currently leads with 28 points. Nathan Chen topped the men’s event while Madison Hubbell and Zachary Donohue were first in the ice dance. Alexa Knierem and Brandon Frazier were third in the pairs. The Russian Olympic Committee is second with 26 points, followed by China with 21 points. Japan has 20 points and Italy has 18. Just behind Canada in seventh place is Georgia with 15 points.

Madeline Schizas will make her Olympic debut as Canada’s entry in the women’s short program. She finished 13th in her first world championships in 2021. Italy will be represented by Lara Naki Gutmann, who did not qualify for the individual women’s singles event. Anastasiaa Gubanova will skate for Georgia. She finished seventh at the European Championships — her first major senior international event — in January.

That will be followed immediately by the men’s free skates with only the top five countries competing. The free programs for the pairs, ice dance and women will take place on Monday morning in Beijing (Sunday night in Canada).