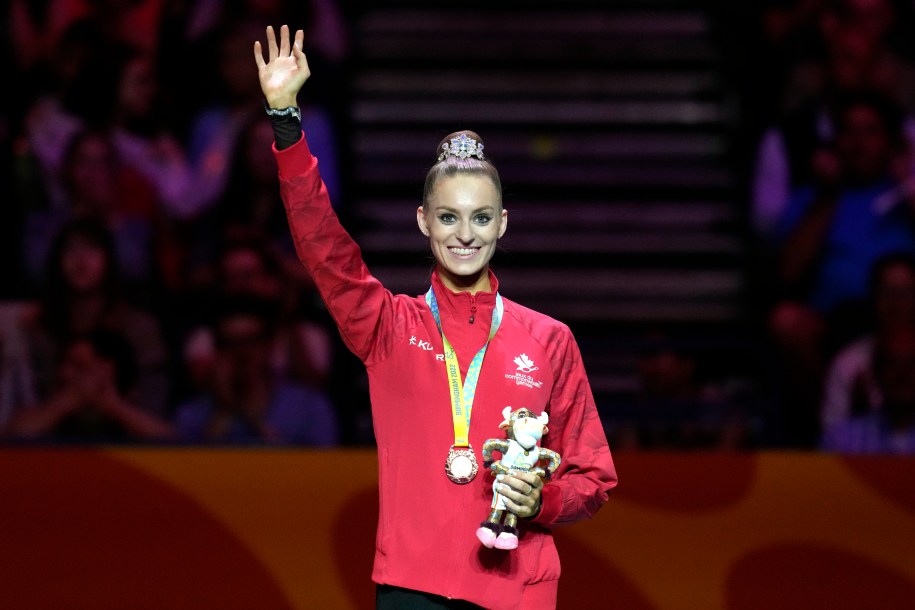 Canada is third in the standings with 84 medals at the end of Day 9 of the 2022 Commonwealth Games in Birmingham, England.

The 23-year-old qualified for the final on Thursday where she set a Games record of 74.68m. In the final, Rogers’ third throw of 74.08m secured her the top spot on the podium, where she stood with fellow Canadian Jillian Weir who captured bronze after throwing 67.35m. Julia Ratcliffe of New Zealand claimed the silver, throwing 69.69m.

On the men’s side of hammer throw, Ethan Katzberg won silver with a powerful 76.36m throw. Nick Millet of England took first place by just a tenth of a second (76.43) and Alexandros Poursanidis of Cyprus slid into the third position after scoring 73.97. Adam Keenan (72.36) and Rowan Hamilton (67.76) finished fifth and ninth.

Margot Claure Erlam and Mia Vallée captured Team Canada’s first medal on Day 9. Vallée and Erlam won bronze in the women’s synchronized 3m springboard with a total of 297.00 points. They stood on the podium with Australia (316.53) and Malaysia (299.85) who placed first and second respectively. Caeli McKay and Celina Toth took fifth place.

Suzanna Shahbazian won silver on ball with a score of 29.050. Joe Ee NG from Malaysia (29.700) and Anna Sokolova from Cyprus (28.800) took first and third place. Carmel Kallemaa won silver (29.100) in the clubs event. She was edged out by Australian Alexandra Kiroi-Bogatyreva (29.400). Izzah Binti Amzan of Malaysia completed the podium (28.600) in the bronze position.

Both the Team Canada men and women will play for the gold medal after two outstanding performances today.

The men’s team, Sam Schachter and Daniel Dearing played three competitive sets against England’s Javier and Joaquin Bello (15-21, 21-13, 15-7). Schachter and Dearing were able to conquer the Bello twins, and they will play for the gold medal.

In Badminton, Michelle Li advances to the semi-finals after a 2-0 win over Rachael Darragh of Northern Ireland.

Priyanka Dhillon achieved bronze medal in the women’s 48 kg, after falling to her opponent India’s Nitu Ghanghas in the semi-finals.