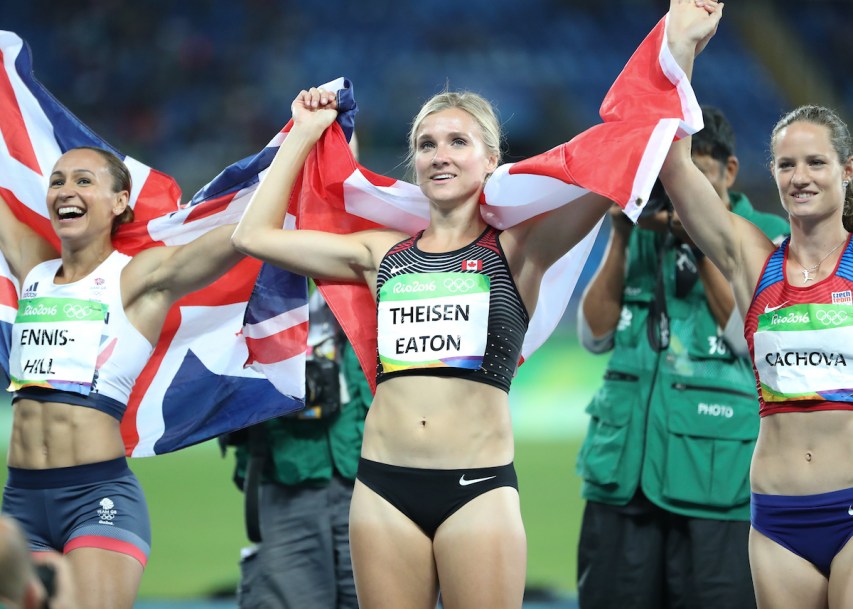 Canada has quite the track record when it comes to athletics at the Olympic Games. With the sport set to get underway at Tokyo 2020, we look back at five great Olympic Games for Canadian track and field.

57 years ago, when the Games were last in Tokyo, it was Bill Crothers earning a silver in the 800m and Harry Jerome claiming bronze in the 100m who made the headlines for Canada.

Those are among the total of 60 athletics medals Canada has won at the Olympic Games, the most for the country in an Olympic sport. With this year’s Canadian team being arguably one of the deepest and most complete teams Canada has ever sent to the Games, more medal moments could be on their way.

Although Canadians had been winning medals for years, starting with George Orton at Paris 1900, it was Amsterdam 1928 that set the bar for what we could expect from Canadian track and field at the Olympic Games.

With a total of eight podiums in Amsterdam, medals by Ethel Catherwood (women’s high jump gold), Percy Williams (100m gold, 200m gold), and the women’s 4x100m relay (gold) still stand as the best finishes for Canadian athletes in their respective events. The Matchless Six, the nickname given to the outstanding women’s team, also included Bobbie Rosenfeld and Ethel Smith who won silver and bronze in the women’s 100m.

Canadians would soon find out that there’s something about the Los Angeles sun that showcased the talent on Team Canada in athletics. In hindsight, with the city hosting the Games twice, it’s natural to see that the 1932 Olympic Games saw a handful of Canadians double up on the podium.

Hilda Strike struck silver not once, but twice, finishing second in the women’s 100m final before joining the women’s 4x100m relay team.

Phil Edwards (two bronze) and Alex Wilson (one silver and one bronze) landed on the podium in their individual events twice, but eventually teamed up for the men’s 4x400m relay where they collected a third medal from the City of Angels.

In total, Team Canada earned nine medals in athletics in 1932, which still stands as the most won in a single Games.

Fast-forward to Los Angeles 1984 and Team Canada had some performances worthy of the record books.

In the women’s 400m event, Marita Payne set a Canadian record (49.91 seconds) that has remained in the record book to this day. It wasn’t enough for her to win an individual medal, but she made up for it, not once, but twice before the Closing Ceremony.

Charmaine Crooks, Molly Killingbeck, Jillian Richardson, and Payne teamed up to become one of the most legendary relay teams Canada has put together. Their silver medal winning time of 3:21.21 is unmatched in Athletics Canada’s record book.

“Oh if you’re Canadian, you have to love Saturday nights in Georgia!”

What a call by the great sportscaster, Don Wittman. But how true was that statement when Donovan Bailey crossed the finish line, securing the gold medal for Canada’s 4x100m relay team at Atlanta 1996. Robert Esmie, Glenroy Gilbert, Bruny Surin, heat runner Carlton Chambers, and Bailey couldn’t have written a better story for Olympic athletics.

For Bailey, that was his second gold medal during those Games and he brought the nation out of their seats.

The Rio 2016 Olympic Games were historic for Canadian athletics, as they tallied a total of six medals, their most since the 1932, third most all-time.

It was the Andre De Grasse welcome party to the rest of the world. At 21-years-old, De Grasse collected three medals for Canada: a silver medal in the 200m and two bronze medals in the 100m and 4x100m relay (a Canadian record).

In the combined events, Brianne Theisen-Eaton (6653 points) and Damian Warner (8666 points) both earned bronze in the heptathlon and decathlon, respectively.

Last, but certainly not least, Derek Drouin jumped to the top of the world in Rio, upgrading his London 2012 bronze medal to gold and earning the title of Olympic Champion in the men’s high jump.