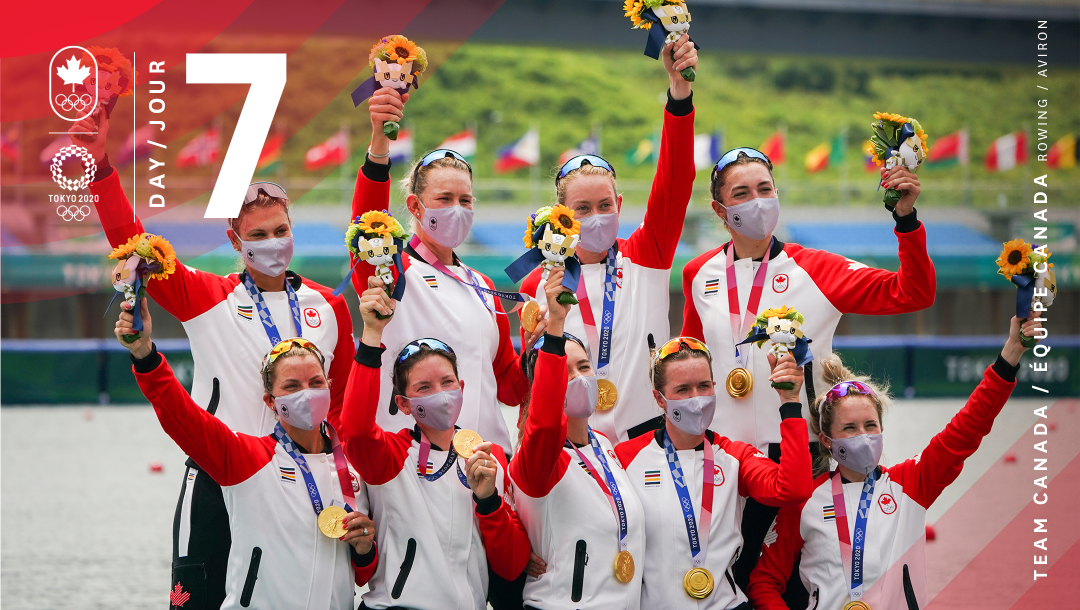 The Canadian women’s eight leads from start to finish for rowing gold, sailor Sarah Douglas has a Canadian first in her sights, Olympic champions Penny Oleksiak and Rosie MacLennan do Canada proud, and Team Canada wins in a shootout in the quarterfinals of women’s soccer.

Nearing the midway mark of Tokyo 2020, Team Canada is rolling on Day 7.

You can check out the official schedule of Canadians who compete today at the bottom of this page and read on for the details of what you’ll want to be watching for in each sport.

Canada has a crew on the podium on the final day of the Olympic rowing regatta. Coming off a Canadian best-ever time in the repechage, the women’s eight used the momentum to take the lead early in the six-boat A final and never gave it away. They become the first Canadian women to win Olympic gold in any rowing event in 25 years.

In the women’s and men’s single sculls, Carling Zeeman was second in her B final and Trevor Jones was third in his B Final to finish eighth and ninth overall.

Penny Oleksiak finished fourth in the final of very competitive women’s 100m freestyle while swimming faster than she did in winning gold in the event at Rio 2016. She broke her own Canadian record with her time of 52.59 seconds.

Kylie Masse and Taylor Ruck have both advanced to the final of the women’s 200m backstroke. Masse won her semifinal and was fourth-fastest overall while Ruck was fourth in her semifinal and seventh overall. Both were finalists at the 2019 World Championships where Masse won the bronze medal. Joshua Liendo raced in the semifinals of the men’s 100m butterfly but did not advance to the final after finishing 11th overall.

In the nighttime session, Brent Hayden made his first Olympic appearance since London 2012, and had the 8th-fastest heat in the men’s 50m freestyle (21.85 seconds). Liendo wasn’t far behind with a time of 22.03 – putting him 18th overall. Kayla Sanchez finished 8th in her heat in the women’s 50m freestyle.

Meanwhile, Canada won their heat in the women’s 4x100m medley relay with a time of 3:55.17 – edging out Team U.S.A. by 0.01 seconds. The men’s relay team finished fifth in their heat, but it was enough to advance to the finals on August 1.

Rosie MacLennan had an opportunity to win her third straight Olympic medal, but finished just off the podium in fourth place. Considering that just six weeks ago she was on crutches in a boot, MacLennan said afterwards: “The fact I was able to get here, compete, represent Canada in the sport that I love and do as well as I did, I know I have to be happy with that.” Teammate Samantha Smith finished 14th in her Olympic debut.

Drew Mechielsen had a Canadian best ever performance in her Olympic debut as she advanced to the final of the women’s BMX race where she finished eighth.

Athletics got underway with preliminary round action on the track and on the field. In his Olympic debut, John Gay ran a personal best time of 8:16.99 to join veteran Matt Hughes, who ran a season best 8:13.56 in qualifying for the men’s 3000m steeplechase final. Khamica Bingham and Crystal Emmanuel cruised through the women’s 100m heats, with both qualifying for the quarterfinal round.

Django Lovett was all business in the men’s high jump, not missing on a single attempt on his way to clearing 2.28m to advance to the final, tying him with the top qualifiers. Michael Mason cleared 2.25m, but it was not enough for the four-time Olympian to move on.

It was unfortunately not the day for Canada’s women’s 800m trio as Melissa Bishop-Nriagu, Lindsey Butterworth, and Madeleine Kelly did not advance past the preliminary round.

Mohammed Ahmed showed how hungry he was for the Olympic podium in the afternoon session of athletics. Sticking with the group in the early stages of the men’s 10,000-metre race, Ahmed made his move to the front of the pack with five laps to go. Putting up an inspirational run in the Tokyo heat, found a gap out of the pack, charging ahead to lead with 600-metres to go, but was not enough as he finished in 6th place. He finishes with a season-best time of 24:47.76 and will have another shot at the podium in the men’s 5,000-metre race.

Andrea Seccafien ran 14:59.55 to finish 10th in her women’s 5000m heat, but the time was enough to advance her into the final. Julie-Anne Staehli and Kate Van Buskirk did not move on. Brittany Crew and Sarah Mitton were also unable to advance from the women’s shot put qualification.

Goalkeeper Stephanie Labbé was the hero as Canada prevailed over Brazil in a penalty shootout to reach the semifinals in women’s soccer. The quarterfinal match ended 0-0 after extra time, but Labbé saved two Brazilian kicks in the shootout as Canada won 4-3. Canada will face the United States in the semifinal (Monday, 4 a.m. ET), as the team pursues a third consecutive trip to the Olympic podium.

Sarah Douglas had an impressive day in the Laser Radial as they finished their 10-race opening series. She was fourth in race nine and second in race 10 to move up to fourth overall heading into the Medal Race on Day 9. Just three points behind third place, she’s got her sights on being the first Canadian woman to win an Olympic medal in sailing.

After opening the tournament with a win and a loss, Team Canada fell 31-0 to France in their first game of the day. The loss meant Canada would need to have some results go their way in order to reach the quarterfinals, but New Zealand’s 33-0 victory over the ROC pushed the Canadians into the 9-12 placing game. Canada defeated Brazil 45-0 and will now play Kenya to determine ninth and 10th place.

Jennifer Abel and Pamela Ware competed in the preliminary round of the women’s 3m springboard. They finished third and fourth, respectively, as they are among the top 18 that advance to the semifinal.

It’s the first day of eventing, which starts with dressage. Colleen Loach and Qorry Blue D’Argouges competed in the first session, finishing 20th among that group. Unfortunately, Jessica Phoenix had to withdraw due to an injury sustained by her horse, Pavarotti.

Corey Conners and Mackenzie Hughes started round two six strokes behind the leader. Only Hughes managed to finish his second round before play was suspended due to inclement weather. He shot a 72 to sit one-under par in a tie for 39th. Conners has two holes to play in his second round and sits in a tie for 34th at two-under par.

The Red Caribou played to a 4-4 draw against South Africa, earning a point in their final match of Tokyo 2020. Canada fell behind 2-0 in the first quarter but the team quickly tied it up with goals from Mark Pearson in the 11th minute and Keegan Pereira in the 17th minute. The teams traded goals from there in what proved to be a back-and-forth match. John Boothroyd and Gabriel Ho-Garcia scored Canada’s other goals.

Lynda Kiejko continued in the women’s 25m pistol with the qualification rapid round, after the precision qualification took place on Day 6. She finished 42nd overall.

Canada cruised past Venezuela 3-0 (25-13, 25-22, 25-12) to win their second straight match and even their record at 2-2. Like in their win over Iran, Canada got off to a good start and utilized solid defensive play to pick up a straight-sets victory. In their final match in Pool A action, Canada will face a stern test against Poland (Saturday, 8 p.m. ET), with a spot in the quarterfinals still up for grabs. 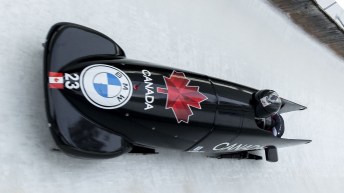