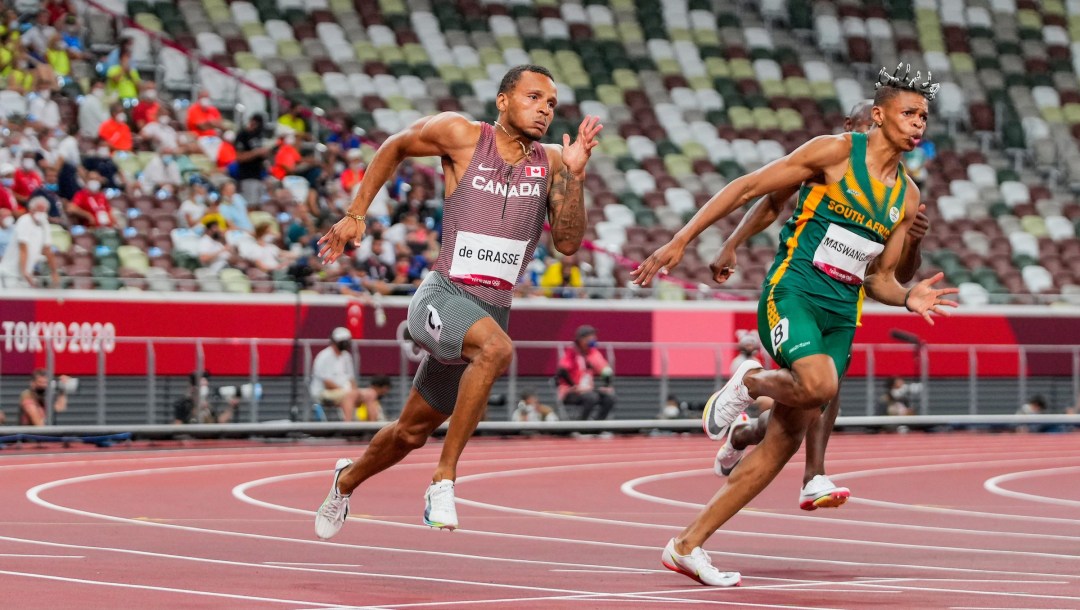 “First Olympic Games and being amongst such incredible, and talented, and experienced women, there’s always more you wish I can do but if anything, the results showed me there’s more in the tank and I’m all the more excited to build on it next year and start planning for three years down the road for Paris 2024,” she said.

“There’s a lot of good things to take away from today,” Rogers continued. “There’s always more that I can learn from and change and I think understanding both sides is really important to becoming a better athlete.”

On the track, Andre De Grasse and Aaron Brown are headed to the men’s 200m final after putting up two statement races.

Returning to Olympic Stadium after winning the bronze medal in the men’s 100m dash, De Grasse showed he still had the speed in the 200m semifinal, jogging into the finish line to stop the clock at 19.73 second, a new personal best and Canadian record, en route to tomorrow’s final.

“I broke my national record, it’s been five years since I’ve done that so it feels good that I still have my 200-metre legs in me,” said De Grasse. “I’m feeling good and ready to go for tomorrow.”

Brown, named as one of the Canadian athletics team co-captain, got his third Olympic Games underway in the men’s 200m as well. Winning his qualification heat in 20.38s, Brown booked his spot into the final after a season-best 19.99s in winning his semifinal heat.

“I got a really good start,” Brown said. “I wanted to make sure I drove to about the 50 metres or so, really setting myself off well for the corner. I just stayed relaxed and brought it home. The focus was to just qualify for the final and I did that so I’m proud.”

Brendon Rodney also raced in the morning session 200m qualification round, but did not advance with his time of 20.60s.

After a gutsy 10,000m final on the first day of athletics, Mohammed Ahmed, returned to the track for the first round of the men’s 5000m. The reigning world bronze medallist showed why he’s third-fastest in the world this year, finishing second in heat one with a time of 13:38.96 to qualify for the final.

Ahmed is focused heading into the final. “Objective was top five so I’m happy. I feel confident,” said Ahmed, staying short and sweet. “Go for a medal, to win, that’s what I want”

Rio 2016 Olympian Luc Bruchet and Justyn Knight rounded out the Canadians in the heats, with Knight joining Ahmed in the final with a time of 13:30.22. Knight enters the final in his first Olympic Games, and when asked about the pressure, the 25-year-old said he isn’t going to let that affect his performance.

“I don’t feel any pressure,” said Knight. “I still feel like a rookie here. I’m fortunate enough to learn very quickly but my goals from 2019 to now is to be as competitive as possible, so no matter what, no matter who I’m racing, I’m going to give it my best out there and finish strong with everybody.”

In the morning session, 10-time Canadian champion Liz Gleadle kicked off her third Olympic Games in round 1 of the women’s javelin. With a throw of 59.19 metres, Gleadle did not advance to the women’s final. Tim Nedow also competed in the men’s shot put qualification round, but won’t advance after a throw of 19.42 metres.

In the women’s 400m, the duo of Kyra Constantine and Natassha McDonald made their Olympic debuts, racing to times of 51.69s and 53.54s, respectively. For Constantine, her time was enough to advance her into the semifinals.

“I’m just really glad for the opportunity to come out here and bring my childhood dream to life,” said Constantine. “I’ve been dreaming about this since I was eight years old. To actually be here, all the hard work, all the sacrifice, all the dedication I put into this sport for the past decade and a half really paid off.”

Up next for Canada will be the two-day decathlon and heptathlon. Damian Warner will look to build off his decathlon bronze medal in Rio, and is now joined by Pierce LePage in his Olympic debut. Georgia Ellenwood will also make her debut in the heptathlon.

Gabriela DeBues-Stafford and Lucia Stafford will return to Olympic Stadium looking to earn their spots in the women’s 1500m final while Kyra Constantine looks to do the same in the women’s 400m semifinal.

Genevieve Lalonde will race in the women’s 3000m steeplechase final before the men’s 200m final concludes the night’s festivities. 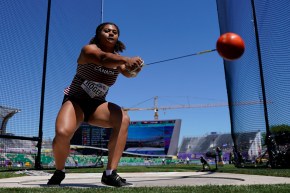