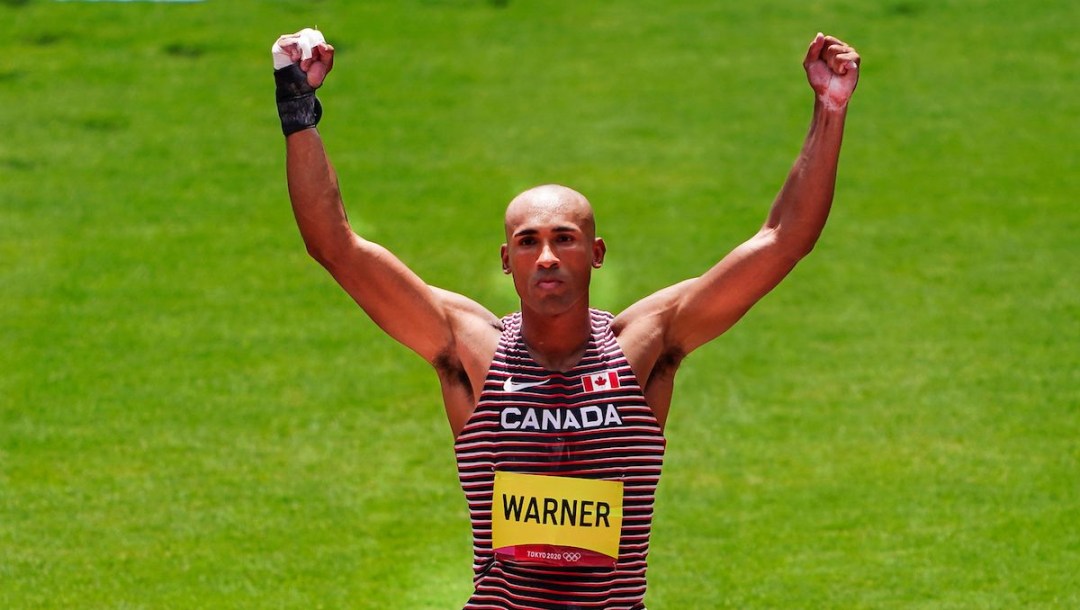 Records were falling left and right at Olympic Stadium on the sixth day of athletics at Tokyo 2020.

Aaron Brown got off to a strong start in the 200m final and finished in sixth place with a time of 20.20s, his first time in an individual Olympic final. Running with a photo of his wife and son under his bib, knew that they would be proud of him and wanted to show his best effort at the Olympics. The Canadian sprint duo will return to the track for the men’s 4x100m relay.

“It’s not the result I wanted but I’m satisfied, I know there’s more work to be done,” said Brown. “I came far, I came a long way. This isn’t the end of the road so I’m not going to hang my head, I’m proud of what I did to get here and I’m going to keep grinding, waiting for my opportunity to challenge for a medal.”

Damian Warner and  Pierce LePage could not have asked for better starts to their Tokyo 2020 Olympic decathlon.

Out bright and early inside the Olympic Stadium for the 100m dash, Warner matched his own world decathlon best time of 10.12 seconds (1066 points) to top the event. In the long jump, an event in which he also holds the world best mark for decathletes, Warner was in full stride. His best jump of 8.24m (1123 point) was the best not only in this competition, but also sets an Olympic decathlon best mark. With a season-best effort of 14.80m in the shot put, Warner gained another 777 points to conclude the morning session with 2966 points.

“It was the start I was looking for,” said Warner, competing in his third Olympic Games. “It’s on par with where I was earlier this year when I had my lifetime best performance so just got to keep building on this. High jump and the 400 metres later today, finish strong and then come out tomorrow with the same energy.”

Coming into Tokyo 2020, Warner had earned a gold medal at the 2019 Pan American Games, sandwiched between two bronze medals from Rio 2016 and 2019 World Athletics Championships. A strong 2021 season saw him break his own Canadian record at the Götzis Hypomeeting, where he earned a historic sixth career victory with a lifetime best of 8995 points — ranking him as the fourth-highest scoring decathlete of all time. He wants to give his best effort, keep it fun, and hopes that mindset helps him continue his strong performances.

“How the last two years have gone, I think that it would be a shame to come here and have a miserable decathlon or a frustrating or stressful experience,” Warner added. “I’m trying to enjoy it as much as possible, and obviously the performances help. It’s a great start.”

LePage, making his Olympic debut, wasn’t far behind, clocking 10.43 seconds (992 points) to finish in third in the 100m. His season-best long jump of 7.65m (972 points) put him atop group A, trailing only Warner’s mark overall in the competition. He regained some points against his compatriot, throwing a personal best of 15.31m (809 points) in the shot put. LePage sits in second after three events with 2773 points.

In the evening session, Warner continued to hold onto his lead, clearing the high jump bar at 2.02m before running a season best 400m, finishing with a time of 47.48s. He will go into the second day of the decathlon with 4722 points, 81 points ahead of Australia’s Ashley Moloney.

LePage continued his strong showing, jumping 1.99m in the high jump and capping off his day with a personal best run in the 400m race, with a time of 46.92. LePage sits in third place with 4529 points.

“Being my first Olympic Games, I was a bit shaky in the first two events, not exactly where I wanted but close enough,” said LePage. “I did way better in the shot put and 400m, better than I thought I’d be. I’m just ready to show everybody what I’m made of. I think I’ve been working hard, especially for day two, so I’m excited to see it finally in form.”

In the first of two finals involving Team Canada, Genevieve Lalonde put everything into the women’s 3000m steeplechase. After setting a personal best and reclaiming her Canadian record in the semifinal with a time of 9:22.64, Lalonde lowered it again, crossing the finish line with a time of 9:22.40 to finish in 11th place — a Canadian best ever Olympic result in the event.

“Being able to run my best considering everything that’s happening around the world, I’m just so lucky to be able to represent my country here with two national records back-to-back. I’ve never run that fast ever, so to be able to do that two times in a row, I’m very satisfied with the results.”

In the women’s heptathlon, Georgia Ellenwood clocked 13.47 seconds (1055 points) in the women’s 100m hurdles to get her first Olympic Games underway. That was just 0.07 seconds off of her personal best. Ellenwood showed a strong and clean performance in the high jump, with a personal best height of 1.83m for 1016 points. Ellenwood built on her morning performance, with a 12.39m throw in the shot put before the 200m event, where she clocked 24.51s and will sit in 15th place with 3690 points heading into day two of the heptathlon.

“I’m happy with the events, the hurdles was consistent. Going into each event with a clear head, I knew the high jump was going to go well because I’ve been practicing well, just executing exactly what I’ve been doing in practice,” said Ellenwood, who moved from Wisconsin to now train out of Toronto Track and Field Centre in Toronto. “I’m in a good spot right now but I’m not going to get ahead of myself.”

More action on the track, Gabriela DeBues-Stafford and Lucia Stafford raced in the women’s 1500m semifinal, looking to advance to the women’s final. DeBues-Stafford went on to clock a season best, 3:58.28, to move onto the final, while sister Stafford who finished with a time of 4:02.12, will not advance.

Kyra Constantine raced in the women’s 400m final, finishing with a time of 51.22 seconds for fifth in heat three to conclude her first Olympic Games.