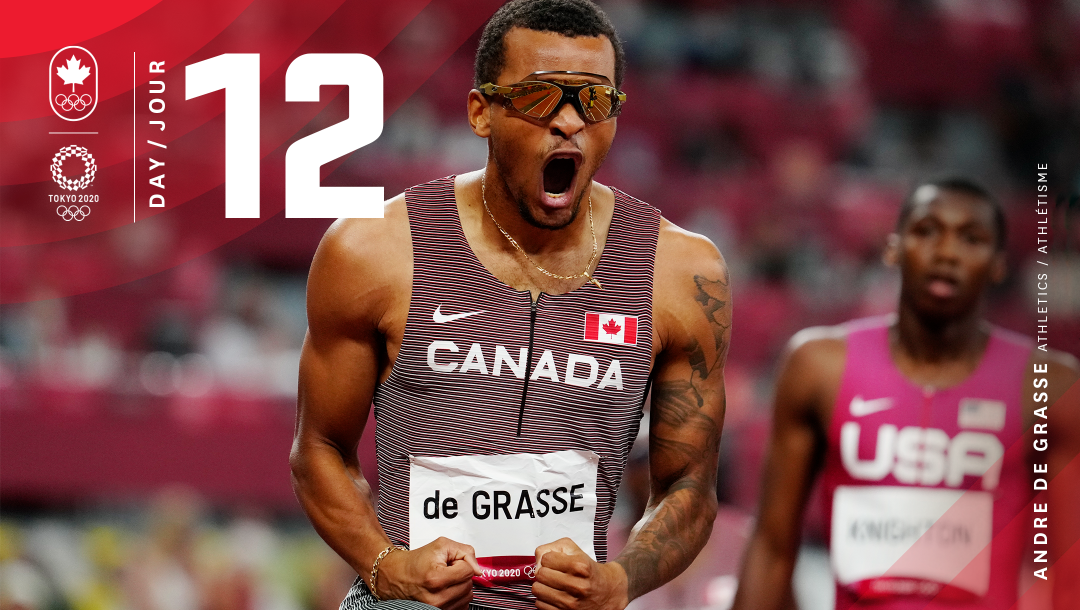 The headline event of the day was the men’s 200m final, featuring Andre De Grasse and Aaron Brown and it didn’t disappoint. De Grasse ran a Canadian record 19.73 seconds to win his semifinal, did it again, clocking 19.62s in the final to win the Olympic gold medal. Brown got off to a strong start as well, clocking 20.20 to finish in sixth place. De Grasse earned his second medal of Tokyo 2020 and his second straight Olympic medal in the 200m.

After setting a national record in the heats, Geneviève Lalonde did it again in the final, lowering the mark to 9:22.40 to finish 11th in the women’s 3000m steeplechase, a Canadian best ever Olympic result.

It was also Day One of the decathlon for Damian Warner and Pierce LePage, who competed in the 100m, long jump, shot put, high jump, and 400m.

READ: Warner, LePage off to strong start in Olympic decathlon

Warner matched his world decathlon best in a statement 100m race, clocking 10.12 seconds. LePage wasn’t far behind, finishing in third place with a time of 10.43s. The duo would go onto finish 1-2 in the long jump competition, with jumps of 8.24m (an Olympic decathlon best) for Warner and 7.65m for LePage. LePage led the way in the shot put, throwing a personal best 15.31m while Warner had a season-best throw of 14.80m.

In the evening session, Warner hit a high jump of 2.02m while LePage got 1.99m before the Canadian duo ended strong in the 400m. Warner concluded with a season best time of 47.48s, while LePage clocked 46.92s, a personal-best.

Warner will enter the tomorrow as the leader in the decathlon, with 4722 points. LePage sits in third with 4529 points.

Georgia Ellenwood also competed in Day One of the heptathlon, with the 100m hurdles, high jump, shot put, and 200m on the schedule. Starting her day with a 10.47s in the 100m hurdles, she was just 0.07 seconds off her personal best of 10.40, before jumping a personal best, 1.83m in the high jump. Finishing off her day with a throw of 12.39m in the shot put and a time of 24.51 in the 200m event, Ellenwood concluded the first day of heptathlon with a total of 3690 points for 15th place overall.

Sisters Gabriela DeBues-Stafford and Lucia Stafford raced in the semifinals of the women’s 1500m, with DeBues-Stafford running a season-best 3:58.28 to advance into the final. Stafford’s 4:02.12 was not quite enough for her to move on. Kyra Constantine ran a strong women’s 400m, finishing fifth in her semifinal heat with a time of 51.22.

Following their results in the Free Routine Preliminary and Duet Technical Routine, Jacqueline Simoneau and Claudia Holzner were in fifth place as they headed into the Duet Free Routine Final. They earned 93.000 points to remain in fifth overall, Canada’s best result since London 2012.

Kate Sanderson got the day started for Canada in the grueling women’s 10k marathon. She finished 18th in a time of 2:04:59.1.

Katie Vincent and Laurence Vincent Lapointe were part of history as they competed in the women’s C-1 200m heats, the first women’s canoe sprint event to ever be contested at the Olympic Games. Both won their heats to advance directly into the next-day semifinals.

Nick Matveev and Mark de Jonge raced in the heats of the men’s K-1 200m, the event in which de Jonge won bronze at London 2012. After not earning direct advancement to the semis, they raced in the quarterfinals. Matveev was second in his quarter to get a spot in the semis while de Jonge was third in his quarter and did not move on. He revealed afterwards that he would be retiring at the end of the Games. The men’s K-4 500m is still on his schedule.

Michelle Russell also had to go through the quarterfinals of the women’s K-1 500m and finished third in her race to advance to the semifinals. Brian Malfesi and Vincent Jourdenais finished fourth in their quarterfinal of the men’s K-2 1000m and will next compete in the B final.

Meaghan Benfeito and Celina Toth competed in the preliminary round of the women’s 10m platform, seeking a top-18 finish to advance to the semifinals. Benfeito, who won bronze in this event at Rio 2016, finished fifth with a score of 331.85 to easily move on. Toth scored 261.40 to finish 23rd in her Olympic debut.

A day after breaking the Canadian record, the men’s team pursuit squad faced Germany, who they beat in the first round, in a head-to-head match-up to determine fifth and sixth place. The Canadians easily won the race and had the country’s best performance in the event since 1932.

The Canadians sprinters also saw their first action. Kelsey Mitchell and Lauriane Genest each won their first round heats of the keirin to move directly into the quarterfinals. Hugo Barrette and Nick Wammes competed in the qualifying round of the men’s sprint and advanced into the 1/32 finals. Barrette was eliminated in the repechage for that phase, while Wammes moved on to the 1/16 finals before being eliminated in that repechage.

Brooke Henderson and Alena Sharp teed off for the first round of the women’s stroke play tournament. Unfortunately, it was a tough day for both as they each shot a three-over par 74 and sit eight strokes back of the leader.

Alannah Yip competed in the qualification round for speed, bouldering and lead, hoping to be among the top eight in the combined scores to advance to the final. She broke the Canadian record in the speed event, climbing the 15m wall in 7.99 seconds, before going on to finish 14th overall.