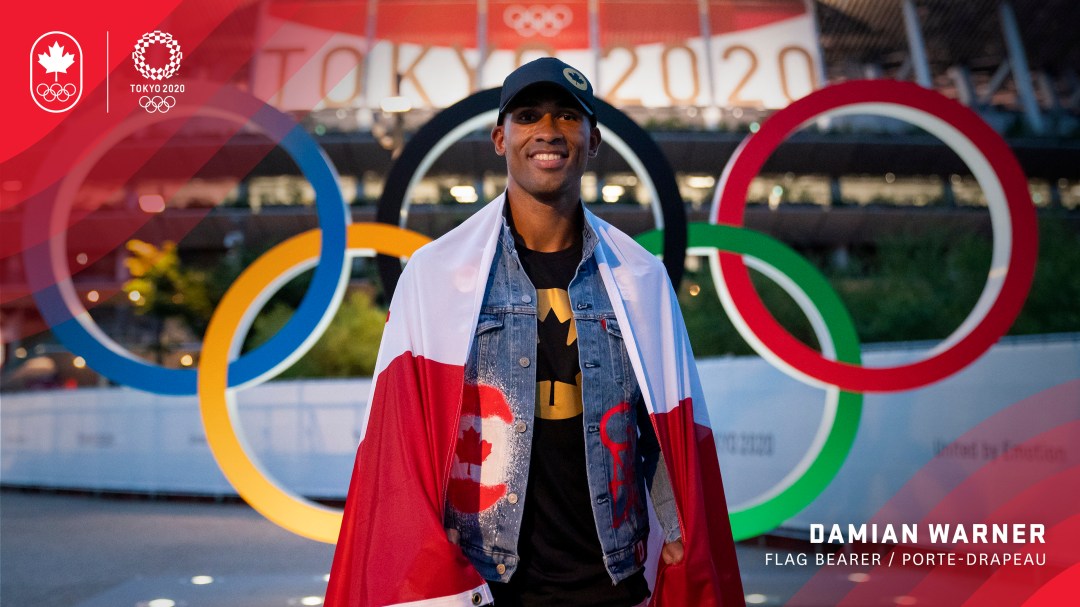 The decathlete, who won gold while breaking the 9000-point barrier for the first time, was revealed as Team Canada’s Closing Ceremony flag bearer on the final day of Tokyo 2020.

Warner is the first track and field athlete to be given the honour since high jumper Greg Joy at Montreal 1976.

“Being named the flag bearer for this group of Team Canada athletes is a tremendous honour and an amazing way to cap what has been an unbelievable few days for me,” said Warner. “What each of us has gone through over the past 18 months to even get to these Games is what makes Tokyo 2020 all the more special.”

Warner’s performance in Tokyo was one for the record books – literally. He smashed the previous Olympic record with his score of 9018 points. He became the first Canadian decathlete to surpass the 9000-point mark, something only three men had done before him. But he was the first to do it in Olympic competition.

His performance is even more remarkable after remembering that he spent most of the winter training in a makeshift setup for his 10 different running, jumping, and throwing events in an old, unheated hockey arena in his hometown of London, Ontario – a far cry from the intensive, focused training camps he was used to for major competition preparation.

At one point he confessed to his coach his doubts about whether an Olympic gold was in his future. Warner is a prime example of the resilience Canadian athletes have shown throughout the COVID-19 pandemic, rising to the occasion while the world was watching them compete on the biggest stage in sports.

“Though I compete alone, I’ve never felt more support, not only from my coach, Gar, but from my community and everyone back home cheering us on. As a team we had our respective challenges training through the pandemic and that collective experience will always be a part of our story. It is a journey that we can all be incredibly proud of,” said Warner.

Tokyo 2020 marked Warner’s third Olympic appearance. He debuted at London 2012 with a fifth-place finish before stepping onto the podium with a bronze at Rio 2016. He is the only Canadian combined events athlete to win multiple Olympic medals.

“What motivates me is, it’s just really special to be able to go up there and to stand on the podium and hear the Canadian national anthem,” said Warner.

“It’s one of those things where this is a dream come true for me. When I was working with my coaches when I first started the decathlon, it was to come to the Olympics and to win the gold medal. To be able to share this moment with my coaches, with Canada, with all of them, there’s no greater joy than that.”