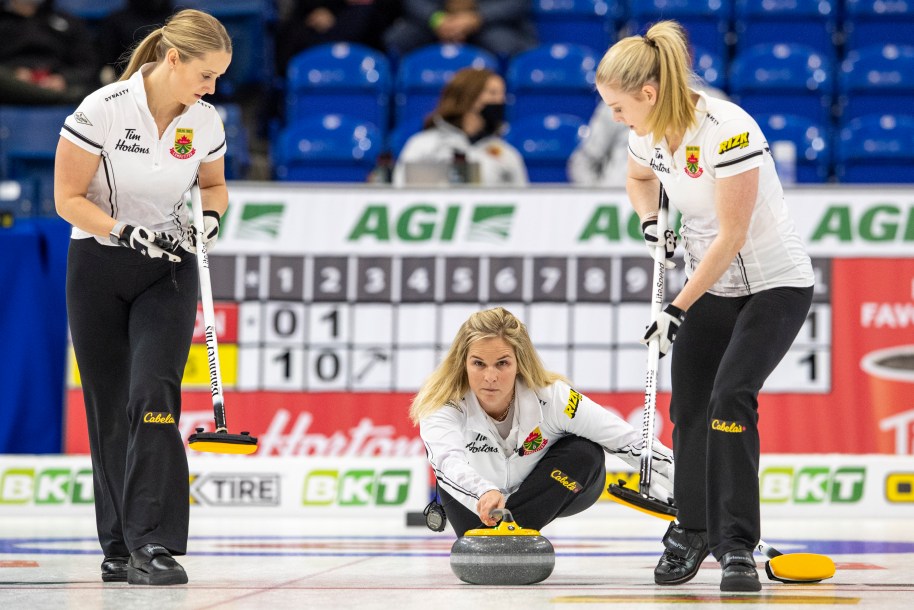 Three days of the Canadian Curling Trials are in the books.

The stakes could not be higher and the level of curling is definitely high.

Many of the games so far have come down to the final end. While there’s respect amongst the nine men’s and nine women’s teams, a burning desire exists to represent Canada in the Olympic curling competitions at Beijing 2022.

With the Curling Trials taking place every four years, turnover is bound to occur. While new teams have emerged, it’s the experienced curlers who are rising up the round robin standings in Saskatoon, aiming to be among the top three who get into the weekend playoffs.

Ten draws remain. Olympic dreams hang in the balance. Though there’s a lot of curling still left to be played, a few storylines have emerged after three days on the ice.

It was almost eight years ago at the Ice Cube Curling Center in Sochi, Russia that Jennifer Jones captured her first Olympic gold medal, defeating Team Sweden 6-3 in the final. It was Jones’ banner accomplishment in a career that’s consisted of six Canadian titles and two world championship victories.

Jones’ last two games went down to the wire. Against Team Walker, the game went to an extra end, before Team Jones claimed the winning point. Facing Team Scheidegger on Monday night, who brought the game to within one heading for home, Jones possessed the hammer in the final end.

The slim chances for Team Scheidegger were dashed. Jones didn’t have to throw her final rock, sealing the team’s fourth win.

“Everyone is so good out here. It’s hard to win,” Jones said after her victory against Walker. “You’re going to need everything to go your way.”

Team Jones leads the field in all throw-throughs at 86 percent as they clearly play with confidence.

The Two Brads: Gushue and Jacobs

Coming into the Curling Trials, there was a spotlight on Brendan Bottcher, who won the 2021 Brier and booked Canada’s Olympic berth at the world championships. Kevin Koe was Canada’s most recent men’s Olympic skip at PyeongChang 2018.

But there were also the two Brads — Gushue and Jacobs — who each already own Olympic gold medals from Turin 2006 and Sochi 2014, respectively. Through three days, they are tied atop the men’s round robin standings with 3-0 records.

Taking on Bottcher in the first game, Gushue was down heading to the final end. An uncharacteristic missed opportunity for Bottcher paved the way for Gushue to claim three points and the game. In the next game against Koe, Gushue stole multiple points, capitalizing on his opponent’s mistakes.

It seems that the closer the game, when a particular shot needs to be executed, Gushue’s advantage is his mental toughness.

“That’s what we play for,” Gushue said after defeating Bottcher. “It was exciting to have and I made the shot so that’s the important part.”

Unlike Gushue, Brad Jacobs cruised his way to his undefeated start. Through the first three games, Team Jacobs has outscored opponents 21-11.

On Wednesday afternoon at 3 p.m. ET, Gushue and Jacobs will go head-to-head for first place in the men’s round robin. This could play a huge part in determining who gets the bye to the championship final on Sunday, skipping Saturday’s semifinal. Team Jacobs and Team Koe will also be a critical match (3:00 p.m., Nov. 25) as Koe (currently 2-1) will head into that after playing against Team McEwen (currently 2-0) in a rematch of the 2017 Trials final.

On the women’s side, Team Jones’ final two games will be the most consequential. On Thursday morning, they’ll face Team Homan (currently 1-2) with three of the players who competed at PyeongChang 2018. The next day brings a showdown with Team Fleury, also undefeated through the first three days at 3-0. Individually, skip Tracy Fleury leads the field in all throw-throughs (91 percent).

Below are the round robin standings after seven draws: