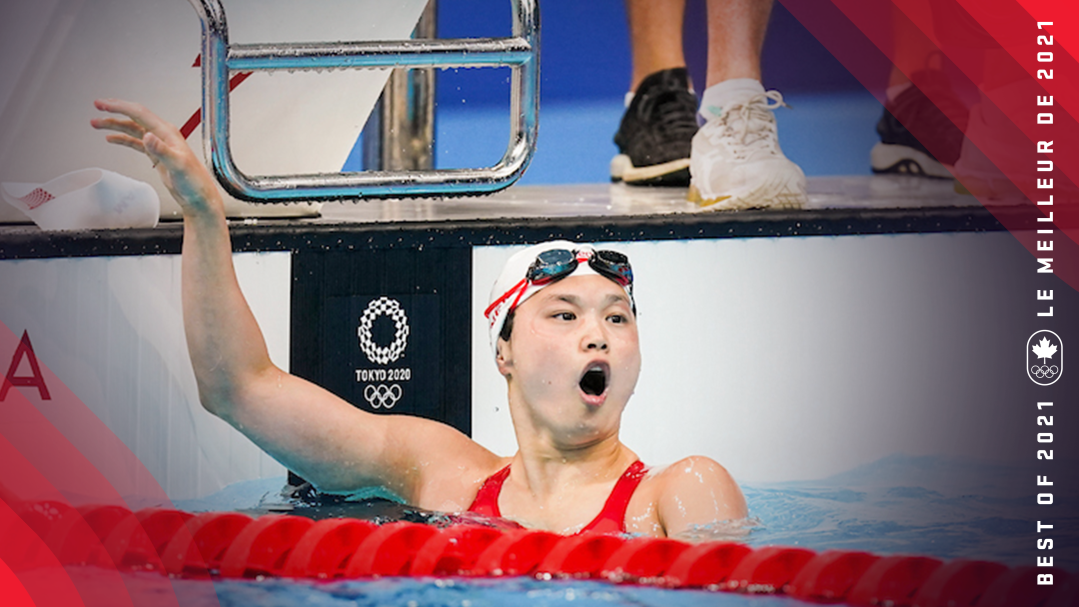 While Penny Oleksiak grabbed the headlines for becoming Canada’s most decorated Olympian of all time, she was far from the only Canadian swimmer to step on the podium this summer.

Starring in the individual events were Maggie Mac Neil and Kylie Masse, who each came home with three medals, helping Canada to six in swimming for the second straight Games.

Here’s a quick look back at their summer of success in the pool:

In her Olympic debut, 21-year-old Mac Neil gave Team Canada its first gold medal in Tokyo as she set a Canadian and Americas record in the 100m butterfly. She was just the third Canadian woman to ever win an Olympic gold medal in swimming.

That had come just a day after she was part of the 4x100m freestyle relay team (with Kayla Sanchez, Rebecca Smith, and Penny Oleksiak) that won silver for Canada’s first medal of Tokyo 2020.

In her second Olympic appearance, Masse became the fourth woman to ever finish as runner-up in both the 100m and 200m backstroke events at the same Olympic Games.

In the 100m, she improved upon the bronze she had won at Rio 2016 before going on to break her own national record in the 200m to claim her second silver.

On the last day of the swimming competition, Mac Neil and Masse were part of a formidable lineup in the 4x100m medley relay. Masse led off in backstroke, followed by Sydney Pickrem in breaststroke, Mac Neil in butterfly, with Oleksiak anchoring on the freestyle leg. They broke their own national record to win the bronze medal.

Mac Neil capped off her life-changing year with some additional hardware. In October, she was named Best Female Athlete of Tokyo 2020 at the Association of National Olympic Committees Awards in Crete, Greece.

Not bad at all for someone who had spent a significant amount of time training in her backyard pool in London, Ontario because of closures due to the COVID-19 pandemic.