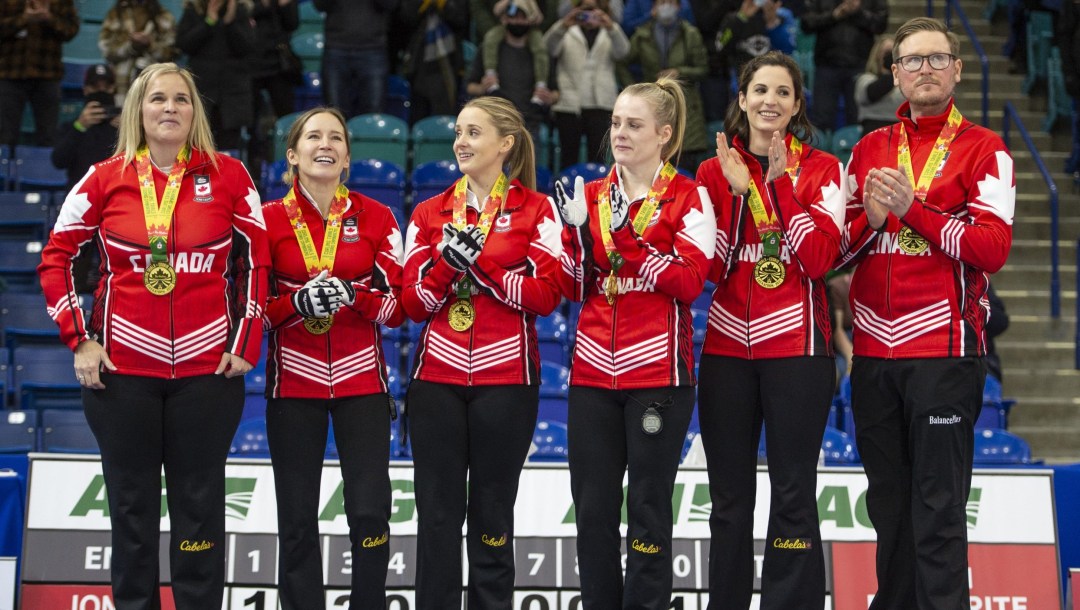 If there’s one thing that Jennifer Jones has never backed away from on a sheet of curling ice, it’s a challenge.

And she’s not about to back away from one of the biggest of her incredible career: bringing back a gold medal in women’s curling from the 2022 Olympic Winter Games.

The 2014 Olympic gold medallist is back with two other members who were with her in Sochi, Russia – third Kaitlyn Lawes and lead Dawn McEwen — along with newcomer second Jocelyn Peterman in a bid for a second gold to add to her already unmatchable resume.

Jones, with Lawes, McEwen and now retired Jill Officer, have won everything available in curling: Olympic gold, two world championships and six Canadian titles. Their passion for the game hasn’t wavered and despite being Canada’s oldest female Olympian at age 47, Jones still has the competitive juices that got her voted Canada’s greatest female curler of all time.

Now she faces one of the best fields in women’s curling history in a bid to regain an Olympic gold medal after Rachel Homan’s team did not reach the podium at PyeongChang 2018.

“There’s definitely an expectation for us to perform well,” Jones told a recent media availability session. “We can’t guarantee the outcome, but I can guarantee all of Canada that we are going to leave it all on the ice and not be scared to lose, and we’re just going to try our very best to win and try to do Canada proud.”

The Beijing field includes reigning Olympic champion Anna Hasselborg of Sweden along with 2018 silver medallist EunJung Kim of South Korea and Japan’s Satsuki Fujisawa who won the bronze. Add Silvana Tirinzoni of Switzerland, winner of the last two world championships, Russia’s Alina Kovaleva and three-time Olympian Eve Muirhead of Great Britain and it’s unlikely Jones will go unbeaten as she did in 2014. In Sochi, Jones had the highest shooting percentage for a female skip in Olympic history.

“I just think it says a lot about women’s curling where every year you’re saying the field is getting better and better,” said Jones. “I remember heading into Sochi and everybody was saying it was the best field that had ever been assembled in women’s curling.

“And now everybody is saying the same thing heading into Beijing. So, it’s an outstanding field. Every team is capable of winning the event. We’re going to have to play our very best in order to be on that podium.”

As strong as Canadian curlers have been through the decades and as immense as the country’s depth is, Canada has only won women’s Olympic gold twice in six Games since the sport gained official medal status at Nagano 1998. Its only other gold medallist is Sandra Schmirler who won in 1998.

Jones acknowledges this year’s event is different and she and the other athletes will miss the atmosphere of previous Games.

Many of the things that make the Olympics so special, like celebrating with families and other Canadians, and cheering on fellow athletes, will simply be memories.

“We went and cheered on every Canadian possible and we really soaked up the Olympic experience,” Jones said of her 2014 Olympic appearance.

“It’s too bad our families can’t be there because that was so amazing in Sochi,” she says. “But you still get to slide over the Olympic rings. And who gets to do that in their life? We’re just trying to look at all the great things we get to do and trying not to focus on things that we don’t.”