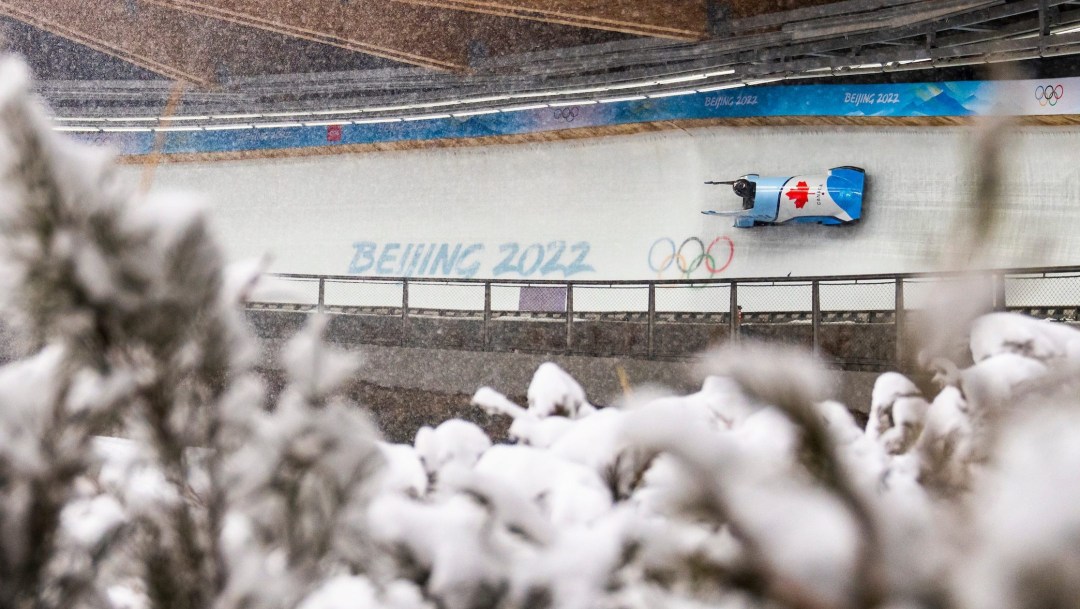 Halfway through the inaugural Olympic women’s monobob event, Canada’s Christine de Bruin sits in very strong contention for a place on the podium.

After the first two heats on Day 9, de Bruin is in second place with a combined time of 2:10.14. The third and fourth heats take place on Day 10, with the combined time from all four heats determining the medal winners.

The 33-year-old was tied for third after Heat 1, then had a blazing run in Heat 2 to overtake two competitors and move into the potential silver medal position.

“My first run was not as nice as I’d like it, but then I was able to fix those,” she said.

De Bruin noted that the ice had gotten much harder as compared to training on the previous day, which she said caused her a bit of slipping during the first heat.

But she wasn’t the only one being affected by those conditions. Fellow Canadian Cynthia Appiah, who came into these Olympic Winter Games third in the IBSF rankings in women’s monobob, got into trouble at the top during Heat 1 and couldn’t quite recover.

She was in 12th after Heat 1, but was able to move up to 10th following a cleaner second run.

“I’m so mad,” she said. “I really was coming in with expectations of doing well. I’ve been struggling all week.”

Appiah is competing in her first Olympic Games, having made the transition to pilot four years ago, after serving as an alternate brakewoman for PyeongChang 2018.

She noted the harder ice and snowy conditions at the Yanqing National Sliding Centre may have had an impact, but said she didn’t want to make any excuses.

“I’m not out yet!” she said. “It’s going to be a tough battle. I’m going to have to go back to the drawing board and regroup, and really figure out what I need to do.”

As for de Bruin, her hope will be more of the same on Day 10. She sits 1.04 seconds behind Kaillie Humphries of the United States, which is a big mountain to climb in bobsleigh. But much like Appiah, she’s not ruling anything out just yet.

“It’s a consistency race,” said de Bruin. “Anything can happen.”