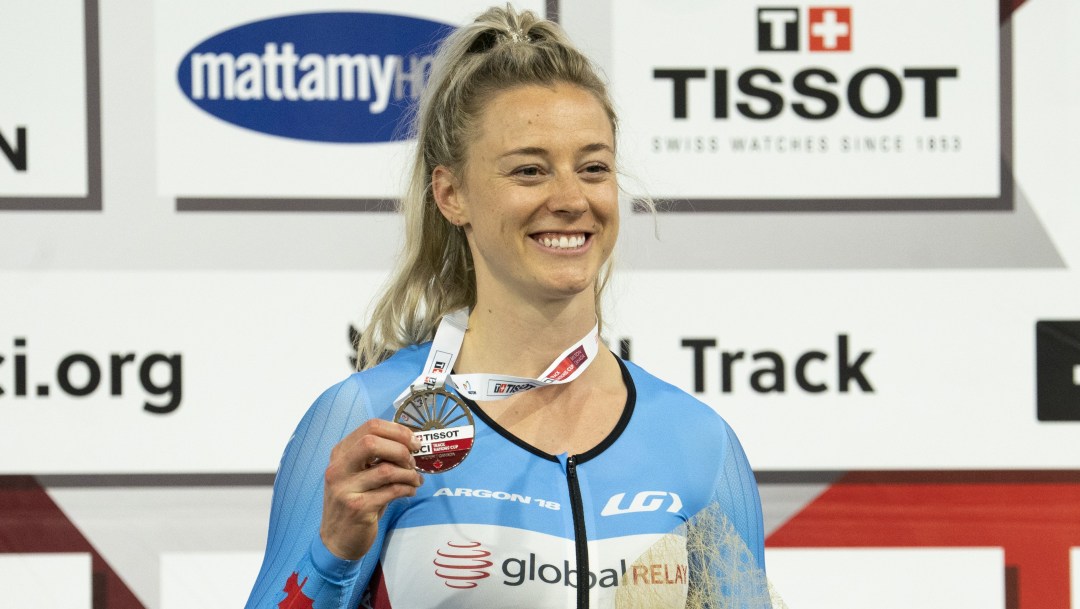 It was a big weekend for Team Canada as Olympic gold medallist Kelsey Mitchell gave the home fans a special performance at the velodrome in Milton, two bronze medals were won during the year’s first Diamond League meet, and Eleanor Harvey earns her second career fencing Grand Prix medal.

Here’s a quick look back at what you might have missed:

Kelsey Mitchell stole the show in front of home fans at the second stop of the UCI Track Nations Cup on Sunday in Milton, Ontario.

Her three-medal weekend was capped with a gold in the women’s keirin event on Sunday evening.

Mitchell played a part in all of Canada’s medal moments in Milton. On Friday she claimed silver in the sprint and the day before she earned bronze in the team sprint alongside Lauriane Genest, Sarah Orban and Jackie Boyle. There was nearly a fourth medal in the women’s team pursuit, but the Canadian squad lost the bronze medal race to the United States.

Canada also won medals in those three women’s sprint events at the first Nations Cup of the season in April in Glasgow. The next stop will be in Cali, Colombia in early July.

Canada’s track and field team had some great performances in the first Diamond League meeting of 2022 in Doha, Qatar.

In the men’s 800m event, Marco Arop won the bronze medal with a time of 1:49.51, while Django Lovett cleared the high jump bar at 2.27m on a windy day to also claim bronze.

Eleanor Harvey was the runner-up in the women’s individual foil event at the fencing Grand Prix in Incheon, South Korea. After defeating world number two Alice Volpi of Italy in the semifinal, Harvey ran into world number one Lee Kiefer of the United States in the final. The Canadian claimed the silver following a 15-11 loss to Kiefer.

This is the second career Grand Prix medal for Harvey, adding to a bronze she won in 2018. She adds to the two World Cup medals she won earlier in 2022, helping her to be ranked third in the world. Her teammate Jessica Guo made it to the quarterfinals and finished sixth overall.

After taking the title at the Madrid Open last weekend, Gabriela Dabrowski and Mexico’s Giuliana Olmos reached the final of the Italian Open in Rome.

Dabrowski and Olmos were defeated in the women’s doubles final by Veronica Kudermetova and Anastasia Pavlyuchenkova 1-6, 6-4, 10-7.

In the women’s singles tournament, Bianca Andreescu continued her solid play after returning from injury. She won her first three matches of the tournament in straight sets before being knocked out by eventual tournament champion and world number one Iga Swiatek in the quarterfinals.

Denis Shapovalov and Félix Auger-Aliassime were also ousted in the quarterfinals of men’s singles. Auger-Aliassime dropped a straight sets decision (7-5, 7-6[1]) to world number one Novak Djokovic. Shapovalov had gotten to the quarters by defeating clay king Rafael Nadal in the round of 16.

The defending champs are through two games at the IIHF Men’s Hockey World Championship. So far, so good.

Canada opened the tournament with a convincing 5-3 win over Germany on Friday.

After falling behind Italy in the opening period on Saturday, the squad ripped off six goals from six different players to win the game 6-1.

Tammara Thibeault (75kg) and Charlie Cavanagh (66kg) have both advanced to the quarterfinal rounds of their weight classes at the IBA Women’s World Boxing Championships in Istanbul. Those bouts will take place Monday afternoon. A win would guarantee at least a bronze medal.