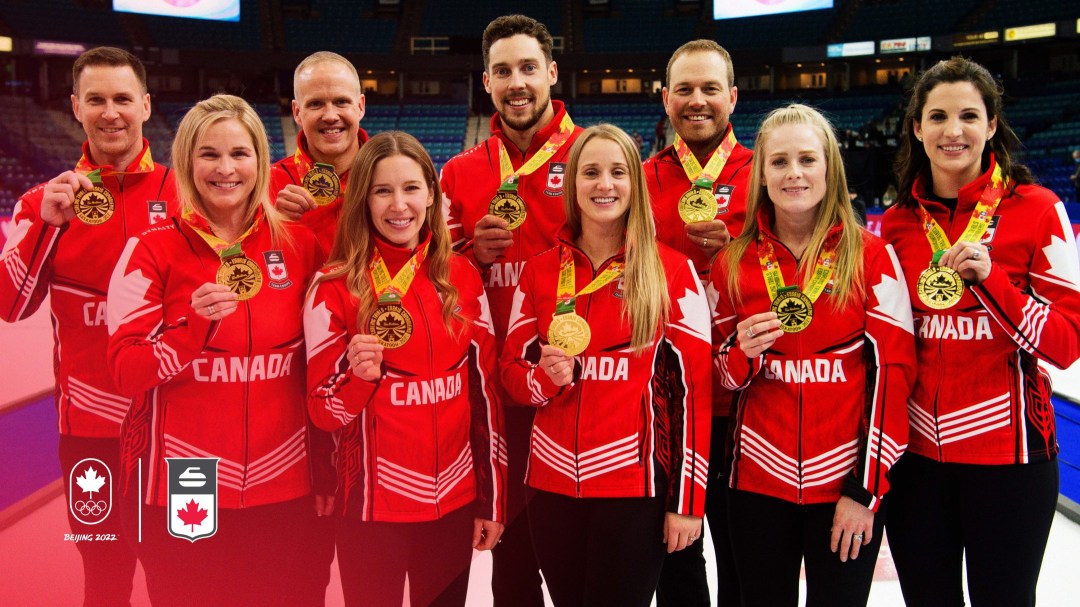 SASKATOON (November 29, 2022) – On Monday, Curling Canada and the Canadian Olympic Committee nominated the men’s and women’s curling teams that will compete at the Beijing 2022 Olympic Winter Games. They are the first group of athletes nominated to Team Canada.

Team Jennifer Jones and Team Brad Gushue qualified for the Games by winning the 2021 Curling Trials which were held in Saskatoon. Team Canada had earned the Olympic quota spots based on the results at the 2021 World Curling Championships that took place in Calgary this past spring.

The men’s team’s alternate/fifth player will be formally nominated at a later date.

2,838 days after defeating Team Sweden 6-3 to win gold at Sochi 2014, Jennifer Jones, Kaitlyn Lawes and Dawn McEwen are headed back to the Olympic Winter Games.

Lawes will be making her third trip to the Games having won gold in the inaugural Olympic Mixed Doubles tournament at PyeongChang 2018. Weagle made her first Olympic appearance at those Games where the women’s team placed sixth. Jocelyn Peterman will make her Olympic debut.

“I started curling as a little girl just because I loved the sport, and it was just a dream to get to the Winter Olympics,” said Jones. “To have the opportunity to get there twice, and to represent this country at the biggest sporting event in the world, is just beyond my imagination. I’m privileged to be able to share this experience with my amazing teammates and we can’t wait to be part of Team Canada in Beijing!”

Brad Gushue and Mark Nichols will return to the Olympic Winter Games 16 years after winning Canada’s first men’s curling gold at Turin 2006. Gallant and Walker will make their Olympic debuts.

Team Gushue had just one loss in the Canadian Curling Trials, and won 4-3 in a hard fought final against Team Jacobs, who won Olympic gold at Sochi 2014.

“As a team we’ve put in so much hard work on and off the ice, and to see it rewarded with another trip to the Olympics is very gratifying and humbling,” said Gushue. “Wearing that Maple Leaf at the Olympic Games is just such an amazing experience and we can’t wait to get to Beijing to do it again.”

The Beijing 2022 men’s and women’s Olympic curling tournaments start on February 9 and  February 10, respectively, with a round robin format. The medal matches will take place from February 18 to 20. The tournaments are held at the Ice Cube, formally called the National Aquatics Centre and known as the Water Cube at Beijing 2008.

“Our athletes and our High Performance staff have put in countless hours of hard work and preparation to get us to this point, and we are thrilled with the two four-player teams that will represent us in Beijing,” said Katherine Henderson, CEO of Curling Canada. “We have every confidence that our teams will be in the best possible position for success when they leave for China, and we look forward to cheering them on during the Games.”

Canada is the all-time leader in Olympic curling medals won with 11. Canada did not miss the podium in both the men’s and women’s tournaments from Nagano 1998 through Sochi 2014.

“Canada has been one of the most successful curling nations at the Olympics. Beijing 2022 will be no different as we will once again contend for the podium in all disciplines,” said Catriona Le May Doan, Team Canada’s Beijing 2022 Chef de Mission. “Being on-site at the Curling Trials, in my hometown of Saskatoon, has reminded me of how Canadian curlers continue to inspire both young and old all across our great country. Fans from every corner of Canada will be cheering on these men and women in their pursuit of excellence at Beijing 2022.”

The mixed doubles team will be nominated following the 2022 Mixed Doubles Curling Trials that take place in Portage la Prairie, Manitoba from December 28 to January 2.

The Team Canada Beijing 2022 qualification tracker can be found here.