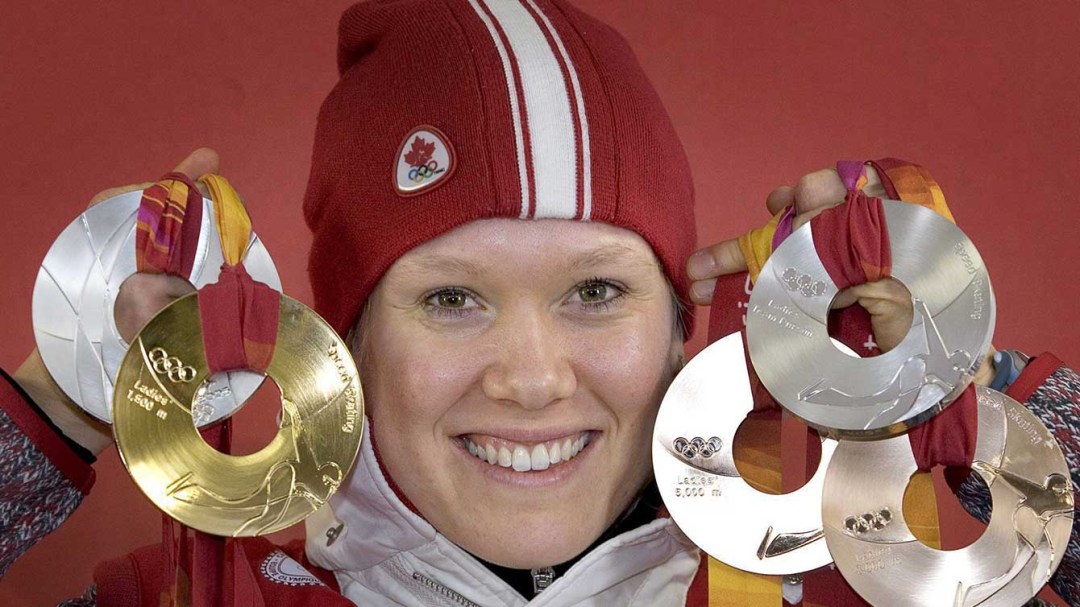 At the foundation of a country’s overall strength at the Olympic Games are the athletes whose performances put them on the podium.

While it may be difficult for most people to even fathom stepping up there once to accept a medal, these athletes have managed to do it multiple times, writing themselves into the Canadian record books.

Who are Canada’s Most Decorated Winter Olympians?

Over the course of three consecutive Winter Games, Gagnon competed in 10 events, winning medals in half of them. At Lillehammer 1994, Gagnon began his podium placements with a bronze medal in the 1000m, and four years later at Nagano 1998, he captured gold as a member of the men’s 5000m relay.

Just a blade short of a medal twice in the 500m, Gagnon finally managed to skip over the other two spots on the podium to claim gold at Salt Lake City 2002. That same day, he helped the 5000m relay successfully defend the gold medal. Gagnon also won bronze in the 1500m at Salt Lake City 2002, giving him three medals for the Games and a total of five for his career.

Also a short track speed skater on the gold medal-winning relay team at Salt Lake City 2002, Tremblay collected his next two silver medals at Turin 2006 when he competed in the men’s 500m and 5000m relay. He capped his Olympic career by winning 5000m relay gold and 500m bronze on the same day at Vancouver 2010.

Which Canadian Winter Olympians Won the Greatest Number of Golds?

In the highly anticipated debut of women’s ice hockey on the Olympic program, Wickenheiser and Hefford helped claim silver for Canada. Hungry for the taste of gold, they satisfied that craving at Salt Lake City 2002, where Ouellette was also part of the squad. Those three players continued to collect successive golds at Turin 2006, Vancouver 2010, and Sochi 2014. At the latter, Ouellette became the first winter athlete in the world to enter four Olympic events and win gold in all of them. No other Canadian athlete in any sport has won more than three Olympic gold medals.

Gagnon is tied with another short track speed skater, Charles Hamelin, for the greatest number of golds won by a Canadian male Olympian. After Gagnon completed his golden haul at Salt Lake City 2002, Hamelin did the same 500m and 5000m relay double at Vancouver 2010, winning both gold in a 30-minute span. He also won the 1500m to open the short track competition at Sochi 2014. At PyeongChang 2018, won his fifth career Olympic medal, a bronze in the 5000m relay.

Which Canadians Won the Most Medals at a Single Olympic Winter Games?

As a direct result of her success at Turin 2006, the five medals Klassen collected during the long track speed skating events gave her more podium finishes at a single Winter Games than any other Canadian athlete in any sport.

Boucher’s most successful Games came at Sarajevo 1984, where he stepped onto the podium in each of his three events. Boucher won gold in the 1000m and 1500m and took home bronze in the 500m. With an identical set of medals on the short track at Salt Lake City 2002, Gagnon tied Boucher for the most medals won by a Canadian man at a single Winter Games.

Tania Vicent started speed skating at age 10 and went on to compete at four Olympic Winter Games, winning a…