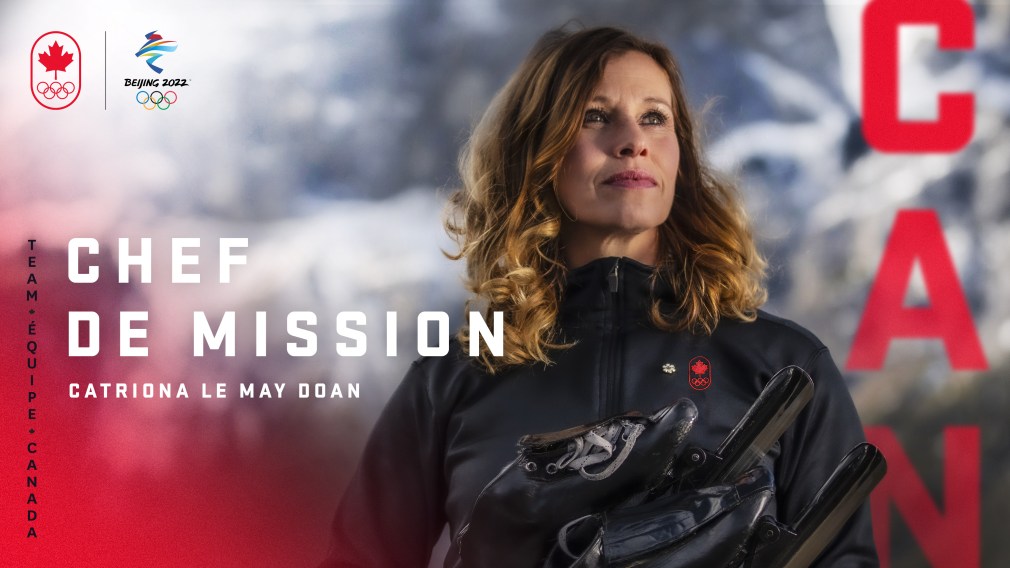 This is more than a title to me. It’s an honour and something I have always wanted to achieve. Now it feels like my Olympic journey is coming full circle.

My first Olympic Games were in 1992. Thirty years later, in 2022, I hope to help this generation of Team Canada athletes realize their sporting dreams.

I have led a full life when it comes to Olympic experiences. Not all of them resulted in victories, but each of them has helped me to become the woman, the advocate, the coach, the volunteer, the Mum, and the person I am today. 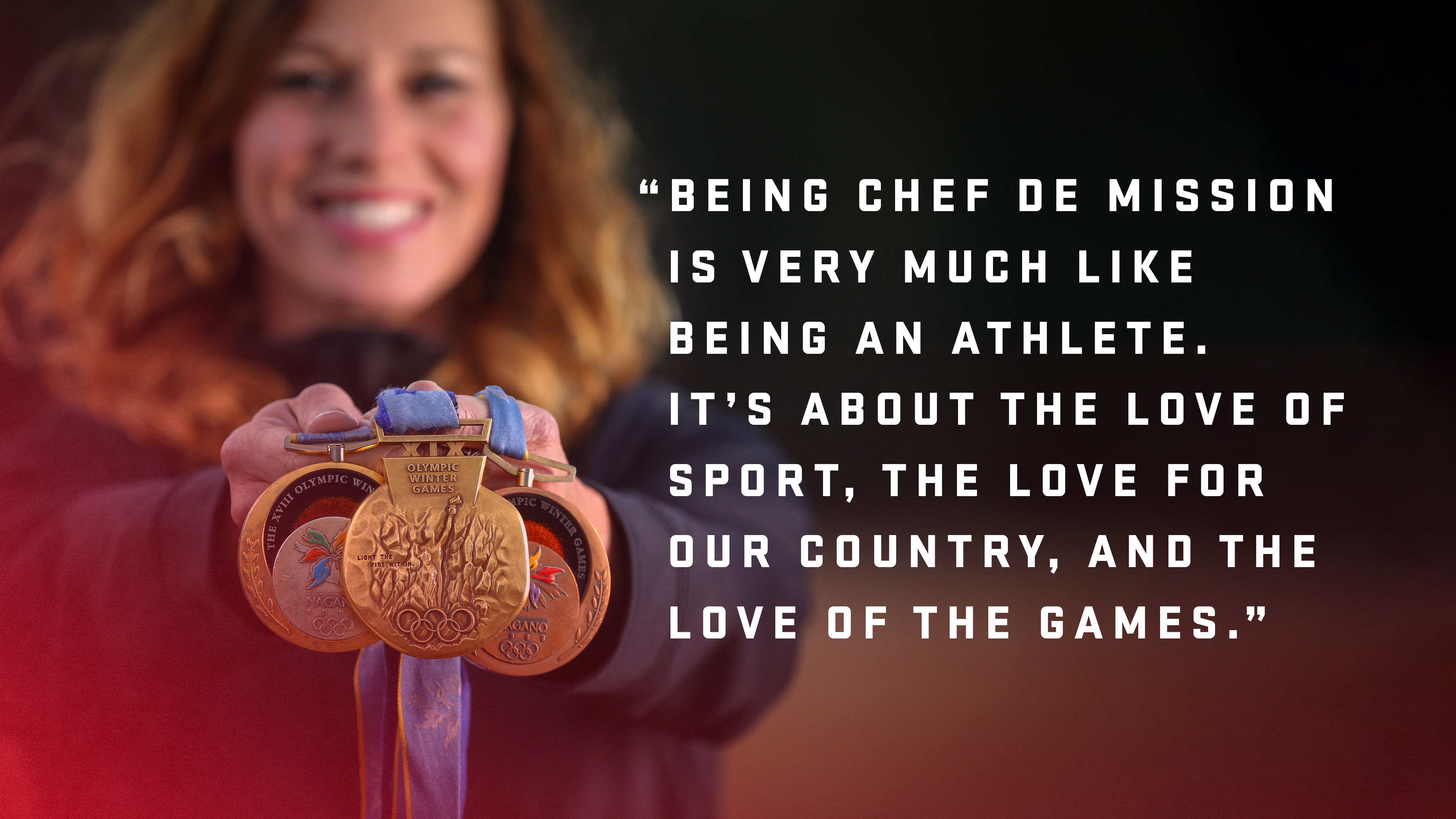 I entered the stadium for the Opening Ceremony at Albertville 1992 much like a deer caught in headlights – not sure what was happening and, frankly, a little bit stunned by the spectacle of it all. Two years later at Lillehammer 1994, I had my sights set on a medal, only to fall in my 500m race. I had to deal with the gut-wrenching feelings of failure for a very long time.

Fast forward to Nagano 1998 where I was the favourite to win the 500m. I came to those Olympic Games knowing that in a 37-second race, competing against the best in the world, there is absolutely no room for error. Carrying the Canadian flag into the Closing Ceremony a few days later, I understood I was a gold and bronze medal winner. But in the back of my mind I knew that four years down the road, I wanted to prove to myself and the rest of the world that I was worthy of being Olympic champion again – as good as gold.

In my final Games as an athlete at Salt Lake City 2002, just five months after the world was turned upside down by the tragedy of 9/11, I carried our flag with such pride, knowing that the Games could help us all overcome the threat of evil. I truly believe that the Olympics are about bringing the world together in peace through sport. 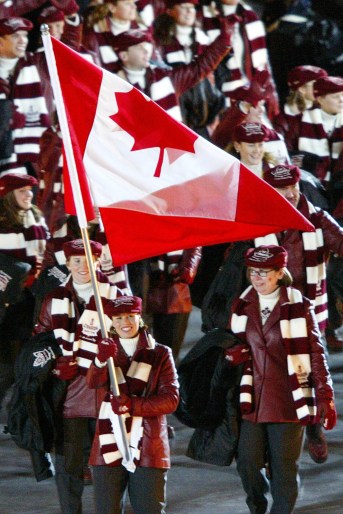 Catriona Le May Doan leads the Canadian team into the stadium during the opening ceremonies for the XIX Olympic Winter Games in Salt Lake City, Utah, Friday, Feb. 8, 2002. To the right of Le May Doan is team Chef de Mission Sally Rehorick. (CP PHOTO/Frank Gunn) 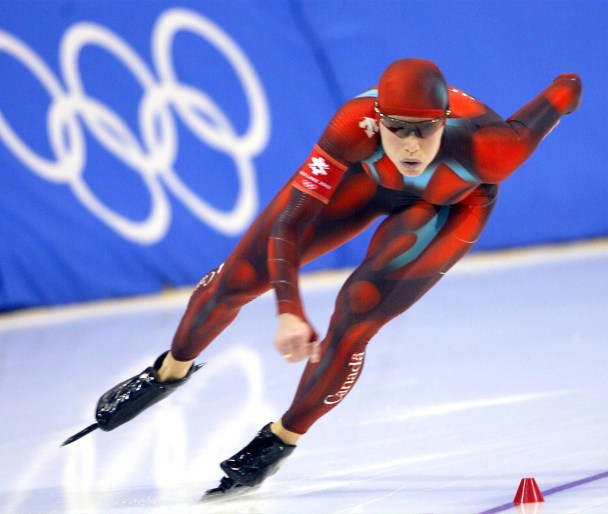 Catriona Le May Doan powers round the first turn on her way to an Olympic record of 37.30 seconds in the women’s 500m speed skating at the Salt Lake City 2002 Olympic games on Wednesday Feb. 13, 2002. (CP PHOTO/Frank Gunn) 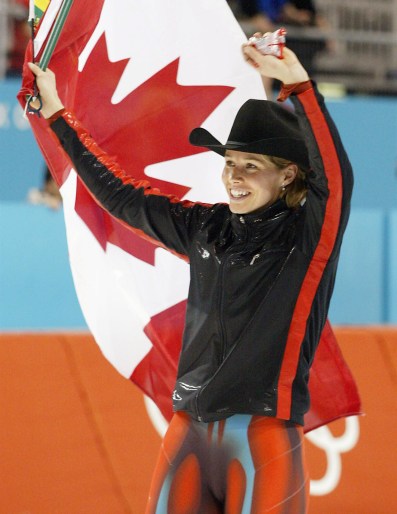 Catriona Le May Doan of Saskatoon, Sask., waves the Canadian flag as she skates around the ice after winning the gold medal in the women’s 500m speed skating at the 2002 Salt Lake City Olympic games on Thursday Feb. 14, 2002. (CP PHOTO/Frank Gunn)

It was at those Games where I would experience the most pressure I had ever faced in my life. As well as dealing with the so-called “flag curse,” I was constantly reminded of the fact that no Canadian individual had ever won back-to-back Olympic gold medals in the same event.

It was in Salt Lake City that I managed to dig deeper emotionally and mentally than I even knew possible and paved a way for others to follow.

It was there that I met one of my heroes, Brian Maxwell, a marathoner who was named to the Canadian Olympic Team that never got the chance to compete at Moscow 1980 because of the boycott. I watched as he entered the stadium for his very first Opening Ceremony, carrying the Canada placard just ahead of me. His pride and passion were evident as he finally got to live his Olympic dream.

In 2002 I was able to defend my gold medal and make Canadian Olympic history. But it was also at that time I realized that my next Olympic adventure was just beginning.

I spent the next five Games (2004, 2006, 2008, 2010, and 2012) as a broadcaster, bringing the Olympic stories to all Canadians. From fronting features, to conducting a memorable sideline interview with Kyle Shewfelt in Athens, to calling incredible speed skating performances like Cindy Klassen’s history-making five medals in Turin, to hosting CTV’s “Olympic Morning” in London, I feel like I did it all.

I loved it at times, but at other times felt that I wouldn’t survive the fatigue and stress of it all. But each time the Games came to a close, I felt like I was still a part of the Olympic family. 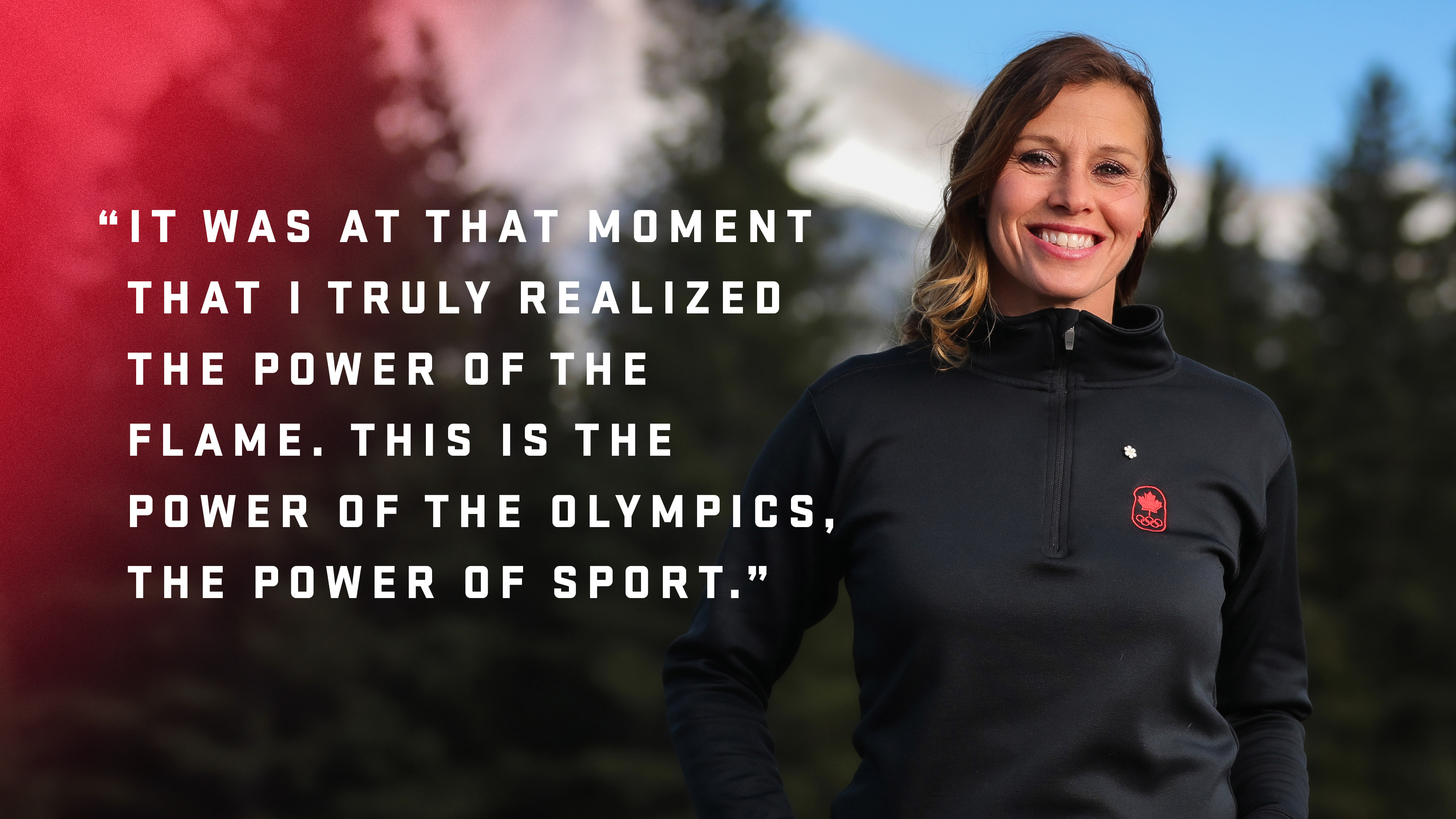 I am often asked what my most memorable Olympic experience is. People assume it involves the gold medals and standing on top of the podium to hear O Canada being played. Fortunately, I have had so many different and incredible moments that it is honestly hard to name one. I can, however, tell you the most powerful Olympic moment I have experienced.

It was October 30, 2009. I was asked to carry the torch alongside Simon Whitfield as we were the first torchbearers on the journey that would take the Olympic flame across our nation in advance of the 2010 Winter Games in Vancouver.  More than a decade later I now fully understand why that moment meant so much.

As athletes, we prepare. We train every part of our being to be ready for performance. There we were that morning in Victoria, B.C., getting ready to enter the stage area and light the first torch from the Olympic cauldron. The Olympic flame had just landed from Olympia, Greece and we had no idea what to expect. We were unprepared for what was ahead.

We entered the stage, ignited the torch, and started down the stairs. After a minute of walking we decided to start jogging. I will never forget as we ran, the faces of the people who lined the path looking up at the flame with so many hopes and dreams.

I was overwhelmed with emotion throughout the rest of the day. I flew home to Calgary and entered my house and my kids Greta and Easton, at that time 5 and 2, said “Mummy, we saw you with fire” and once again, I burst into tears of joy. 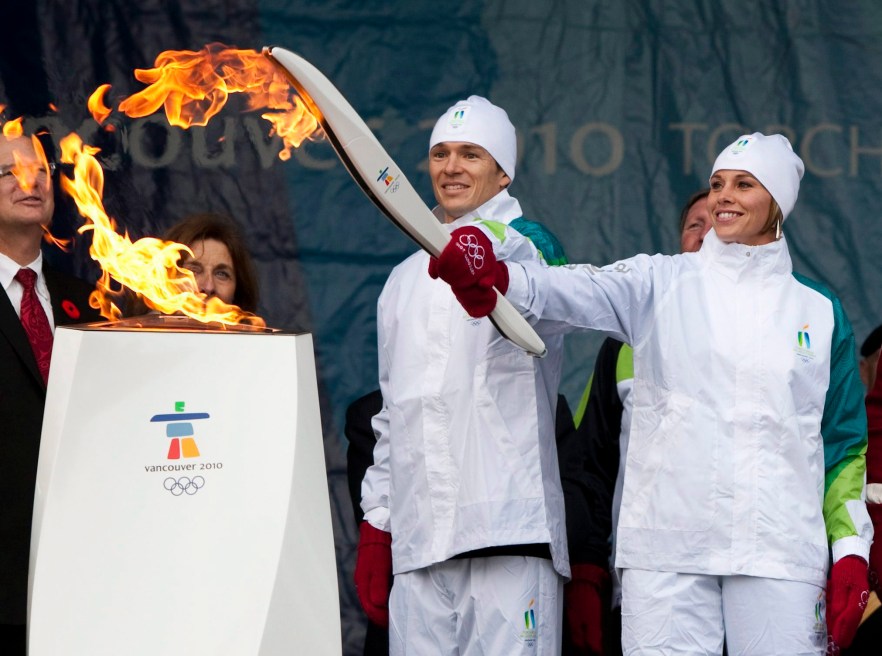 Catriona Le May Doan, right, and Simon Whitfield light the torch from the community caldron in Victoria, B.C., Friday, Oct. 30, 2009. The Olympic Flame which traveled all the way from Olympia in Athens will now start a 106 day cross country relay which will end in Vancouver on Feb. 12, 2010 to mark the start of the Vancouver 2010 Winter Olympic Games. during the Olympic flame lighting ceremony in Victoria, B.C., Friday October 30, 2009. THE CANADIAN PRESS/Sean Kilpatrick 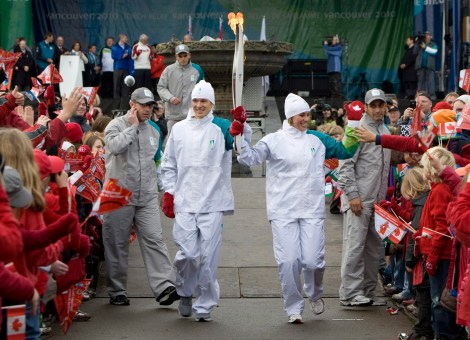 Catriona Le May Doan, right, and Simon Whitfield, run as the first torchbearers in Victoria, B.C. with the Olympic Flame, Friday, Oct. 30, 2009. The Olympic Flame which travelled all the way from Olympia in Athens will now start a 106 day cross country relay which will end in Vancouver on Feb. 12, 2010 to mark the start of the Vancouver 2010 Winter Olympic Games. THE CANADIAN PRESS/Jonathan Hayward 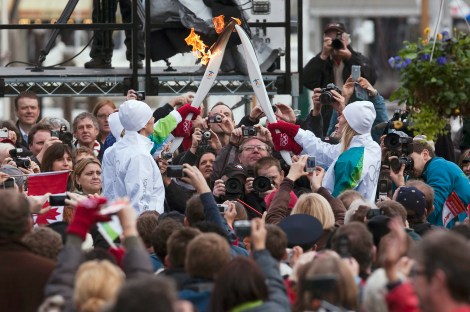 Catriona Le May Doan and Simon Whitfield, left, hand off the flame to Silken Laumann and Alexandre Despatie during the beginning of the Olympic Torch Relay in Victoria, B.C. with the Olympic Flame, Friday, Oct. 30, 2009. The Olympic Flame which travelled all the way from Olympia in Athens will now start a 106-day cross country relay which will end in Vancouver on Feb. 12, 2010 to mark the start of the Vancouver 2010 Winter Olympic Games.during the Olympic flame lighting ceremony in Victoria, B.C., Friday October 30, 2009. THE CANADIAN PRESS/Sean Kilpatrick

Even during the Vancouver 2010 Opening Ceremony when I was to light one of the arms of the cauldron, or at any of my medal ceremonies, or any other Olympic moment, never have I been as moved as I was on that cool October morning in Victoria when the sheer magnitude of the Olympics became so real to me.

The 2018 Winter Games in PyeongChang were a turning point for me. I had a lot of change in my personal life and when the opportunity came to join Team Canada as a Mission Team member, I left my role in the media and assumed the volunteer position of Lead Athlete Mentor.

It was a busy month of February sitting in the lounge, chatting with the athletes, stocking shelves with snacks, making pot after pot of coffee, watching training, watching competition, talking to athletes post-competition, and cheering them on through the victories and defeats. Yes, I missed my kids. Yes, it was exhausting, but it was four weeks that confirmed that one day, I wanted to be in the role that Isabelle Charest was playing in South Korea.

It goes back to something I have always wished for my children: I care less about them being the best. I care more about helping them be their best.

That’s why I want to be Chef de Mission.

If these uncertain times have shown us anything, it’s about not taking anything for granted, celebrating sport and its positive impact on the physical, social, and mental well-being of our communities. It’s about dealing with all of life’s obstacles and being our best selves.

I can’t wait for February 2022. I think about walking into the Opening Ceremony as proud Canadians celebrating the freedoms and opportunities we all share as a people. I truly want to be a part of the journey where Team Canada members will have the chance to live out their dreams.

Being Chef de Mission is very much like being an athlete. It’s about the love of sport, the love for our country, and the love of the Games. None of it comes with a pay cheque. It takes a lot of time away from loved ones. It takes sacrifice and commitment.

That’s why I’m here in November of 2020, fully aware that my Olympic dream is still becoming a reality.

Catriona Le May Doan is a four-time Olympian, three-time Olympic medallist, three-time 500m world champion and two-time world sprint champion in long track speed skating. In November 1997, she became the first woman to break the 38-second barrier in the 500m, the first of her six consecutive world records in the distance.