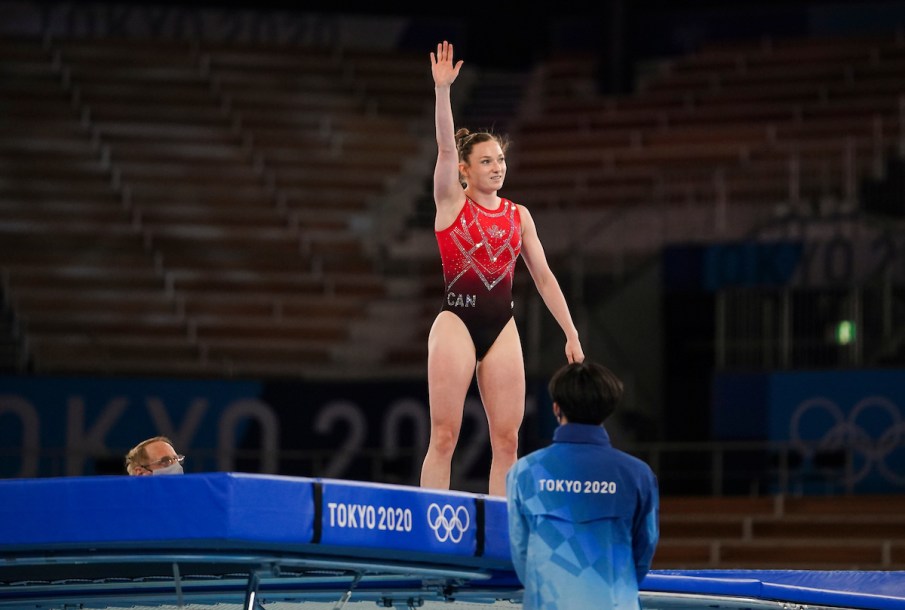 Nothing about Tokyo 2020 has been easy.

From the pandemic to the one-year postponement to the cancelled tournaments to the missed training time, just qualifying for this edition of the Olympic Games is an achievement. For some members of Team Canada, the road to Tokyo involved even more speed bumps.

Here’s a look at some of the Team Canada athletes who faced adversity head on and made us all so proud.

Less than two months before Tokyo 2020, Kasia Gruchalla-Wesierski was in a bike crash that resulted in a broken collarbone, bruised hip and over 50 stitches. But she refused to give up on her Olympic dream, even while teammate Rebecca Zimmerman took her place in the eight to keep the crew training. Gruchalla-Wesierski not only rowed with the women’s eight in Tokyo, she helped the crew win Canada’s first gold in the event since Barcelona 1992.

Ellie Black tore multiple ligaments in her ankle while competing at the World Artistic Gymnastics Championships in 2019, which required surgery to repair. She planned to be healthy for Tokyo in the summer of 2020 – then the pandemic happened and delayed the Games by a year. This past June she suffered an injury in her other ankle and then aggravated it in Tokyo, forcing her to pull out of the all-around final. She fought through the discomfort and participated in the beam final, placing fourth — Canada’s best ever Olympic result in women’s artistic gymnastics.

Three weeks before Tokyo 2020, Caeli McKay, a first-time Olympian, twisted her ankle badly in training, tearing ligaments in her foot, and was told by doctors she would need 8-10 weeks to recover. She arrived in Tokyo in a walking boot and performed admirably, just missing the podium in the women’s 10m synchronized event with partner Meaghan Benfeito. Following their final media conference in Tokyo, Benfeito carried McKay out of the room on her back.

Rosie MacLennan is well known for her back-to-back Olympic gold medals in trampoline. But what wasn’t known by many was that MacLennan had been on crutches just six weeks prior to Tokyo, after tearing multiple ligaments in her ankle along with multiple bone bruises. MacLennan nearly reached the podium for a third straight Olympic Games despite the injury.

Melissa Bishop-Nriagu competed for Canada at London 2012 and Rio 2016, finishing fourth in the 800m at the latter. After taking 2018 off to give birth to her daughter, Corinne, Bishop-Nriagu opted to cut her return to competition short in 2019 because of difficulties with her post-pregnancy body meeting her high training demands. She then turned her attention to recovery and preparation for Tokyo. She not only qualified for her third Olympic Games, but she posted her fastest time in nearly four years just before departure, running 1:58.36. After being unable to advance from the opening heats, Bishop-Nriagu revealed that she wasn’t even sure she’d be able to race in her third Olympic Games.

A boxer who finished fifth at Rio 2016, Mandy Bujold is known for her fighting — but, for Tokyo 2020, her biggest fight came outside of the ring. Bujold was pregnant with her daughter in 2018 and took off most of 2019 to be with her. The pandemic cancelled her 2020 qualifying event, meaning the qualification rankings for Tokyo would be based off events she didn’t take part in. Her first appeal was denied but she — along with future pregnant and postpartum women — got a win with the Court of Arbitration for Sport, allowing her to participate in Tokyo.

Annie Guglia is one of Canada’s most successful skateboarders, even writing her master’s thesis on the skateboard industry. Guglia just missed out on qualifying for Tokyo, where skateboarding was making its Olympic debut. Then came some surprising news: Guglia was added to Team Canada’s roster a day before the women’s street event as an injury replacement. “Dreams do to come true,” Guglia wrote on Instagram.

After winning 100m freestyle bronze at London 2012, Brent Hayden announced his retirement, saying he had lost his love of swimming. Seven years later, Hayden returned to the pool with his eye on Tokyo. At Canada’s Olympic Swimming Trials, the 37-year-old won the men’s 50m freestyle with his second-fastest time ever to earn a spot on his fourth Olympic team. He helped the 4x100m freestyle relay come within one spot of standing on the podium.

Softball pitcher Sara Groenewegen missed the 2018 World Championships after being diagnosed with Legionnaires’ disease and was placed in a medically induced coma for 10 days. She made a full recovery and was back pitching for Canada at Lima 2019. Groenewegen started five of six games for Canada at Tokyo 2020, posting a 1.05 ERA in 13 1/3 innings to help the team win a bronze medal.

Antoine Valois-Fortier battled through injuries and recoveries to make his way to Tokyo. After winning bronze at London 2012 and placing seventh at Rio 2016, the 31-year old overcame hip surgery, back surgery for two herniated discs, and he skipped the 2021 World Championships to recover from an injury sustained earlier in the year.