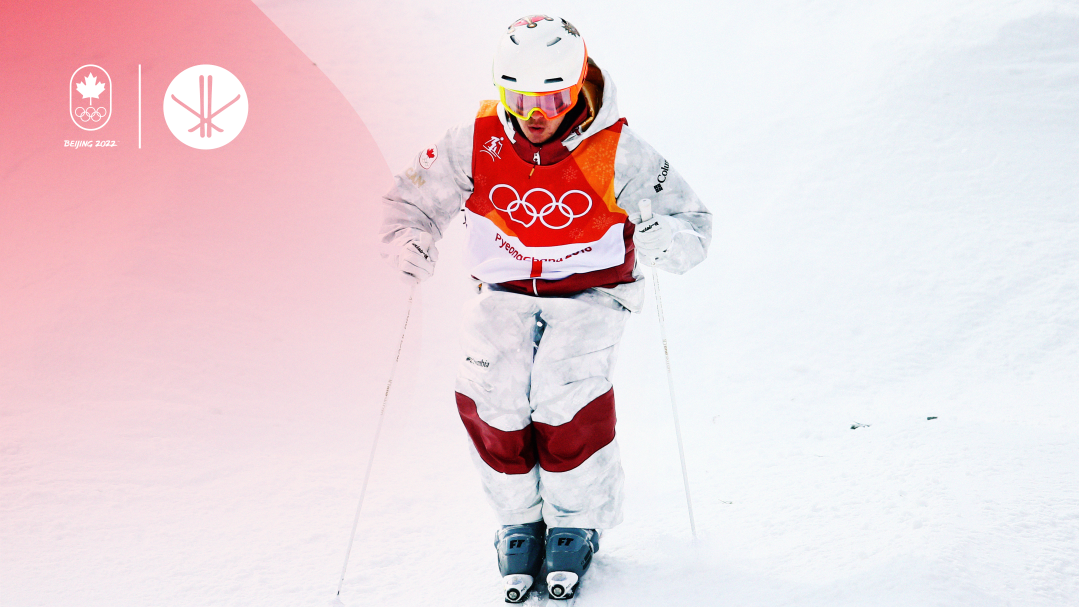 Team Canada will have its largest Olympic freestyle skiing team ever at Beijing 2022.

There will be 24 athletes competing across four different disciplines: five in moguls, six in aerials, seven in slopestyle/big air, and six in halfpipe.

Whether you call him the G.O.A.T or the king, Mikaël Kingsbury is undoubtedly the most dominant athlete ever in his discipline. The reigning Olympic champion heads to his third Games not long after earning his 101st career World Cup podium in just 120 starts. That includes an incredible 71 victories. He’s also a three-time world champion in moguls, which includes back-to-back crowns in 2019 and 2021.

“It’s always an honour for me to represent Canada on the world’s largest stage,” said Kingsbury. “This will mark my third Olympic Games and each time I feel the same pride. This is the culmination of the last four years of work, and I look forward to being in Beijing with all the other athletes from Canada.”

He’ll be joined in the men’s moguls by Olympic rookie Laurent Dumais, who finished sixth at the 2021 World Championships and has three career World Cup podiums.

Sisters Chloé and Justine Dufour-Lapointe are off to their third straight Games together. After memorably sharing the podium at Sochi 2014, Justine added a silver medal at PyeongChang 2018. Chloé will make some history in Beijing as the first female Canadian freestyle skier to compete in four Olympic Games.

Sofiane Gagnon will be the debutant on the women’s moguls team at 22 years old. She’s been competing on the World Cup circuit since 2018.

The only returning Olympian among the six aerialists is Lewis Irving, who has shown what he’s capable of with his six World Cup podiums. Also competing in the men’s event will be Miha Fontaine and Émile Nadeau, who are both just 18 years old and in the midst of their second World Cup seasons. Fontaine is the son of Nicolas Fontaine who won silver when aerials was a demonstration event at Albertville 1992 and went on to make three official Olympic appearances.

Marion Thénault will lead the women’s aerials team. The former gymnast didn’t even know how to ski when she was recruited via RBC Training Ground in 2017 but within the last year has stood on three World Cup podiums. She’ll be joined by 19-year-old Flavie Aumond, who recently broke into the top-five in a World Cup, and 22-year-old Naomy Boudreau-Guertin, who is enjoying her first full World Cup season.

New to the Olympic program this year will be a mixed team aerials event, in addition to the individual events.

The other new freestyle event is big air, in which the men and women who compete in slopestyle will also be entered. Canada’s contingent will bring with them a multitude of medals from major international competitions.

Teal Harle and Evan McEachran will be competing at their second Games after finishing fifth and sixth, respectively, in slopestyle at PyeongChang 2018. Among the standout performances from the first timers is Édouard Therriault’s big air bronze in his first appearance at the senior FIS World Championships in 2021.

It was also last year that Megan Oldham reached both the big air and slopestyle podiums at the X Games in Aspen before winning a world bronze medal in slopestyle. At just 17 and on the heels of winning her first X Games medal, Olivia Asselin will be the second-youngest athlete on the entire Canadian Olympic Team.

Cassie Sharpe is the reigning Olympic champion in women’s halfpipe, but is on the comeback trail this season after a bad knee injury last January. Rachael Karker won silver at the 2021 World Championships and was on the podium at three straight X Games (2019-21). She won the overall World Cup title in halfpipe last season.

In men’s halfpipe, Brendan Mackay is the overall World Cup champion for this season after winning two gold and one bronze on the circuit. Noah Bowman and Simon d’Artois both have world championship medals to their credit.

These athletes join the eight who were previously nominated to compete in ski cross, which is also classified as a freestyle skiing event at the Olympic Games.

Since being officially added to the Olympic program at Albertville 1992, freestyle skiing has become one of Canada’s most successful winter sports with 25 medals (12 gold, 9 silver, 4 bronze), ranking it only behind long track speed skating, short track speed skating, and figure skating all time.

Most freestyle skiing events at Beijing 2022 will take place at the Genting Snow Park in Zhangjiakou, except for the big air events being held at the Big Air Shougang in Beijing. Competition will begin on February 3, the day before the Opening Ceremony, and continue almost daily until February 19.