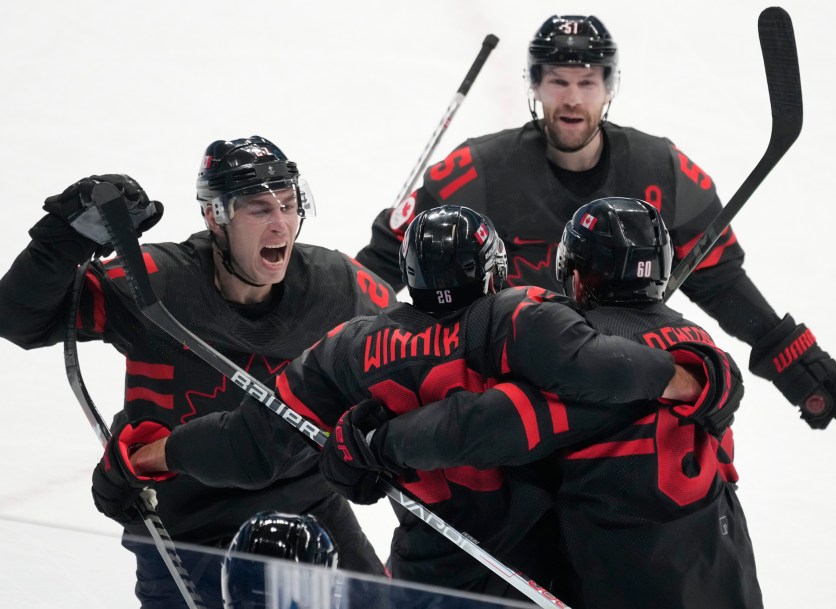 Team Canada began the Beijing 2022 men’s hockey tournament with a bit of revenge.

Canada opened their preliminary round play with a 5-1 victory over Germany at Wukesong Sports Centre. Germany defeated Canada in the semifinals at PyeongChang 2018, ending a shot at gold for the Canadians.

Five different Canadians scored in their win over a German team that features 10 returning players from PyeongChang. Alex Grant, Ben Street, Daniel Winnik, Maxim Noreau and Jordan Weal all found the scoreboard for the Canadians. Edward Pasquale made 23 stops to earn the win in net.

Was that semifinal loss in 2018 top of mind for any returning players?

“Not really, but it is in the back of your mind,” said Eric O’Dell. “It was a tough loss and it felt good to get the win today.”

Grant opened the scoring at 4:43 of the first period. After O’Dell rocked Marco Nowak with a huge hit behind the goal line, the puck came back to the point where the Antigonish, N.S. native wired a shot upstairs on German netminder Mathias Niederberger.

“He came around the net with his head down and I finished my check,” O’Dell said of the hit. “The team built off that and we got a couple of goals after that, so it was good.”

Canada kept rolling with Street scoring at 9:47. After a battle in the corner, O’Dell fed Street in the circle who ripped a one time shot past Niederberger. Less than a minute later at 10:19, Adam Cracknell fed Winnik in the slot to give the Canadians a 3-0 advantage.

Canada’s penalty kill was busy in the final minutes of the first, successfully killing off back-to-back German power plays along with a late delay of game penalty that was handed to Josh Ho-Sang, which carried into the second period.

Germany got on the board at 10:45 of the middle frame. A Canadian pass attempt was stopped, allowing Tobias Rieder to score and make it a 3-1 game.

Weal, left all alone in front of the net, gave Canada a 5-1 at 11:22 of the third. The Canadians had a strong defensive showing in the third, allowing very few German scoring chances.

“It was a great start and it was everything you hope for happens,” said Grant of his team’s performance.

“Anytime you get a start like that it is nice. It was overall a solid performance.”

Team Canada is back in action on Friday at 11:10 p.m. EST, taking on the United States. The team closes out the preliminary round on Sunday against China.

Canada is expected to have a familiar face behind the bench when they face the Americans. Head coach Claude Julien, who suffered an injury during the team’s training camp, has rejoined the team and will be behind the bench for the remainder of Beijing 2022.