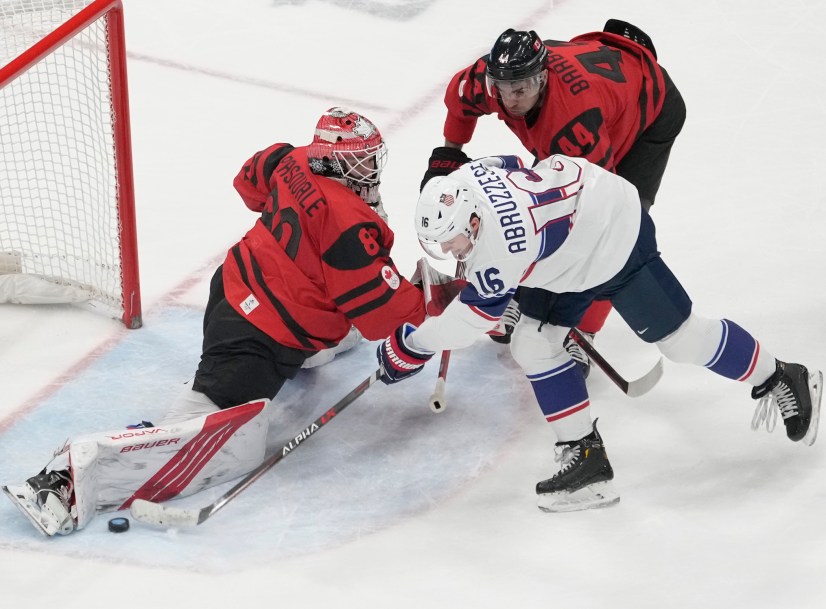 Mat Robinson and Corban Knight scored in Canada’s 4-2 loss to the Americans at National Indoor Stadium. It was the first meeting between the two rivals at an Olympic Games since the semifinals at Sochi 2014.

The loss drops Canada’s record to 1-1 in Beijing following a 5-1 win over Germany to open the tournament. The Canadians will play their final game of the preliminary round on Sunday at 8:10 a.m. ET against host China.

“We played into their hands on some shifts,” said defenseman Maxim Noreau. “They are a strong team and we gave them too much room on some of those goals. We will have to learn from that.

“There are no excuses. We have to get better.”

Canada opened the scoring early. Just 1:24 into the first period, Robinson threw the puck on net from the sideboards and beat a screened Strauss Mann in the American goal.

The United States quickly tied things up at 2:34. Andy Miele sped into the offensive zone and kept the puck on a two-on-one, firing a backhand shot over the glove of Canadian netminder Edward Pasquale.

Canada controlled most of the play in the opening half of the first period, outshooting the United States 11-3 at one point. The Americans started to gain momentum as the period went along, which included a great Nick Abruzzese chance that was denied by the pad of Pasquale.

The United States took a 2-1 lead into the intermission thanks to a goal from Ben Meyers with 1:16 remaining. The late period push by the Americans gave them 13 shots in the opening period compared to Canada’s 12.

Mason McTavish nearly tied the game 43 seconds into the second period, keeping the puck on a two-on-one and ringing a hard shot off the crossbar.

The United States extended their lead to 3-1 at 2:37. Pasquale turned the puck over behind his own net and couldn’t quite get back into position before Brendan Brisson scored.

Knight got Canada back within one at 14:13. While shorthanded, Daniel Winnik fed Knight on an odd man rush to make it 3-2.

The Canadians nearly tied it late in the third. On a power play, a Noreau point shot was deflected in front only to hit the crossbar and stay out.

Kenny Agostino restored the United States’ two-goal lead at 6:13 of the third. After a Canadian defensive turnover, the puck found Agostino who hammered a shot under the arm of Pasquale to make it 4-2.

The United States got into some penalty trouble late in the third period, giving the Canadians a 31-second five-on-three power play. Canada was able to move the puck around well and generate a few chances — including a McTavish shot that hit the post — but could not score.

“They (USA) started looking a lot faster and a lot more controlled,” forward Josh Ho-Sang said of the Americans. “In the third period, minus their goal, I think we dictated the pace for the whole period.”

Ho-Sang is confident the team can rebound in this short Olympic tournament.

“It’s definitely hard. We are working our best. We are watching video and we are talking to each other a lot. We will continue to get better as the tournament goes on, but that’s just hockey.”